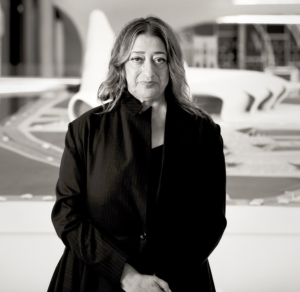 Born in Iraq, based in the UK, Dame Zaha Hadid (1950-2016) was one of the world’s most influential architects. She was the first woman to win The Royal Institute of British Architects annual gold medal in her own right. She led a pioneering studio whose buildings include the Guangzhou opera house, the London aquatics centre, and the Al Wakrah Stadium (for the World Cup in Qatar).

In this Q&A, Sofia Karim discusses the architecture of Zaha Hadid.

I was a student when Zaha Hadid burst onto the scene. She shook up everything, and we knew we were witnessing something different from what had come before.

Her visual language was dazzling. For a long time, she wasn’t given the opportunity to build, so she focused her energies on theoretical projects, expressed through her incredible paintings. Her paintings (made with a team of assistants I should add) are masterpieces in their own right.

She created fantastical worlds, pushing boundaries of what buildings and cities might be. What space itself might be.

Her gestures were bold. In her world, structures flew. Space defied gravity, unfolding into multiple perspectives, warping over time.

When her opportunity to build finally came, it was like a burst of energy. This language she had honed, emerged and crystallised into dream-like buildings.

Her work was a homage to the Russian constructivists, particularly the artist Malevitch. But she spun it with her own alchemy. With extreme perspectives, floating spaces, shards that scattered to infinity, she foresaw the world of virtual reality and advanced computational geometry.

Many of her contemporaries were exploring similar themes – her studio was associated with the wider avant-garde movements including Deconstructivism, and Parametricism. But her interpretation of it, her architectural signature, was so enticing – matched by her ambition to succeed – that she really outshone the rest.

What are the traits of a Zaha building?

Floors, walls, ceilings, merge. There is the lack of a true horizontal and a true vertical. A rejection of symmetry. There is a liquidity to the space, which loops, fractures and shatters into complex, layered geometries and multiple point perspectives.

All this comes together in what the public recognise as ‘sci-fi’, ‘futuristic’, or ‘Star-Wars’ buildings.

Her studio was at the forefront of computer-aided design in architecture, and construction technology. All this had to be pushed to realise her buildings. She brought science fiction to life.

The essence of her architecture can be summed up by the words Zaha herself used to describe the Phaeno Science centre, Germany, completed in 2005.

“The Phaeno is the most ambitious and complete statement of our quest for complex, dynamic and fluid spaces.”

“The visitor is faced with a degree of complexity and strangeness, ruled by a very specific system based on an unusual volumetric structural logic. The floors are neither piled above each other nor could they be seen as a single volume.” 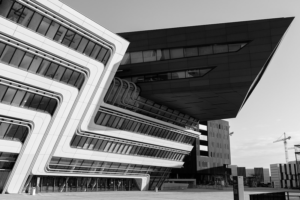 What is the significance of her role as a woman in the world of architecture?

It is said that Zaha “hated” being considered a female architect rather than an architect. As her career developed, she increasingly began to recognise that she was a role model to women in the industry and spoke up on these issues.

Zaha was open about the sexist and xenophobic climate she operated in and the enormous strength it took to survive. Her resilience was astonishing.

Her gutsy manner and fiery (at times abrasive) personality was shocking to the British establishment. She was called a Diva, to which she responded, “Would they still call me a diva if I was a man?”.

She did not shy away from expressing the feminine, in either her architectural language or her own image – her spectacular style of dress.

Her rise happened to coincide with the Iraq war and the wider War on Terror. She offered a counterpoint to the one-dimensional image of the Muslim woman perpetuated by the mainstream media. She painted a tender portrait of the Iraq she grew up in, the inverse of the ‘backward land’ the west was busy blowing up in an illegal war.

I would say she inspired hope for many Muslims, female architects in particular.

Zaha said, “In my case, I’m a woman and an Arab. Being an Arab woman and a modern architect certainly don’t exclude each other – when I was growing up in Iraq, there were many women architects. You cannot believe the enormous resistance I’ve faced just for being an Arab, and a woman on top of that. It is like a double-edged sword. The moment my woman-ness is accepted, the Arab-ness seems to become a problem.”

Are there traces of her Arab heritage in her work?

Most certainly. I see traces of it everywhere in her work. Her characteristic lines are like calligraphies, frozen in space. They appear again and again, in her sketchbooks, paintings and her buildings.

The architect Sir Peter Cook said: “she has ventured where few would dare: if Paul Klee took a line for a walk, then Zaha took the surfaces that were driven by that line out for a virtual dance.”

Her celebration of geometry and mathematics, consciously or unconsciously, follows the long tradition of Islamic art. (She studied mathematics in Beirut before she became an architect).

Marks and symbols she used on her canvases, and in her plans, (which she gave names like “whoosh” and “tic-tic”) are like the accents on characters in Arab script, suspended in three-dimensional space.

Her former teacher, colleague and long-time friend, architect Rem Koolhaas, said that the fact that Hadid had been born in Baghdad was hugely important to her work, and he found it strange that her obituaries had described her as a British architect rather than Arab.

“That is what I think may be her biggest achievement.” (Rem Koolhaas)

She was criticised for working with authoritarian regimes, wasn’t she?

Yes she was. Zaha Hadid certainly conjures up both admiration and controversy. She worked with states including Libya, Iraq, Russia, Qatar, China, and Azerbaijan.

She is by no means the only architect to have done so. Many well-known architects have designed buildings for regimes with a poor human rights record.

There are differing views on this moral conundrum. Rem Koolhaas believes it is Western arrogance to suggest that these regimes should be denied the cultural investments that the west itself enjoys. The argument being, presumably, that the west is hardly perfect itself.

Others believe that oppressive regimes use culture to whitewash their image. And architects who provide buildings for these purposes are, directly or indirectly, complicit.

There are elements of both positions that I agree with. Koolhaas is right. If you’re making a list of questionable regimes, you could certainly add western nations – both for their own record of domination and violence, and for the fact that they themselves support authoritarian regimes when it serves their own interests.

But I don’t think this gives an architect license to evade the issue.

I personally believe that an architect should be prepared to raise ethical concerns surrounding the projects they work on, both in the west and the east. This applies to projects for states or corporations, for example.

If as an architect, or artist, you find you are in a position where you cannot speak out against injustice, for fear of losing the project, or for other reasons, then you must question your own relationship with power and the extent to which you are beholden to it.

What about the criticisms in relation to her attitudes on migrant labour on construction sites?

Zaha was criticised for her involvement in the Qatar world cup stadium project. Qatar is of course, notorious for high numbers of migrant-worker deaths and its dismal treatment of workers. When asked if she was concerned, Zaha said:

“Yes, but I’m more concerned about the deaths in Iraq as well, so what do I do about that? I’m not taking it lightly but I think it’s for the government to look to take care of. It’s not my duty as an architect to look at it. I cannot do anything about it because I have no power to do anything about it. I think it’s a problem anywhere in the world. But, as I said, I think there are discrepancies all over the world.”

I think there is a problem when architects disconnect with the societies they build for and with the labour that builds their creations. Architects of Zaha’s stature cannot simultaneously say they are powerless to change the world, whilst proposing grand visions for global cities. They have built their careers off these visions. It is disingenuous to say they are not interested in changing the world.

They also know very well that governments will not just fix things by themselves.

Architects of Hadid’s standing don’t have to turn down commissions, but they could use their position to discuss these issues and explore them in their work. Otherwise, the sense of liberation – the spirituality that they seek to invoke in the experience of their architecture – is only superficial.

How many architects actually care to speak to the migrant workers that build their buildings? They will engage with almost every other member of the project chain. This is a terrible blind spot in the industry.

Architecture is a social practice, where moral choices become inescapable. Those architects who focus only on aesthetic vision, rather than social vision, must accept they have chosen to abrogate their responsibilities in some sense.

What do you think her legacy will be?

I think Zaha Hadid’s buildings will be regarded as singular in their artistic vision, as was she. Bold, brilliant, and one of a kind.

But I think they will also come to be seen as part of an era of decadence – Late Capitalism. By that I mean emblems of the neo-liberalist world order that pushed our planet towards the brink of extinction.

We are already facing a new dawn of architecture that rejects “iconic architecture,” architecture as financial speculation. Discourse is changing, prompted largely by climate emergency, as architects seek to inject moral/ social responsibility back into their remit. To reject the notion of value as economic growth. To release themselves from the stranglehold of the developer, whose only motivation is profit.

Hadid proposed “futuristic” buildings. Wonderful though they were, I think buildings of the future will be something very different.

Sofia Karim (architect, visual artist and activist) has practiced architecture for over 20 years at studios including Norman Foster’s in London and Peter Eisenman’s in New York. Her practice combines architecture, visual art, activism, and writing. She campaigns for Bangladesh human rights and global artists’ freedom of expression.