Joachim Trier´s The Worst Person in the World (Verdens verste menneske) has left the world in unanimous awe since its initial release in October last year. The film is the third and final addition to the director´s Oslo trilogy, the previous two instalments being Reprise (2006) and Oslo, August 31st(2011). The city of Oslo is the common ground and plays a vital character in these films as the plot unfolds. The trilogy carries a very realistic resume of human life and what it means to live as one´s own self with all our flaws and edges. Trier´s portrayal of one´s daily life and the tantalizing glimpses of greatness in regular mundane routines is praiseworthy. The Worst Person in the World has recently received 2 Academy Awards nominations for Best International Feature Film and Best Original Screenplay.

The age-old question: am I just the worst person in the world? Human lives are far too complicated to make sense. There are far too many choices to make and so little time to make them. Most people believe there is no room to make wrong choices, no time to remedy our mistakes. However, that is simply not true. Nobody gets it right at once. In fact, life is full of mistakes, regrets, unspoken words, repressed sentiments, and constantly lying to ourselves. We are always lying, and most of the time, it´s in front of the mirror. The Worst Person in the World mainly explores how it is to be the imperfect human that we are. It´s a Norwegian slice of life that speaks to anyone from around the world despite age, gender, sexuality, ethnicity, or background. A reflection of our choices and their consequences, the rapid, unpredictable flow of stream that is life. The film is a crisis of conscience.

Throughout the film, we follow our protagonist Julie through her 20s and 30s, starting from her university days, where she struggles to choose what she wants to study. Struggling with what to do in life is a very familiar feeling to many, even me. Nothing makes sense; the narrative of life becomes hazy and murky. There are so many options, but you can´t even get yourself to choose a single one of them. So many ways to go, but you find yourself standing still. Thoughts inside your head imprison you; your own body cripples you. What must one do to live life correctly? The audience witnesses Julie going through various stages in order to find the right answer. One moment she embraces technology, while she is discarding it entirely from her life the next second. A thousand ways to live life the right way, yet nothing feels right.

Enter Aksel, the second most important character of the film. Julie meets this much older, mature, experienced cartoonist at a party. She is immediately mesmerized by his witty and charming attitude. Despite starting as a fling, their relationship develops, and they fall in love with each other which leads to Julie moving in with him. The relationship she builds with Aksel is significantly different from her previous relationships. Here, she allows herself to engage in and practice many thought-provoking discussions with Aksel and his friends. She tries embracing the surrounding of her life with Aksel outside of what´s just between them. She is exposed to a new and frankly older crowd which provides her with unfamiliar insight and a different lens to view life. This new environment makes her feel mature, makes her think if she is surrounded by mature people who have their lives figured out, so must she. Julie senses a vague grip on her life finally. In a strange way, she tries to bask in Aksel´s successful and well-settled lifestyle to make herself feel in control like him but ultimately fails. It is not her life, career, and success after all. She cannot be defined by him or just an extension of him. She needs to be herself with all her imperfections and flaws.

Trier follows a recurring theme of  bad timing and place throughout the film. Not the right time to be with someone, not the right time to be a photographer, not the right time to be an author, not the right time to have children, and so on. Despite being melancholic, these are realistic themes that help viewers connect to his characters. In real life, sometimes these decisions are cruel, selfish, and hurt people around us. Julie suffers the same fate too. As mentioned earlier, she tries to fit in Aksel´s life but, in the end, fails to sync with his timing. Their relationship might have seemed like the perfect fit, but unfortunately, the nature of life made it impossible to work at that time. These difficult decisions can often be interpreted as even self-sabotaging as they tend to hamper more than benefit. They often make us question the goodness inside us and create an ethical dilemma. Is it truly human nature to put our own selfish needs first? Where will these selfish acts ultimately lead us? I mean, is there even a promised better future? Do I even deserve it after everything I have done hoping to achieve it? Am I just the worst person in the world?

This dialogue from the film perfectly sums up what Julie is going through and what the audience relates to. One often feels like a side character in their own life when they lack control over it and feel driven by other people´s actions. Not knowing what your heart desires but feeling its void regardless is frustrating. Feeling stuck, lost, and confused because the writer does not plan to finish your arc. If life is a film, it´s a cruel one.

Julie said she often feels like a spectator is also a universally relatable statement to most people going through a similar period. People often mistake growing up as being an adolescent, but truthfully one never stops growing up. Especially our 20s and 30s are critical to figuring out what life we even want to live. We are forced to practically live life in the sense of eating, existing, sleeping every day; however, that is not equivalent to living life in its truest form. Therefore, as long as we are not living life in that sense, we will always feel like a spectator observing another person going through their days without any purpose.

The speciality of the Oslo trilogy is to portray what could have been. Trier manages to explore this theme in Reprise and Oslo 31. August, too alongside The Worst Person in The World. To particularly highlight the scene where everything around Julie freezes as she explores a relationship she could’ve been in with Eivind. It is a very moving and touching scene layered with intimacy and deep desires of the human mind. Trier wonderfully visualizes the very notion of time stopping for her by showing an entire city freezing just so she can finally explore if she is going to make the right decision.

The camera work in this film is just brilliant! The same applies to cinematography, which is so delicate and perfectly crafted. The beautiful shots often resemble paintings. For example, when Julie and Eivind are sharing the smoke of their cigarettes, it creates this alluring series of frames that are just magical to watch. It feels more intimate and sensual than an actual kiss or any form of physical interaction. One of my personal favourites is when Julie observes Ole and his wife arguing by the shore then making up by sharing a passionate kiss as the waves hit the rocks. 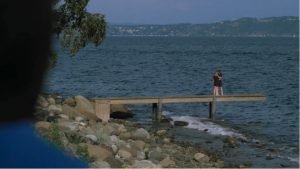 Everything about this frame has been polished to perfection. It´s romantic and daring, like the end of a fairytale. The furious waves thrashing against the solid rocks are almost a visual reflection of their marriage. Despite everything, they remain strong. It also shows the maturity of the couple and directly contradicts the dynamic between Aksel and Julie. Unlike Ole and his wife, Julie finds herself often drowning and gasping for breath in these waves.

The thin veil of civility makes humans so different from other animals. We live by a social contract, yet the true animalistic nature lingers underneath. Even the worst thoughts creep inside us. The only barrier between making those thoughts a reality is the notion of civility. Same for Julie, who dreams of hitting her father with bloody tampons for how he emotionally scarred her. She dreams of running away with someone else´s boyfriend while also being in a relationship herself. These thoughts are what we consider objectively wrong. However, human life is not limited to objective interpretation only. What we feel and think cannot always be justified by societal expectations or standards. The raw human emotion that lies within us cannot always be labelled. It is impossible to put all these emotions and sentiments in black and white boxes to evaluate them as good or bad. Trier exclusively studies human nature in this film.

Julie is not a likeable character; she is not even meant to be one. Nevertheless, she is an honest one. Many will see themselves in her, maybe not to the full extent always but in bits and pieces. The speciality of this film is it caters to everyone around the world. Instead of focusing on what it is to be defined by social, biological, cultural, or intellectual identities, the film focuses on what it is to be simply human. Trier wonderfully connected all the factors which make our experience on this earth so similar.

The Worst Person in The World is a fresh approach to the terribly painful and excruciating experience of what it is to be alive. Our relationships don´t last forever, but the shared memory of love and heartbreak does. We are scared of changes, but change is inevitable at the end of the day. Fumbling through the dark, we hope to find the right direction; we hope to learn how to change. Often we make mistakes and choose ourselves over everything. We are flawed deep within, punishing ourselves for it instead of embracing it. Why waste time lamenting, scared it will slip away when you can cherish it right now. This film understands that it is okay to change, to let go, and to be imperfect. Life is more than materialistic and mechanical achievements. There is no right way to live life, just your own way.