Wednesday, February 19
Latest
You are at:Home»Magazine»Issue 12»Bangladesh and the crisis of freedom of speech | Ahmedur Rashid Chowdhury 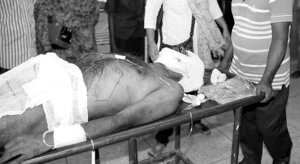 Bangladesh is a small nation in South Asia, gaining independence in 1971. After 24 years of existence under the religious defined Pakistan, created at the end of the British Raj, Bangladesh was born based on a nationalism centred on language. The aspirations of economic, political and intellectual emancipation accelerated and organised the country’s birth. All those who fought valiantly for the country, who participated in the Liberation War, had bet their lives on this auspicious outcome.

We reflected this pursuit in the first constitution of Bangladesh. The character, features and commitments of a new nation were clearly set out in the document. A democratic state system based on liberalism, secularism, non-sectarianism and social equality was clearly fleshed out. This allowed the citizens of Bangladesh to aspire towards a truly democratic state. However, post-independence, the state’s and political parties’ organisational weaknesses, the failure to enfranchise and spread political consciousness and values among the general public, and the military’s ambitions took the new country into complex and muddier waters.

Bangabandhu Sheikh Mujibur Rahman, the chief architect of Bangladesh’s independence and the father of the nation, was assassinated along with most of his family by the military in 1975. The constitution was suspended. Within just four years of taking its first steps as its own country, Bangladesh was being governed under the Chief Martial Law Administrator and Military Ordinance. Thus, a Bangladesh different to the dreams and emotions inspired by its liberation movement was beginning to take shape. The will of the military and its leadership was key in shaping politics towards selfishness and subornation. The constitution was continuously and destructively amended.

When political parties are willing to go to any length to hold on to power, it becomes inevitable that the state institutions become ineffective, and freedom of speech and freedom of press are inhibited and attacked.

Fundamentalists, supporters of the Pakistani agenda during 1971, and those who collaborated with the Pakistani Army in an attempt to prevent independence were allowed to rehabilitate themselves and rejoin the political sphere. We continue to face the legacy of that decision in the political and social crises that are damaging the country today.

The subsequent history is, sadly, known all too well. The healthy trend of democratic and progressive politics was never able to regain a footing in Bangladesh. Politicians continue to be malleable in their bid to retain power, all semblance of consistency and principle abandoned. Politics has been replaced by feudalism. Meaningful socio-political changes and the power of culture have been defeated by money and fundamentalist supremacy; their integrity mortgaged away. Professional organisations have become spineless in the face of pressure from political factions and have become unresponsive to their duties.

In this way, Bangladesh has experienced direct military rule and the fundamentalist political elements in the country have expanded their reach. Indeed, the current government, allegedly democratic but in reality a one-party dictatorship in the aftermath of the previous general election, has failed to come out of the shadow of the political culture of military rule. When political parties are willing to go to any length to hold on to power, it becomes inevitable that the state institutions become ineffective, and freedom of speech and freedom of press are inhibited and attacked.

It is evident to see that, in the same way that military rule, opportunistic politics and endless corruption can stifle socio-political evolution and prevent an effective civil society from developing, so too can a sense of disengagement amongst the middle class give way to political apathy. Unfortunately, all of these symptoms can be seen in Bangladesh today.

In 1973, the poet Daud Haider apparently hurt religious sentiments and the government responded by first arresting him and then sending him into exile. In 1994, writer Taslima Nasrin had to flee the country for similar reasons. A bounty on her head was publicly announced. Despite the illegality of such actions, the government did not take any legal actions against the announcement. More recently, we have witnessed the toothless, propitiating speeches of the government and its leader when responding to the murders of bloggers in recent years.

The response of the government and law enforcement, and the mentality of the populace ,have encouraged fundamentalist forces. It is possible to understand the extent of free speech in Bangladesh, or the lack thereof, by simply looking at these examples. It is the inherent duty of the state to ensure the safety and security of all its citizens. However, when the head of government publicly proclaims that victims of violence need to be wary of what they say lest ample security cannot be provided to them, citizens inevitably start to censor their own words.

When the murderer of a journalist couple still roams free years after the killing, and is not even put to trial, it is not difficult to understand the extent to which freedom of the press is being suppressed. As a publisher, it is painful for me to see that the government is yet to launch an effective investigation following the deaths of Avijit Roy and Ananta Bijoy Das.

It is clear that the failures in these cases have been the deliberate goal of the government. It supports their ambition to continue holding on to power by silencing critics and pandering to the religious right. In fact, there are even some allegations that the government and military have a direct involvement with the planning and execution of these attacks. In society, there is a hope that when this kind of oppression exists, people are able to respond by speaking, writing and publishing spontaneously and freely. Yet, it is an open secret that the media in Bangladesh is engaging in rampant self-censorship.

Countering religious extremism and becoming mindful of the needs of society is the responsibility of political parties and the state. If the state does not practice good governance, and if the political parties are not willing to censure their members for the welfare of the people, then it is inevitable that the present situation would arise. Regrettably, the unrest that devours society due to such circumstances mostly affects individuals who are already most at risk. Human development is interrupted, economic activities are stalled, there is social upheaval and a clear deprivation of empathy and values.

With all of these concerns, the context of freedom of speech is vital. Free speech in light of the present situation in Bangladesh is, quite literally, a jewel held captive in a showcase.

This piece, “Bangladesh and the crisis of freedom of speech” by Ahmedur Rashid Chowdhury was originally published in   http://theasiadialogue.com on March 21, 2018.

Bangladesh and the crisis of freedom of speech

This site uses Akismet to reduce spam. Learn how your comment data is processed.