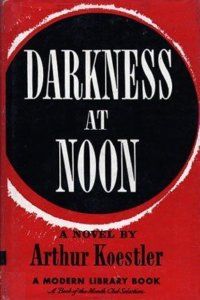 Sitting on the rooftop under the boiling sun at 2 pm while the temperature is above 32° and with a book in hand might sound a bit crazy, but that is something I do when I get too annoyed with human contact. But today isn’t a very sunny day. I can feel a storm coming just after I finish reading. Coincidentally, it’s noon, the sky is getting dark, and the book in my hand is nothing but Darkness at Noon.

I look at the sky as clouds gather closer every moment, taking all the light away. But I don’t mind because darkness is the reason why light comes. What I learnt from this book is that when darkness tries to take over, being persistent and waiting for the light to come makes the world a better place to live in.

This book by Arthur Koestler may not be as big or long as other novels, but it is a book I recommend to anyone with an interest in the history of communism or, to be exact, ‘communism in Russia’. Though this book is historical fiction and does not mention the name of a country, any political party or person, it is very clear that it reassembles the rule of communist leader Stalin who was the General Secretary of  the Communist Party of Soviet Union during the great purge in which over a million were arrested and 700,000 were executed.

The story line centers on the character Rubashov, who is a kind of composite of the old Bolsheviks. He is one of the most senior members of the party whose position is right beneath ‘Number One’ – none other than Stalin himself. One night, Rubashov was asleep dreaming about getting arrested, and he heard a knock at his door. That same night he was taken to prison. On his way, he had the company of a young and an old officer. The old one was very polite and gentle, but the young one was very arrogant. This contrast between the two officers symbolises the name of the book, revealing how the new generation’s dark side is taking over the enlightened senior citizens.

The book is basically divided into three parts. The first hearing, the second hearing, and the grammatical fiction.

Imprisoned, Rubashov is initially relieved that his anxiety and dread during this period of mass arrests is over. He is expecting to be kept in solitary confinement until he is shot. He begins to communicate with No. 402, the man in the adjacent cell, by using a tap code. Rubashov quickly realises that they don’t have much to discuss. The man is an Army officer who is happy to see a communist arrested, and their points of views differ. But their thoughts about the current method of gaining socialist utopia was very similar, and this brought them closer.

Rubashov thinks about Old Bolsheviks, Number One, and the torture done by them in order to gain a goal which is unreal at this point. But the belief they have put inside people’s mind makes them feel like this torture is tolerable for the sake of a better future. Rubashov, sitting in the cell waiting for death, thinks about how wrong he was, and how a person like him who was a follower of communism turned into such a monster for the party.

After a week in prison, Rubashov is taken to the first hearing, which is conducted by his friend Ivanov, also a veteran of the civil war. After his friend had lost his leg in the war, Rubashov was the one who convinced him not to commit suicide. Ivanov offered him an exchange for his life: if he confessed his charges, he will turn death sentence into five to ten years of prison so that they can watch the socialist utopia they have established together. But Rubashov didn’t accept the offer and said he was tired of being sent back to prison.

Ivanov and a junior examiner, Gletkin, discuss Rubashov’s fate in the prison canteen. Gletkin urges using harsh, physical methods to demoralise the prisoner and force his confession, while Ivanov insists that Rubashov will confess once he realises it is the only ‘logical’ thing to do, given his situation. But Gletkin reminds him that the only way prisoners confess was through torture and later death. And that is how the goal of socialistic utopia is established. Ivonav feels disgusted and yet agrees with him.

As Rubashov refuses to confess, Gletkin takes the responsibility. He himself, being a war veteran, has suffered torture but yet still advocates for it. He applies his method to bring out a fake confession. He finally succeeds. While confessing, Rubashov looks back at his work: how he betrayed agents like Richard, Lowey, and Arlova in the past; how ruthless he acted in order to achieve his goals. Now all those memories return to him, much like the idea of ‘karma.’ It reminds me of that old saying, “what goes around, comes around.” In the end of the story, Rubashov is killed.

In the story, Rubashov’s fate demonstrates the most far-reaching feature of the totalitarian state, and that is mind control. It is not simply that citizens are forbidden to question the regime. The effect of a total dictatorship is to destroy the concept of objective reality. Truth becomes not what is objectively observed or remembered, but instead, whatever ‘Number One,’ the leader, declares it to be. Rubashov is manipulated into stating, and even believing, not what he knew as truth, but what the regime tells him is true.

What Koestler tried to show with this book is that Stalinism and its brand of totalitarian control were essentially no different from a Fascist regime. He himself was a communist party member, and during the time he wrote this book, most left-wing people denied that such things were happening in the Soviet Union, or they were totally unaware of it. At that time, talking against a superpower who claimed to uphold the same belief as the writer was a significant risk. But because he didn’t fear taking that risk, we now have one of the finest books in history. It’s not just my opinion, but ‘100 best English-language novels of the 20th century’ ranks it eighth on their list.  You should put this book on your reading list, or you will be missing out on one of the best books written against fascism.