Wednesday, May 27
Latest
You are at:Home»Magazine»Issue 14»Brunei’s Sharia Law: An Impetus for a Renewed Conversation on Islam, Sexuality, and Global Politics | Shakhawat Hossain Rajeeb 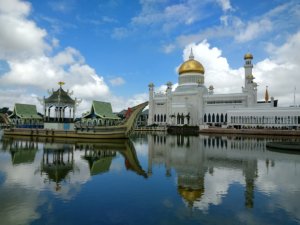 On April 03, 2019, the Syariah Penal Code went into full effect in Brunei. The law, which was first introduced in 2013, went through several phases of implementation despite the global outcry. The new code poses grave threats to fundamental human rights and discriminates against the country’s most vulnerable groups, including children, women, and religious and sexual minorities. The oil-rich sultanate of less than half a million people is now the first Southeast Asian country to adopt Islamic criminal law at the national level, reflecting a regional shift toward an increasingly conservative interpretation of Islam.

Brunei, one of the world’s smallest countries and few remaining absolute monarchies, has a legal system that is based on British common law with a parallel Sharia law system for Muslims that was previously limited to governing custody rights and marital matters.

This has brought forth another onslaught of Western criticism against Islam and the much talked-about-yet-less-understood Sharia system. The global outrage, especially coming from the US, has selectively focused on the application of the death penalty by stoning for offences such as blasphemy and illicit sex acts such as sodomy, rape, and extra-marital sex. The media exposed the Sultan Hassanal Bolkiah’s own non-compliancy with Sharia with click-bait headlines while the who’s who of Hollywood led a campaign to boycott businesses owned by Brunei. As usual, the conversations followed the tired trope of Islamophobia painting the Muslim-majority countries as backdated, dangerous and in need of salvation. In another end of the spectrum, queer people in Muslim-majority countries are bearing the brunt of violent extremism fueled by a plethora of complex, global and local realities. Looking at Islam through these two binary and myopic lenses misses out on the opportunity to critically engage in a conversation that is nuanced, informed and contextual.

This write-up, conceived as a 3-part series, will use Brunei’s Sharia law as a springboard to touch upon some discourses regarding Islam’s stance on non-normative sexualities and genders, effects of colonialism, Islamist extremism, and the growing movement of queer Muslims.

Sharia as a legal system

In Arabic, the word “sharia” means “way” or “path”. It is the overall way of life of Islam, as people understand it according to traditional, early interpretations. It includes Islamic principles to help guide people to new answers, and it includes common cultural practices that had to do with a specific time and place in history.

After the demise of Prophet Mohammad, people needed a way to figure out answers based on the Qur’an and Hadith. They started looking for patterns and principles based on the life of the Prophet. These patterns and principles were put together into a system, along with specific rules in the Qur’an and Hadith, so people could figure out the answers to their questions. The people who put the traditional interpretations of Sharia together also included some other things, like common practices from their time and cultural practices from their area of the world. Which is why there is no one set view of Sharia shared among Muslims, rather, there are a wide variety of interpretations.

There is a distinction between Sharia and the Islamic laws. Sharia isn’t a legal system. The successive Muslim rulers wanted a way to make Sharia into law. To do that, first they decided which rules needed to be laws and then used interpretations of Sharia to show people that the new laws were Islamic. The result was what we call Islamic Law.[1]

There are other sources of law: ijma (consensus), qiyas (analogy), and ijtihad (progressive reasoning by analogy). More recently progressive scholars have called for new ijtihad to meet the changing needs of modern Islamic societies.

Sharia as a tool for political mileage

Sultan Hassanal Bolkiah, the 72-year old monarch who has ruled the wealthy Borneo enclave for 51 years, has called for Islamic teachings to gain prominence in the country and assured that Brunei “will always be devoted to Allah.”The broader penal code has support among Bruneians who see its implementation as an expression of religious and national identity, with many voicing support for the move on social media. Others are unhappy with the international outcry and feel the issue is misunderstood and misrepresented in some mainstream Western media coverage. The government has very successfully monopolized Islamic discourse to the state-brand of Islam. There is no legitimate space in the public sphere for any other interpretation. In that sense, the bureaucratization of Islam in Brunei is monolithic, very hegemonic, and effective in controlling dissent.

A former British protectorate that gained independence in 1984, Brunei provides generous policies for its citizens including zero taxes, subsidized housing and free healthcare and education. Political parties are banned while the sultan holds full executive powers, is not liable to any legal proceedings, and constitutionally “can do no wrong.” However, the economy of the country has witnessed a recession in recent times as oil prices plummeted and its crude reserve declined. Unless new fuel sources are discovered, research projections suggest that Brunei’s oil and gas reserves will be depleted within two decades at the current pace of extraction. The government aims to transform the country into a regional trading and financial hub within the next two decades. Though the officials insist that the economic downturn is temporary and will soon rebound, the population has begun to feel the heat of the meltdown with growing concern, which the Sultan fears will spill over to his lavish lifestyle as one of the wealthiest persons in the world.

It can be argued that the introduction of the Sharia is counter-intuitive when the country is in need of direct foreign investment. However, experts believe the Muslim-majority nation’s implementation of punishments that may scare off Western businesses also signals a shift towards investment from China, which typically refrains from criticizing trading partners on human rights. As in many other parts of Asia, Chinese companies are investing huge sums in the absolute monarchy, part of an infrastructure drive aimed at extending Beijing’s economic and geopolitical clout. Initiatives include a multi-billion-dollar oil refinery – Brunei’s largest foreign investment project – a dam and a highway. Xi Jinping visited the country in November last year, the first trip by a Chinese president in 13 years.

Questions have been raised over the extent to which the harsh new measures will actually be implemented. While capital punishment has long been on the books, Brunei hasn’t carried out an execution since 1957, when it was still under British rule. The burden of proof is high before someone can be sentenced to death by stoning. An accused person must either confess to the offence or the crime must be witnessed by at least four people who must then testify. In fact, following the global uproar and boycotting of Brunei owned business, the Sultan on May 5 announced that the de facto moratorium on the execution of death penalty that the country has been practicing would extend to the crimes mentioned in the Syariah Penal Code, including adultery and gay sex.

This whole episode with the Sharia law and the backtracking from its implementation is an indication of the hypocrisy of the Sultan who wants to be just enough ‘Muslim’ for his conservative electorate and cement his hold on absolute monarchy for years to come. Any further talk of religion is superfluous at this point.

Islamic laws as a product of colonization

Early Islamic societies were ruled by caliphs and later by kings and emperors. These rulers mixed Islamic ideas with secular rules that were already in place or that had been the common practice. These early Muslim empires did not have what we now call “law”, with the government making laws that apply to all people and enforcing the laws everywhere in the same way. Communities of Muslims applied Sharia in their own informal ways.

For example, the parties in a legal case would select the mazhab they wanted to apply to their case. They would select a judge who was an expert in that mazhab and present their case. That way both parties gave the judge the authority to make a decision. They knew the judgment was consistent with their own beliefs, and they could accept that the decision of the judge was valid. However, colonization changed that. Traditional application of Sharia by communities was replaced by European-style laws that were developed so the government could enforce them.

In the 1800s, colonial powers created secular courts, especially to deal with civil and criminal cases using colonial laws. But it happened differently in family law. For family law matters, government officials selected particular principles of Sharia to be turned into laws, based on their own preference. Sometimes the rulers mixed very different views from different scholars, turning them into rules that none of the scholars would accept as valid.

After independence, Muslim rulers continued trying to apply Sharia as law based on the system they were used to—the colonial system. The result was an Islamic Family Law (IFL) that is very similar to the European laws from the colonial time.[3] To make these laws more acceptable to people, Islamic governments say that the family law is “Islamic.” This adoption of the colonial practices has stripped Sharia off its fluidity, contextuality, and pluralism.

Family law has been used as a “token” that rulers could offer to religious leaders, so the they wouldn’t object to other secular laws, such as those concerning business or usury (interest-based banking and loans). Colonial powers often controlled everything except family law. Even Muslim rulers often have left this area of law to religious scholars as a way to keep peace and gain political support. For that reason, IFL has become a symbol of Muslim religious identity. Even when IFL is unjust toward women and minority groups, some Muslims feel that giving it up will mean the end of Islam. The battle over IFL has become a battle for Muslim identity, rather than a battle for what is right in principle—or what is truly Islamic.

Furthermore, the idea of an Islamic state is not borne from Islamic culture.The idea stems from a European view where legal code of life is valued and the state is a totalitarian entity that seeks to shape the society in the state’s image. Historically, Islamic societies have differentiated between the state and the religious institutions. Allowing a state to force its view upon unwilling citizens violates the principles of Islam that teach individuals to live through personal choice and accept differences and disagreements with others.

It is important to observe that many of these countries under the colonial rule also inherited the laws criminalizing non-normative sexualities and genders. Brunei already punishes same-sex relationship with imprisonment up to 10 years. It does not need Sharia to convict gay individuals since it is much easier under the existing criminal code. What Sharia adds, according to the officials, is “to educate, deter, rehabilitate and nurture rather than to punish”, which means a complete control on the private lives of individual.

The introduction of the Sharia system in Brunei is the perfect example of a post-colonial state trying to establish its own identity and tradition based on an interpretation of Islam that suits the ruling elite and the majority populace. Except for the name of the penal code, there is probably nothing Islamic about it.

Shakhawat Hossain Rajeeb is a gay rights activist who has worked with Boys of Bangladesh for 13 years before being forced to exile to Sweden, where he currently works with RFSL, the national Swedish LGBTQ organization.

[2] CE stands for Common Era. It is used with the Gregorian (Christian) calendar. CE is a secular term used instead of AD, which stands for Anno Domini and means “The Year of Our Lord”, a Christian-based reference to the birth of Jesus.

This site uses Akismet to reduce spam. Learn how your comment data is processed.