As nearly daily reporting in the U.S. highlights, the manufactured anger over Critical Race Theory (CRT) continues to influence directly and indirectly both public discourse as well as teaching and learning in U.S. schools. Books are being banned, and state legislation is restricting curriculum and teaching, often in response to outcries against the non-existent influence of CRT on education.

The anti-CRT movement is mostly a political movement grounded in misinformation. The essential misinformation includes how CRT is defined and the misunderstanding that CRT is taught in K-12 curriculum.

According to a report from UCLA’s Institute for Democracy, Education, and Access:

We found that at least 894 school districts, enrolling 17,743,850 students, or 35% of all K–12 students in the United States, have been impacted by local anti “CRT” efforts. Our survey and interviews demonstrate how such restriction efforts have been experienced inside schools as well as districts. We found that both state action and local activity have left many educators afraid to do their work. (p. vi)

A key explanation in the report highlights the power of using “CRT” as misinformation:

We put “CRT” in quotation marks throughout this report because so often the conflict campaign’s definition of “CRT” (like its description of actual K–12 practice) is a caricatured distortion by loud opponents as self-appointed “experts.” The conflict campaign thrives on caricature — on often distorting altogether both scholarship and K–12 educators’ efforts at accurate and inclusive education, deeming it (and particularly K–12 efforts to discuss the full scope of racism in our nation) wholly inappropriate for school. (p. vi)

The anti-CRT movement fits into, then, an ugly history of partisan politics, as Adam Laats details: “For a full century now, conservative politicians have attacked teachers to score easy political points.”

Let me offer an analogy for understanding what CRT is and why “teaching CRT” is mostly a misrepresentation of the scholarly theory.

For scientists, particularly in the field of medicine, seeking ways to understand disease, an initial challenge was not being able to see microscopic viruses and bacteria. Scientist came to the conclusion that the illness being confronted could not be explained by the visible and misattributed causes of that disease and its transmission.

In other words, they needed a different way to see the disease. Enter the microscope, a tool for seeing differently in order to understand a complex phenomenon (a disease and its transmission).

CRT is the microscope; in short, CRT is a theoretical lens that scholars use to focus on race and racism as a tool for better understanding a phenomenon that traditional explanations have not adequately explained.

To clarify, then, CRT is a scholarly tool (a set of claims about race and racism) that helps examine phenomena, typically related to institutional dynamics (U.S. legal system, policing, public education). CRT has its origin in legal studies, and at its core, CRT examines phenomena under the assumption that racial inequities cannot often be understood by simplistic explanations such as individual racism.

As Adrienne Dixon explains, CRT does influence some elements of legal and educational scholarship:

CRT is a theoretical framework that originated in legal scholarship in the late 1980s. The founding CRT scholars were dissatisfied with anti-discrimination laws and the legal scholarship that informed it because they felt it didn’t adequately address the role of race and racism and relied too heavily on incremental change. CRT was introduced to education in the 1990s to address similar dissatisfaction with research in education that scholars believed did not fully account for race and racism. Moreover, scholars felt that multicultural education had become co-opted and no longer had the potential to adequately address inequities in education writ large.

To clarify about the widespread misinformation about CRT, here are some key facts:

The Irony (for White People)

Now, let me explore why the attacks on CRT by white conservatives is ironic.

Let’s start with Ta-Nehisi Coates, whose writing is at the center of one of the most dramatic consequences of anti-CRT legislation—a teacher in Tennessee being fired for teaching an essay by Coates.

Coates gained much of his fame as a contemporary writer on race while working at The Atlantic; one of his most powerful pieces examined the Donald Sterling controversy, an NBA owner who lost his ownership because of documented racist behavior. Sterling represents, according to Coates, oafish racists, individuals who express and act on explicit racism. The oafish racist, the individual racist, as Coates explains, is likely far less common in the U.S., but also far easier to identify and address.

As a CRT scholar would acknowledge, oafish racists pose no problem to scholars; however, racism and racial inequity persist in ways that cannot be linked to individual racist behavior. CRT, then, would be a useful framework for trying to explain what Coates labels as “elegant racism”:

Elegant racism is invisible, supple, and enduring. It disguises itself in the national vocabulary, avoids epithets and didacticism. Grace is the singular marker of elegant racism. One should never underestimate the touch needed to, say, injure the voting rights of black people without ever saying their names. Elegant racism lives at the border of white shame. Elegant racism was the poll tax. Elegant racism is voter-ID laws.

Here are a few examples of just exactly how CRT is useful and even necessary for understanding situations exposing racial inequity.

First, consider the death of Tamir Rice, a 12-year-old who was identified by a police officer as a “‘Black male, maybe 20, black revolver, black handgun by him.'” Rice was shot and killed in just seconds by that officer. The shooting and killing of Rice fits into a large body of research showing that Black people are shot and killed at much higher rates than other races (for example, Black people shot 2.5 x more often than White people): 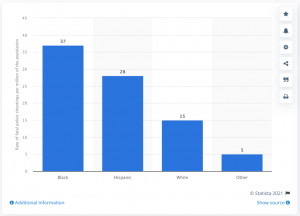 Rate of fatal police shootings in the United States from 2015 to November 2021, by ethnicity (per million of the population)

For legal scholars who have concluded that this racial rate inequity cannot be explained by simply identifying individual police officers as racists, CRT provides a process for understanding how and why the police officer shot and killed 12-year-old Rice.

Part of that explanation is systemic racism that influences everyone (regardless of their own race). For example, Black children are viewed as older than their biological ages:

The social category “children” defines a group of individuals who are perceived to be distinct, with essential characteristics including innocence and the need for protection (Haslam, Rothschild, & Ernst, 2000). The present research examined whether Black boys are given the protections of childhood equally to their peers. We tested 3 hypotheses: (a) that Black boys are seen as less “childlike” than their White peers, (b) that the characteristics associated with childhood will be applied less when thinking specifically about Black boys relative to White boys, and (c) that these trends would be exacerbated in contexts where Black males are dehumanized by associating them (implicitly) with apes (Goff, Eberhardt, Williams, & Jackson, 2008). We expected, derivative of these 3 principal hypotheses, that individuals would perceive Black boys as being more responsible for their actions and as being more appropriate targets for police violence. We find support for these hypotheses across 4 studies using laboratory, field, and translational (mixed laboratory/field) methods. We find converging evidence that Black boys are seen as older and less innocent and that they prompt a less essential conception of childhood than do their White same-age peers. Further, our findings demonstrate that the Black/ape association predicted actual racial disparities in police violence toward children. These data represent the first attitude/behavior matching of its kind in a policing context. Taken together, this research suggests that dehumanization is a uniquely dangerous intergroup attitude, that intergroup perception of children is underexplored, and that both topics should be research priorities.

The irony: While anti-CRT advocates attack CRT as a form of racism and argue CRT labels all White people as racist, CRT actually poses that the killing of Rice is not dependent on a racist police offer, but unexamined and unaddressed systemic biases against Black children. To repeat: CRT does not suggest that the individual, who in this case killed the 12-year-old Rice, is racist.

Again, ironically, training for police officers informed by CRT is the most effective mechanism for helping police officers recognize unconscious bias (viewing Black children as adults) and then change their behavior (resulting in fewer lives taken).

Finally, consider a couple more phenomena and the need for CRT as a tool to understand and address these inequities.

A report from Brookings identifies racial inequities between education and income (a racial gap identified in a large body of research): 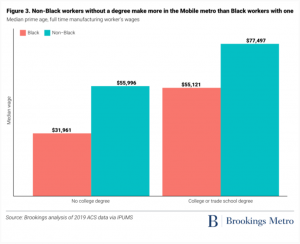 Perry, Barr, and Romer, then, confront a problem that cannot be explained simply by the impact of individual racists on income:

Our research reveals that the median earnings for Black workers in the manufacturing industry are a staggering $25,629 less than the median for non-Black workers. This racial earnings gap is so large that it is even more pronounced than the earnings gap between workers with degrees versus without. And education does not make up for the racial income gap [emphasis added]; our analysis shows that the median Black worker with a college or trade school degree in the manufacturing industry still makes $875 less than the median white worker with no degree.

Next, consider racial inequity in terms of education, detailed in a report from The Education Trust:

Black students are more likely to attend schools that have high percentages of novice teachers in almost every state across the country. For example:

The Education Trust finds a similar disparity for Latino students.

White denial of systemic racism not only fails against evidence but also proves to be self-defeating.

In all three phenomena above—racial inequities in police shootings, income, and access to non-novice teachers—CRT provides a tool for examining and addressing these problems that begins with the claim they are not the result from individual racism, but from systemic (and complicated) dynamics that everyone participates in unless they consciously commit to anti-racism practices.

For White people, then, CRT informed research on racial inequity that can unpack and identify the dynamics creating systemic racism can then be translated into policy and practices that eradicate those inequities—all without blaming individuals as racists.

Understanding and incorporating CRT as a tool for research and policy, then, is not a process for condemning all White people as racist. It is a pathway to racial harmony.

Being White is not a self-condemning status; however, refusing to acknowledge systemic racism and the need to find policies that create equity is a choice, one that perpetuates racism regardless of anyone’s beliefs about race.

The ultimate and ugly irony is that White refusal to understand and embrace CRT is self-defeating and harmful to everyone, regardless of race.

[2] As a critical scholar who identifies with Marxist educational theory, I must emphasize that although I have completed every level of formal education through a doctorate, I have never once been assigned any CRT text or lesson. Further, my understanding and study of Marxism have primarily been on my own, beginning with Marx’s non-economic writings (which I read by choice as an undergraduate after finding the book at a used book sale).

Critical Race Theory: What It Is. And What It Is Not. A Q&A With Adrienne Dixson

P. L. Thomas, Professor of Education (Furman University), taught high school English for 18 years in South Carolina before moving to teacher education and teaching first-year writing. He is author of How to End the Reading War and Serve the Literacy Needs of All Students: A Primer for Parents, Policy Makers, and People Who Care (IAP). Follow him at http://radicalscholarship.wordpress.com/ and @plthomasEdD.

1 thought on “Critical Race Theory: The Facts and Irony (for White People)”