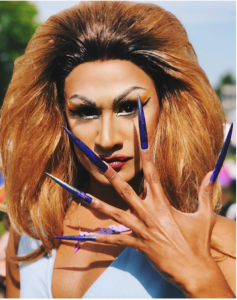 Having found myself in a pit of depression in summer 2021, with the weight of three lockdowns, two tumultuous years as a professional in the education sector, and a fractured relationship with family, I began introspecting the crevasses of my mind, desperately seeking an antidote to the maladies of my mind. Engrossed in books, hoping to find the answers, I recalled a text that had been recommended to me by a friend, The Velvet Rage. To avoid this becoming a book review, I’ll elaborate on the one aspect from my reading that stuck with me: splitting. Splitting, if you are not familiar, is a process whereby one conceals their authentic self in certain social crowds (e.g., family), putting on masks to propitiate for the sake of validation from others. As a queer British, South-Asian man, this is a phenomenon I am all too familiar with.

Drag and splitting have always gone hand-in-hand for me, ever since I began toying with the art in 2015, and perhaps even years earlier, ever since I discovered the global juggernaut, Drag Race. However, in 2015, my love for drag truly came to fruition as a close friend of mine and I began toying with names over cups of tea and laughter: Danger Puss, Sam Osa, Tracey (like Madonna, or Cher), and finally Selma Puss. My friend quickly learned how to style wigs, and I traversed the internet for clothes (a skill nonetheless), recreating ourselves into the image of bona fide drag queens with capital Ds. We learned our craft and in jest competed for attention on social media.

I was influenced by a brilliant foray of artists that I was lucky enough to discover on social media. As a South Asian queen, I have only gratitude towards Asifa Lahore, notably the first out-and-proud Muslim drag queen in Britain at the time. Discovering her unlocked a world of possibilities for me. I realised that I didn’t just have to be a passive observer of the fascinating world of drag but that I could actively indulge in it. I had always been mesmerised by the displays of mujra performers, royal concubines in Mughal courts performing late night shows, through my heritage, but I’d also been conditioned by the decades of homophobia within the South Asian community to loathe it. However, I distinctly remember Asifa, wearing a glittering black and red sari, coupled with a gold embroider and gilded jewels, when she walked through the doors to the event organised by Club Kali: my jaw fell to the floor. Following this, I quickly discovered other brilliant South Asian drag artists, and notably, Mangho Lassi from Toronto, who influenced my own styling. 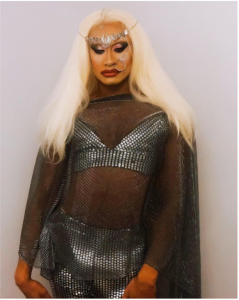 No amount of likes on Instagram, no amount of complements on nights out, and no amount of revellers aspiring to be photographed with us felt exhausting to me. I enjoyed the process and became one with the process. Never did it feel sinister but only childlike, and I experienced it as a release from personal battles I had endured. At that time, I lived with my parents in Kent, and my mother put on my wigs, in denial of the secret knowledge that I might be gay. I tolerated the ignorance just like the synthetic fibres of my wigs endured being dowsed into an entire town’s worth of hairspray. I looked conventionally beautiful in those wigs, discount dresses, and undersized platforms: majestic, Asiatic, bold. The children from the school in Kent, Southern England, where I worked as a teacher were emboldened by my carefree and confident stance. From behind the vapid veneer of creams, powders, and glue, I also relished the attention from big-shouldered, muscular gay men who might otherwise pass me by without a glance on the street or ignore me on Grindr. The validation furthered my love for drag, which I realised was a form of escapism for me, understanding that whilst it was not the antidote I had been searching for, it at least severed my relationship with self-pity and my perpetual state of melancholy. 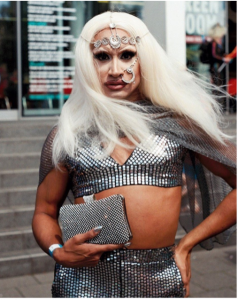 Following a few years of indulging the artform, I moved to the Northern hub, Manchester, England, also colloquially referred as ‘the gay Mecca’ by Southerners. The move promised not only dating prospects and endless indulgences in the infamous Gay Village, but also an opportunity to further my drag.

However, things quickly took a turn, following personal circumstances that led to me living with family, throwing myself and my drag back into the closet. Finally, to top it off, Covid-19 reared its head for the first time, and we are still reeling from the devastation. Being entrapped within a conservative Christian Asian home, I also battled off the sinister attempt from mother to change my sexuality. Things quickly spiralled, and my mental health nose-dived. I consider myself one of the lucky ones, having recently gained partial acceptance from my mother.

I escaped, living with a friend, and then I began flirting with the idea of drag again. Spurred on by the demand for South Asian drag and seeking to alleviate my mind from the weight of depression, I quickly pulled out the glittering attires that had been shoved away in the closet, to reinvent my drag. 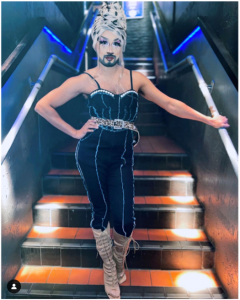 However, this time around, I wished to do things differently. I was now older. I was wiser. I had experienced hardships. And so, I wished the process of being ‘dragged-up’ to be onerous, hoping to enjoy the process as much as the outcome. I wished to upskill and not have to rely on stores to supply my closet. I wished to actively reflect my asianness, but also my western sensibilities. I also desired not to caricature the image of an ‘Asian aunty’, as I became enlightened to the often misogynistic leanings of drag. Whilst I believe that all types of drag are valid, drag as a caricature of female-bodies continues to pervade the western drag landscape. As a hairy South Asian man, I also wished to release myself from the pressure of shaving, only to appease the traditionalists, and wished to embrace this part of my biology that I was shamed of as a young teenager. I wished to adorn my asianness as a jewel rather than as a garish garb. Where before I had compartmentalised the different parts of my identity, I realised that I could merge all these identities into one exquisite mix. I realised that I no longer had to rely on splitting now that I had been brave and resilient enough to escape the trauma from years of overt and subversive homophobia. 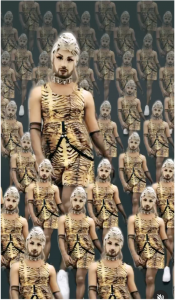 I also realised that drag and one’s racial identity, whether innocent or not, is often politicised on both ends of the spectrum: iconised by the marginalised as a symbol of strength, and weaponised by those seeking to attack the LGBTQ+ community. I now frequently encounter acquaintances who can apparently instantly recognise my turbaned drag amongst a sea of other gays during a night out. On the other hand, I later went on to discover how my frivolities were weaponised by gossiping aunts to taunt my mother; this caused a significant amount of hurt. Although this made me realise that whilst drag is now considered a mainstream artform in western media, the South Asian community still needs visible queerness.

All the challenges from the pandemic urged me to reconnect with all the things I enjoyed as a younger child and early adolescent, before I was conditioned to discard this pursuit for being too feminine. I have since taken classes in different forms of dance: street, jazz, contemporary, and modern heels. I have taken on sewing as a hobby. Reconnecting with my childhood has been deeply therapeutic and has helped me to unravel the damages of splitting. 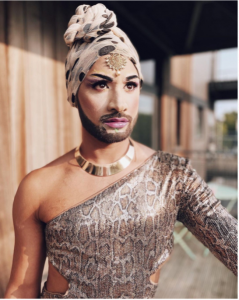 The more I continue to mature as a performer and as an artist, I realise that I crave the validation from the masses less and less, and I desire to simply use my drag as a platform to celebrate the heterogeneity of the South Asian diaspora. The most rewarding moments of going out in drag have been moments when I have been approached by the members of the POC LGBTQ+. I recall a Turkish woman who approached me, asking to photograph me, as she wished to capture the image of a South Asian man expressing their femininity. More recently, I was also approached at Manchester Pride 2021 by a young queer person with Caribbean heritage, who complimented my wearing of a turban and beard along with a Kim Kardashian-esque dress, wowed by the boldness of my asianness seeping out from every pore of my drag. Being recognised as a symbol of defiance, celebration, and boldness in any form is a huge privilege and drives me to create even more images that may inspire others.

In a post-splitting transition in my life, where I seek to portray my most authentic self, drag continues to be an important artform for me. Not only has it allowed me to explore different parts of my identity, learn different skills, but it has also provided a strong mask to put forward to the world – a glittering armour of humour and strength. However, the more I reconcile with my authentic self, I realise that the power that drag provides ultimately stems from within.

Selma Puss (Assad) is a British South-Asian drag artist, passionate about furthering South-Asian LGBTQ+ discourse through provocative, colourful displays in drag. Having been born in Bahawalpur, Pakistan, in an oppressed Christian community, and then raised in the south of England since the age of 10, Selma has a unique perspective on South-Asian marginalisation. Additionally, a full-time English Teacher in Manchester, England, with a fierce pursuit to educate and empower the youth.