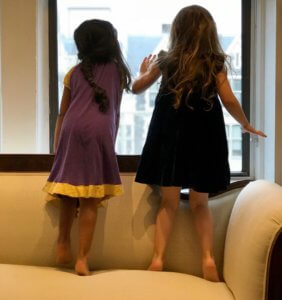 My four and half-year-old daughter recently started attending summer camp in New York City where we live. In the afternoons, I wait in line to sign her out, and thoughts creep into my mind. I imagine the families separated by this administration. I imagine myself in their places, being separated, being brought to a border facility and caged not knowing where my daughter was and if I would ever see her again. What if we were kept apart as a punishment simply for existing? What if my family was considered a crime? “Illegal”? Then my beautiful daughter runs out and hugs me. I am so lucky.

On the bus, on the way to run an errand, I imagine an ICE agent boarding and saying, “Any illegal aliens need to come with me NOW!” I imagine standing to say, “Yes, right here. I was born here but my great-grandparents were not. Is there a cage for someone like me too?”  Then I begin to fight with my “family” in my head. I put the word family in quotes because I no longer feel connected to most of them. I know many of them voted for Trump and have said things like, “‘Those’ immigrants steal jobs;” “‘They’ live like animals and should be deported.” These mental arguments exhaust me. The arguments I had with my family in person are largely the reasons why I choose not to be in contact with them anymore.

In 2003, ICE (U.S. Immigration and Customs Enforcement) was created along with the Patriot Act as another strategy in the war of terror. Replacing the INS (Immigration and Naturalization Service), which had some degree of oversight insofar as it was required to answer to the Department of Justice, ICE was designed precisely to allow our government to act extra-judicially. ICE makes its own laws, which has become all too evident in the recent mass jailing, prosecution, and extraordinary treatment of babies and children considered to be “illegal.”

This is ironic because, essentially, ICE allows our government to act illegally, but the issue of legality has never mattered much for those of us with white skin. In this country, white folks have weaponized race from the start. Thus, ICE gave further legitimacy to this administrations’ campaign to criminalize undocumented immigrants in the US.  Referred to pejoratively as “illegal aliens,” undocumented immigrants came to the US without legal permission or have overstayed their visas. In most cases, such people are fleeing violence and poverty in their home countries but have been denied asylum either overtly or as common practice. They have undertaken a harrowing journey risking everything for a chance at a better life or even just to survive. Most of us could never even fathom what it would take to make such a courageous journey.

America has always exploited vulnerable people until they were deemed no longer necessary. Whole populations were discarded at the whim of white Americans who felt it was their right to do so. The mass incarceration and disenfranchisement of black people in the U.S. is the most devastating poignant example of this (we must never forget that millions of black children are also in cages today). Our immigration policies and consequent bans are blatantly racist as they focus on people whose nationalities (such as Mexicans, Latinex and Middle Eastern) and/or religion (Muslim) threaten the concept of who an American is supposed to be (white and Christian). Fear and ignorance drive the “they vs. us” mentality, turning the fears of the “silent majority” into law.

Who is the silent majority anyway? Simply put, they are white people. Trump voters have often been assumed to be lower-class, uneducated whites; however, middle-class and wealthy whites embraced the “Make America Great Again” slogan too. White liberals can cry until the cows come home and say that we are not the “silent majority,” but Trump winning was a painful reality check for all of us. Our complacency brought us to this despairing point in history. We see now that so many of us thought that simply saying “I am anti-racist, open-minded and welcoming of new cultures” was enough. We now know that those words don’t count for much at all. Action is what matters.

All of this leads me to the point of the matter. A few weeks ago my best friend made the decision to “move” to Canada. But they didn’t really move; they essentially self-deported. There simply was no safe avenue to citizenship for them in the US, but through Canada, there was a chance. By the grace of Canada, my friend and her beautiful, breathtaking family were finally, after three years of waiting, given the chance for freedom! This is surely a great opportunity for her, and she will say as much, but her plan was never to go there. She did not want to go because America is her home.

Being South Asian, and having grown up in New York City, you would never have known my best friend was “illegal.” I knew my friend and her family had sought asylum in Canada; she had entrusted me with her truth. They had almost given up hope until, one day, the good news came, “We’re in!” she said, her voice a mix of elation and anguish. We both cried. Freedom had come to her but at the expense of everything she had built here. To have this new freedom, she would have to leave her life and possibly never (or at least not for 10 years as the law currently stands) return: Freedom! Freedom?

The day I met my best friend, we were at the playground with our very young daughters. The girls hit it off and we hit it off, but it was so much more than that. Our connection felt like fate, like some kind of good fortune from the universe when we both (read: exhausted new moms) really needed it. So, when I recently learned she was moving, I thought a lot about what I might be able to do to help. I offered ideas, and we both thought about her new life and, eventually, decided that I would drive her to the border. This could prove to be helpful in several ways. Logistically, I would be another driver, which is always helpful on a multi-day journey. Emotionally, I would be able to support my friend through this fraught event. Politically, if it came down to it, perhaps I would serve as a buffer should some danger arise. Perhaps my whiteness could be a shield.

Originally, I was going to drive her over the border itself and accompany everyone through customs, but later we decided that I’d fly back beforehand. My friend would instead be accompanied by her brother, already a Canadian, having undergone a similar “relocation” 10 years prior. I could fancy myself a helper, thinking maybe my whiteness could keep us from being pulled over by some foolhardy border patrol officer. More than that, I just wanted to be with my friend and help her start her new life surrounded by love and support. I wanted to spend as much time as possible with a loved one who was leaving.

Now she is there, in her new home in Canada. She and her family are building a new life, and I am here without her. I endlessly think to myself, how can I do more for her and people going through what she went through? Calling and writing to our government is monumental. Donating and spending (and withholding) money is critical. Attending marches and spreading the word in order to hold people publicly accountable is crucial. Showing up in the lives of those affected is the most paramount action of all, but often this the most elusive form of activism. I don’t have the answers, but I know if we all think hard every day about how showing up might work, we might just be able to get through this despairing time together.