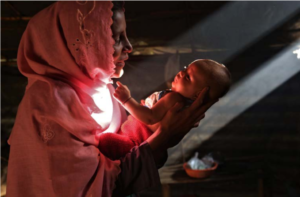 A Rohingya mother with her two-month-old daughter in their tent. Photo: Farzana Hossen/Oxfam.Link:www.oxfamamerica.org/static/media/files/bp-one-year-on-rohingya-refugee-women-girls-110918-en.pdf

Violence is an underlying feature among all societies.[1] To that end, whether it is in the form of cultural norms or legislation, the way society handles and resolves cases of violence is important because it reflects the values a society upholds. Though some societies may be more successful in addressing other forms of violence, gender-based violence is often overlooked despite being equally as important as the others. Gender-based violence, or “violence which embodies the power imbalances inherent in patriarchal society,”[2] ranges from mental abuse, rape, to exploitation of refugees. “Though it is not necessarily carried out by men against women, this is overwhelmingly the form it takes.”[3]Excluding data that are not recorded, between 10 and 80 percent of violence against women worldwide takes place in the home, ironically making the home one of the most dangerous places for women.[4] The percentage of violence further increases in situations of war and crises where women refugees are more vulnerable to violence as social control loosens. Rohingya refugees have been affected by gender-based violence through the acts of brutality committed by the Burmese military and by Rohingya men themselves. This in turn also creates an overgeneralization of all Rohingya women as helpless victims, which is only half the picture.

The Rohingyas are a minority Muslim group from a part of Rakhine state in Burma/Myanmar that has faced extreme persecution from the Burmese military. In recent years, the international community has increasingly paid attention to the crisis of what has become known as a “textbook definition of ethnic cleansing.”[5] Although the Rohingya Muslim population has lived in Burma for thousands of years, ethnic tensions arose in the course of British rule later exacerbated by increasing nationalist-Buddhist extremism. Additionally, when Burma declared independence in 1948, the Rohingyas were not allowed to partake in the negotiations and were later denied citizenship by the Burma Citizenship Law in 1982.[6] The denial of their citizenships has given the Rohingyas “stateless” status in which they suffer multiple human rights violations such as “restrictions on movement, forced labor, confiscation of property, forced eviction from, and demolition of houses, discriminatory taxation, and limitations on marriage, employment, health care, and education.”[7]

On top of all the human rights violations, Rohingya women experience discrimination in manners that are specific to their identities. For example, the “two-child rule” was enacted to limit the Muslim population for years by controlling how a woman should reproduce.[8] Physical and sexual violence against many of the Rohingya women are also not new to the problem but have increased tremendously over the past years. One recent example took place in February of 2013 when Burmese officials repeatedly raped thirteen Rohingya women and girls in a small village.[9] Even the process of escaping Burma is dangerous, as most of the women are also unprotected when it comes to fleeing the country, as human trafficking and smugglers are common, which in turn, also inhibits the ability of the victims to speak out.

That being said, the ethnic conflict and discrimination have forced many to seek refuge outside of Burma, in places such as Thailand, Malaysia and in particular, Bangladesh. According to the United Nations High Commissioner for Refugees (UNHCR) in 2010, about 2 million Rohingyas resided in Bangladesh and from that, about 28,000 lived in two official refugee camps while the rest were scattered across the country.[10] Despite moving countries, both refugee men and women do not escape from discrimination in Bangladesh, and Rohingya women continue to experience discrimination from their own communities as well.

Violence Within the Community

Rohingya women face emotional and physical problems in their own homes, as it seems their increased economic roles have also led to more domestic violence. Shamina Akhter, a gender specialist, and Kyoko Kusakabe, a professor of Gender and Development Studies, found that on top of the hardships refugee women endured under the Burmese military, they were, and still are, extremely vulnerable in their own communities.[11] As a result of their study among documented Rohingya refugees living in the Kutupalong camp, located in the Cox’s Bazar district of Bangladesh, they realized that the new power structure in refugee camps perpetuates women’s vulnerability to violence as women are forced to step out of their traditional roles. This is due to women adapting to new social duties as the “breadwinners” of their families, unlike the traditional role of tending to the household. Other studies have shown that “there is a direct correlation between domestic violence and changes in men’s income-generating activities in refugee communities” because “negative changes in men’s lives, such as unemployment and alcoholism, have a much stronger negative impact on women as they increase the women’s economic burden.”[12]

Many examples are seen in Akhter and Kusakabe’s study, including one where they interviewed a couple about their marriage, the changes that have occurred, and how that has affected them. The wife, Tohura, is a 38-year-old woman who is a domestic worker and has become the main breadwinner of the family. Despite this, she expressed her concerns by saying,

“My husband cannot tolerate it if household chores are not finished before he comes home. It is very difficult for me to manage all the activities. My husband sometimes cannot go outside for work, those days his temper is worse. I don’t want to give him the money I earn from hard labour because I know that sometimes he uses that money to drink alcohol with a group of men from the refugee camp. I cannot stop my husband because if I try to stop him, he threatens me that he will get another woman. So, I remain silent.” [13]

The concern Tohura has is very different from that of her husband, Mohammad Raque, who is a 46-year old man working as a rickshaw puller. He depicts his side of the story by commenting,

“I cannot go outside for work every day. It is shameful for me as a man. I do some household work for my children when my wife is not at home. But due to work outside home, my wife also sometimes treats me wrong. She is earning, but I’m the head of the household. She should listen to me always because she is my wife. She does not want to listen to me as she did earlier, and I do not like that.”

This concept of some men wanting to control the income of the family, while also asserting dominance as head of the household raises a bigger question of what masculinity and femininity in the Rohingya society is, and how that changes during a crisis.

Akhter and Kusakabe also found that women and men experience violence differently. Their findings show Rohingya men are physically abused by local men in Bangladesh who see them as intruders, verbally abused by employers, and discriminated against by the police as well. It is important to be also aware that men also faced sexual violence, and solely focusing on acts against women would not be complete. Furthermore, it is often that “recognition of men’s experience of violence is important since it affects women’s experience of violence through domestic violence.”[14]The frustration and failure the men faced outside their homes are often taken out on their wives and children. Additionally, with women, domestic violence gets more complicated because of the stigma of it being a “private matter” that hinders them from opening up and discussing the cruelty.[15] In particular, it is hard for women to address these problems because of the community power structure of the camp officials. Camp officials, Mahjees, are highly respected community leaders that are mainly males in support of traditional gender roles, and they often have the power to make final verdicts on problems.[16] When it is already difficult for a woman to come to terms with violence committed against her, it would be even more problematic to be vulnerable in front of someone she does not trust.

In addition to existing internal issues, the community power structure of the camps addresses another complex issue of power and the ways in which the women in refugee camps are being helped by external groups of people. Humanitarian and aid programmes in refugee camps tend to emphasize cultural specificity where there is a need to be sensitive to the cultures and traditions of the refugees.[17] It appears as though this belief reinforces who and what gets power in a community. If the Mahjees have always been community leaders, and the goal is to preserve all types of tradition, it also implies that the same powerful men with conservative views about gender roles will constantly be the ones making decisions. Thus, the “question that needs asking is – who is making that culture? Who is invoking that tradition?”[18]for the answers to those questions will foreshadow the type of future that Rohingya women and children might have. If not, the by-product of those humanitarian aids might just be that “when women are helped in ways that reinforce an oppressive status quo, the only people helped are the powerful males of the group.”[19] That being said, the complex results of external aid display how important it is to first understand the vast cultural and historical differences among ethnic communities. Understanding the history of women and gender, especially in South Asia, is critical for comprehending the situation faced by some Rohingya women. If those factors are not considered, it would be the same as ignoring all the complexities of an entire history and society, and then acquire at the end only half the picture. Likewise, different societies may require different ways to approach gender-based violence.

Above all, as important as it is to be aware about gender-based violence among Rohingya women, it is also essential not to categorize all of them into a group that endures gender-based violence for that would dismiss their individuality as subjects. In the many writings that describe Rohingya women as unable to advocate for themselves in front of the Burmese military, it seems as though all Rohingya women are constructed as the “victim.”[20]  Their identities are often collapsed into a homogeneous big group of helplessness. Though it is easy to categorize all the women in one group because, with their children, they “make up 80 percent of the forcibly displaced,”[21] homogenization of an ethnic group, especially by an external group, must be avoided as it only intensifies the loss of individualization. In the midst of everything, it is important to “recognize that women continue to demonstrate degrees of resistance,”[22] and this needs to be depicted in order to obtain a more complete picture. When many Rohingya women are already gaining more economic roles in the community, their stories should also be considered and told as “it is important to recognize their capacity to act as the protagonists of their own story” and their immense potential to serve as “agents of constructive change within their families, communities, and nation.”[23]

Jenny Lalneipar Vung is a student at Furman University studying History with a concentration on South Asia.

[11] Shamima, and Kusakabe, Gender Based Violence.