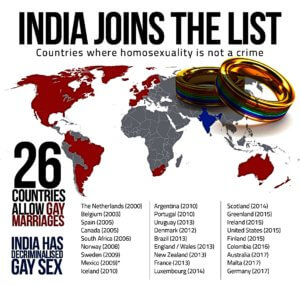 Gay sex is now legal in India, the largest democracy in the world with a population of 1.3 billion. While there is no official number (or a way to calculate) of how many lesbian, gay, bisexual, trans or queer (LGBTQ) people there are in the world, it is commonly said that 5-10% of the population of a country can belong to the LGBTQ community. The judges delivering the verdict in India accepted that number to be about 8% of the population –  a whopping 104 million people – who can now engage in consensual same-sex activity in private and will no longer be considered a criminal worthy of 10-years of imprisonment. This large population was killed, violated, persecuted, discriminated against, and was simply denied basic human rights for 160 years based on what they do within the four walls of their privacy. Let that sink in for a moment!

In delivering the verdict against the Indian Penal Code (IPC) 377 that criminalized ‘sex against the order of nature’ on September 06,Justice Indu Malhotra, one of the5judges of the Indian supreme court,aptly said: “History owes an apology to the members of this community and their families … for the ignominy and ostracism that they have suffered through the centuries. The members of this community were compelled to live a life full of fear of reprisal and persecution.” What a watershed moment in the history! Kudos to India for finally righting the wrong and joining the league of 125 extraordinary nations where homosexuality is legal. But what about the other 72 countries that still criminalize LGBTQ people? Or what about India’s neighbors like Bangladesh, Pakistan, Sri Lanka, or Myanmar that has similar laws also inherited from the British? What impact would this ruling have in these countries? Can the LGBTQ community of these countries also hope for a better future now?

To find an answer to that question, we need to first look at the LGBTQ movement in India and how it survived (and in recent years thrived) because of an increasingly visible, brave and assertive queer community. Despite the anti-LGBT laws and conservative social norms, queer people in India started to build pockets of resistance mostly in the urban areas since the early 90s. When Kolkata held its first Rainbow Pride Walk in 1999 (also the first in South Asia), police did not crack down on the crowd, neither did the State put a ban on subsequent parades. No machete-wielding extremists followed them home to chop them into pieces. Queers were able to practice their democratic right of demonstration. Soon almost all the major cities in India started to have their own pride parades. Just a few days ago, Delhi had its annual queer pride, which was the first (and the largest till date) after the 377 verdicts. From over a hundred participants wearing masks to hide their identities in its first year in 2008 to more than 5,000 people from all walks of life identifying with their sexual orientations and genders as they marched in central Delhi in 2018, the pride parade has come a long way in just ten years.

Visibility was at the core of the LGBTQ movement in India. There were queer people everywhere – on the streets, on TV, in Bollywood, on newspapers, in families. Hundreds of organizations, platforms, informal groups, and online listserves opened up. Queer people came out in public, to their families, at workplaces, at schools. Academics, scholars, and journalists wrote extensively on the topic. Authors, writers, poets, artists, directors, and producers all came together to create space for the queer creative minds. HIV/AIDS provided much-needed resources and policy shift. Mainstream feminist movement brought forward the critical and intersectional lens to the issue. Bollywood celebrities publicly endorsed the cause helping to ignite a debate and change hearts and minds. Business tycoons and corporate entities came forward to cash on the pink money. But most importantly, the grassroots activists and the next-door-queers worked tirelessly to occupy spaces and amplify the voices of the most marginalized.

But of course, the visibility came with its own price. The queer community has been fighting against persecution, discrimination, and violence for a long time. There have been a number of cases under section 377. There are numerous reports on police violence and custodial torture. Many organizations, especially the ones providing health service to queer people, faced police arrests, state surveillance and legal harassment. There are documented cases of suicides caused by stigma and bullying. And of course, the right-wing religious groups have always been the strongest opponents of the queer community. In fact, it was because of the petitions filed by religious fundamentalists that the pro-LGBT verdict by Delhi High Court in 2009 was overturned by the Supreme Court in 2013. However, the LGBTQ movement persisted with even more urgency and assertive visibility.

What enabled the movement to not only sustain but also grow can be a Ph.D. thesis in itself. Needless to say, it is the unwavering resilience of queer individuals, but it will be half the picture if we don’t also acknowledge the socio-political situation that at least allowed such visibility. A fair and independent electoral process, an independent judiciary, a relatively free press, and an army that has stayed away from politics have set India apart in the developing world. No matter how some of these institutions are now allegedly crumbling under the right-wing BJP government, the opposition and the civil society still hold a considerable amount of space. Dissent is not only possible but also vigorously practiced.

Despite some controversies facing the Supreme Court in recent times, the judges have been able to deliver landmark judgments with profound implications for the Indian society. In 2018 alone, the Court delivered some judgments that were extremely politically and socially delicate and required a level of wisdom, courage, and independence that is very rare in the subcontinent. From Aadhar to Sabarimala to adultery, this Supreme Court has set India on the right track of a modern state. But perhaps no other judgments had as much importance as the judgment on the right to privacy had for the Indian LGBTQ community. In August 2017, a nine-member bench declared that every Indian should enjoy a fundamental right to privacy that it is intrinsic to life and liberty guaranteed by Article 21 of the Indian constitution. The LGBTQ community sensed a strong sense of victory since the judgment clearly mentioned ‘sexual orientation’ as a core aspect of privacy. It would have been difficult for the following judges to uphold the constitutionality of Section 377 after this verdict. To think that such progressive judgments can be given during a right-wing Hindutva (Hindu nationalist) government, which has been trying to strengthen its hold on the democratic institutions, one must acknowledge and appreciate the level of judiciary independence still present in India.

The judiciary has been able to feel the pulse of the Indian society, which has been undergoing rapid transformation led by a relatively younger population belonging to an aspiring and expanding middle-class. This modern, tech-savvy, and educated bunch has been able to set aside religious dogma and envision a pluralistic society. Aided by the press and the media, this generation has also been able to influence the corporate world, which is increasingly becoming pro-LGBT. Right after the 377 verdicts, a number of leading brands and companies launched unprecedented campaigns declaring their solidarity and support. Of course one can criticize this as pink-washing and homo-capitalism, but if that means a less homophobic and more equal work environment for a queer person, then so be it.

The result of the decriminalization of homosexuality in India has started to be visible. Many heartwarming and inspiring stories of the impact of 377 verdicts are emerging from various corners of India, including the rural areas. Stories are also coming from Singapore, Sri Lanka, Guyana, Kenya, and other countries where activists are revitalized and empowered by the Indian example. Of course, the ripples are also felt in the neighboring countries. The mainstream media in Bangladesh widely covered the news of decriminalization. The jubilation was no less among the activists in Pakistan and Myanmar. But the euphoria does not take time to subside when reminded of the bleak picture of LGBTQ rights in those countries.

Among all the countries in South Asia, the LGBTQ movement in Bangladesh probably had the most potential after Nepal and India. In a survey conducted within the LGBTQ community in Bangladesh in 2014, almost 70% of the respondents said religion and law were the biggest obstacles in gaining the rights and equality for LGBTQ people. Law actually ranked higher than the religion, which meant that the community was more worried about the State than the religious extremists. If the same survey were done now after the killings of 2016, probably the answer would be different. However, the main argument remains the same that there should be a clear separation between the mosque and the State for any progressive civil rights to gain foothold in the country. This is where there is a stark difference between India and Bangladesh.

Moreover, the civil society space in Bangladesh has been shrinking at an alarming rate in recent years. The authoritarian government has been mercilessly cracking down on any dissent under the pretext of national security and anti-terrorism measures. But then the government is seen to shamelessly (and albeit dangerously) appease the very fundamentalists it claims to fight against. Draconian laws are being passed to control the media and the Internet, which is the last bastion of freedom of expression and speech. The LGBTQ community is finding it extremely difficult to even breathe let alone maneuver.

The LGBTQ movement in any country does not operate in a vacuum. Just like any other civil rights movement, it is affected by the overall socio-political situation of a country. For the India 377 verdict to have any impact in Bangladesh or other neighboring countries, the democratic institutions must be respected and upheld to a certain extent. The LGBTQ community and the other movements must realize that they are in it together and work for hand in hand to ensure that there is an enabling environment for a thriving pluralist, democratic society. And it begins with the right to dissent, the most fundamental right of all.

Reputed to be one of the first publicly out gay men in Bangladesh, Shakhawat Hossain Rajeeb has been a gay rights activist for the last 15 years. He takes a deep interest in the norm-critical and intersectional approach to gender, sexuality, and bodily rights for a just and equitable society. Rajeeb continues to fight for LGBTQ rights even after being exiled due to threats and persecution.

Shakhawat Hossain Rajeeb is a gay rights activist who has worked with Boys of Bangladesh for 13 years before being forced to exile to Sweden, where he currently works with RFSL, the national Swedish LGBTIQ organization.