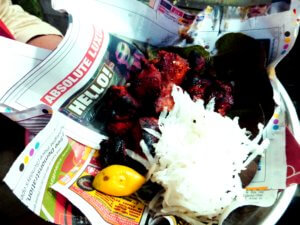 My cousin and I were on our way back from a shop where we had been sent by my mother to buy minced meat, when we made an impromptu and unconsidered decision to stop at our local video store on Napean Sea Road to borrow a film. As we browsed the shelves of video cassettes, I became aware of red splatter on the polished white tiles of the store. Not having much of a screen, I said loudly, at the very moment it occurred to me, “Eew, blood”! As the frowning, and very vegetarian, Gujarati video store owners considered their reaction to our dripping packet of rapidly defrosting meat, my cousin, seven years older and wiser, apologizing profusely, whisked me out of the store. Today, almost 30 years later, she has not forgiven me for the embarrassment I caused her!

This was circa 1990, I was in my teens, the minced meat was buffalo meat, and we lived in Bombay which was still not Mumbai.[1] I did not visit that video store for several months after that. Yet what is remarkable is that my reason for not visiting the store was deep embarrassment rather than fear. In contemporary India, walking into a store with a bag of beef with my cousin (who is not really my cousin, and also a Muslim) would fill me with fear. In India today, people get lynched for far less. According to the website India Spend, of the 60 incidents of cow related violence from 2010-2017, 84% of those killed have been Muslim, and 97% of these incidents occurred after 2014 when the right-wing Bharatiya Janata Party (BJP) formed the national government in India.[2] These statistics suggest that those responsible for this violence were emboldened by the election of the BJP, a political party affiliated with Hindu nationalism, a Hindu majoritarian movement that eschews India’s plural past, operationalizing particular understandings of Hinduism to construct Hindu unity and political allegiance amongst diverse groups of Hindus in India and abroad.

That day in the 1990s, I was embarrassed because I had accidentally offended the sensibilities of people who were strict vegetarians by dirtying their store with my dripping packet of meat. Mary Douglas famously defined dirt as “matter out of place.” As Douglas eloquently notes, “Where there is dirt there is a system. Dirt is the by-product of a systematic ordering and classification of matter, in so far as ordering involves rejecting inappropriate elements” (2002:44). For the store owners, bovine blood in their pristine store was certainly “matter out of place” for both aesthetic and religious reasons. Importantly, it was to me too, not for religious reasons, but most definitely for aesthetic and pluralist ones. In my own beef eating home I was not only raised to respect other people’s traditions, but also to be mindful of littering and dirtying my environs- at home and elsewhere. Indeed, for both of us, the bovine blood in the store was “matter out of place,” dirt.

However, unlike for the store owners, for me beef dripping in a store may have been “matter out of place,” but beef on my plate was not. Eating beef was as normal for my teenage self as munching on gathiya may have been for the Gujarati video store owners.[3] Indeed, beef was served for dinner almost every day. If my father was home, there was always meat for dinner. We almost never ate mutton or chicken unless there was a dinner party, though we were sometimes served fish which I never ate. My father loved his beef. But that was not the only reason why beef was eaten so often in our house.  Although we may have lived in a company flat in posh south Bombay, our family was not wealthy, and beef was the cheapest meat on the market. Even today, beef is the cheapest source of animal protein available in India – a plate of chicken or mutton biryani is double the price of a plate of beef biryani. To ban beef is to ensure that many Indians, especially the poor, have even less access to animal protein.

According to a recent study, it is likely that only 20% of Indians are vegetarian, and in some states like Kerala, vegetarians account for only 5% of the population (Natrajan and Jacob 2018). While the National Sample Survey Office data indicate that only 7.5% of Indians eat beef, Balmurli Natrajan and Suraj Jacob argue that this is an underestimation, resulting in part from the cultural politics around beef consumption and the fears associated with such an admission (2018). Interestingly, an earlier study claims that bovine meat is second only to fish in terms of production and consumption in India, and most of the animals consumed are male calves and bulls (Chigateri 2008: 17).  Despite these revealing statistics in a country where Hindus constitute 80.5% of the population, many would assert that Hindus do not eat beef. Which Hindus? And why not?

Certainly, many Hindus, particularly those belonging to upper caste groups, venerate the cow asgau mata, as mother and goddess. Many of these Hindus do not eat beef even if sourced from male animals, extending the sacredness of the cow not only to her male progeny, but also to buffalos.[4] While today, many Hindus do not eat beef for these reasons, not all Hindus worship the cow, and historically eating beef was not always taboo. Scholars have argued that beef was eaten in Vedic India (Doniger 2009:112, 149-150; Thapar 2004:115). Indeed, the strictures against beef eating may have been rooted in historical claims to status and superiority. Romila Thapar notes that while beef was eaten in ancient India, particularly in ritual contexts and to honor guests and high status individuals, “eventually it became a matter of status to refrain from eating beef and the prohibition was strengthened by various religious sanctions. Significantly, the prohibition was sanctioned among the upper castes” (2004: 115).

Although there are, and always have been, many Hindus and Hinduisms in India, upper caste Hindu ideologies have become increasingly hegemonic in modern India, and indeed in understandings of India and Hinduism abroad. In an insightful article, Shraddha Chigateri shows how the hegemonic positioning of dominant Hindu caste ideologies about food renders the eating habits of many, including some Hindus, problematic, illegal, and/or deserving of violence (2008:15). These ideologies position vegetarianism as superior to non-vegetarianism, and non-beef eaters as superior to beef eaters. As Chigateri notes, it is the ideologies of dominant Hindu castes that naturalize this “food hierarchy” in India and position beef-eaters as problematic relative to others (19). It is critical to note here that it is not only upper caste Hindus, but also those located in certain regions (inevitably in the North) who unequally structure conceptions of Hindus and Hinduisms in the country. In his passionate statement that underscores the tremendous pluralism within Hindu traditions, Ramachandra Aluri, an associate editor of the Malayali daily Matrubhoomi who describes himself as a “devout Malayali Hindu” points out that many Hindus in Kerala eat beef and asserts, “We Hindus of Kerala don’t worship cows as mothers. You will rather find bulls in Shiva temples here as stars.”[5] We need to pay more attention to the many voices of Hindus and Hinduisms as Vasudha Narayanan urges us to do, and be mindful of who gets to speak for Hindu traditions (2000:768).

Those who sanctimoniously claim that Hindus do not eat beef have clearly never met my family of beef eaters from Kerala. They would not understand how this family was raised and nurtured by a vegetarian mother who, ironically, was the only family member who participated in a “Not in My Name” protest against the cow-related lynchings of Muslims and Dalits in India, in Kochi in July 2017. Or perhaps they would claim we are not properly Hindu? After several years of undergraduate and graduate education in the United States where I was made to feel like an alien by Hindus from the northern and western parts of India who dominate the diaspora, I recall curiously asking my father whether he believed in god as we circumambulated the shrine of the Vadakkunnathan Temple in Thrissur (which we did on every visit home ostensibly for divine blessings but really for their divine appams).[6] He looked alarmed as he held on to his white mundu with one hand and exclaimed rather loudly, “Of course yes! Don’t be such a bloody fool!!”[7] As my sister and I dissolved into uncontrollable giggles at my father’s somewhat predictable response in this ancient holy place, we were still given a lesson on the different ways of being Hindu in contemporary India.

Those who argue for a ban on bovine slaughter, have also not spent much time considering the livelihood issues implicated in such laws. What do farmers, already dying because of crippling debt in India, do with older cattle that are no longer economically viable? Sagari Ramdas writes, “beef is a byproduct of dairying and draft” animals raised for the dairy industry or for work on farms, but then sold as meat or leather when they become unproductive.[8] What about the various actors in the meat industry in a country that remains the third largest beef exporter in the world according to a 2017 FAO report?[9] In her recent book on Qureshi butchers of Delhi, Zarin Ahmad asserts that while such livelihood issues have been raised in court cases in postcolonial India, they have been dismissed by court judgements. She notes, “Questions regarding the Fundamental Rights versus the Directive Principles;[10] labour concerns in a labour surplus economy, economic viability of maintaining unproductive animals are issues that continue to be debated but not sorted” (2018: 19). Often reduced to a communal issue, what is really at stake here is a livelihood issue that crosses religious lines.

Why have I chosen to ruminate on beef in what, at best, might be dismissed as navel gazing and, at worst, might draw the ire of the countless right-wing trolls who police what can and cannot be said about contemporary India? At the risk of being accused of moralizing, I write because I think it is important that we beef eaters, who cannot possibly be all Christian and Muslim in a country that is 80.5% Hindu, stand up to the right-wing vigilantes, lynchers, and trolls. Otherwise we will be complicit in enabling an India in which bovine rights are more important than human ones, and where Hindu majoritarianism belligerently obliterates the plural traditions of Indians and Hindus.

[1] In 1995, Bombay was officially renamed Mumbai, a change that indexed the increasing grasp of a violent ethno-religious nationalism on the culture and politics of the city (see Hansen 2001).

[3] Gathiya is a fried snack made of gram flour.

[4] Zarin Ahmad has a useful discussion of the different classifications of bovine meat (2018:8).

[6] The appams (neyyappams) at the Vadakkunathan Temple are deep fried sweets made of rice flour, jaggery, ghee, and other ingredients.

[7] A munduis a garment worn by many men in Kerala. It is worn around the waist, like a lungi or sarong, and required for men to enter certain temples in the state.

[10] Ahmad notes that after much debate in postcolonial India, the issue of cow slaughter was included under the Directive Principles of State Policy rather than enshrined as a Fundamental Right in the Indian Constitution (2018:18).

Kalyani Devaki Menon is an associate professor in the Department of Religious Studies at DePaul University, Chicago.