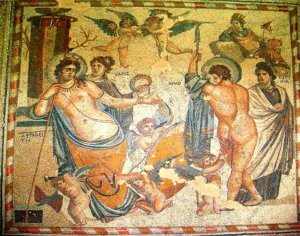 First, let me explain to you the literal meaning of this word: Ghouta. Ghouta in Arabic language means a low-lying place, full of plants and rivers. It is one of the most fertile areas on earth. The soil there produces all kinds of fruits: apricots, peaches, cherries, nuts, corn, grapes. All of them have a unique and special flavor, tasty, juicy and delicious. Due to the beauty of its nature and its vegetation richness, the ancients regarded Ghouta as one of the seven miracles of the world. The wonderfulness of Ghouta’s spring is one of the myths that are alive around the whole country till today. Its refreshing air is legendary, if you never had an occasion to feel it, you cannot imagine how refreshing it is.

What happened in Ghouta and what we have just seen and heard today during the event is a big lesson to our humanity. I’m convinced that suffering of one nation somewhere, is always suffering of the whole humankind and all humanity. If we allow suffering to happen to people of whatever nation, then what is the fate of our planet?

I do not know who I exactly am. I was given the name Kholoud Charaf, which means ‘ the honour of eternity’. I was born here, on Earth, in a country called Syria, I come from a small southern town Al Suwayda. Coming here I left there, in Syria, all my family and friends, all the Syrian children and people who need help. I wish I could protect them and I will always keep them in my heart. My great hope is that mankind will live in peace and will stop playing this bad and violent game of war. I can’t imagine a man dares to kill his brother or sister. I don’t want this. I want to be a real and deep human being, living in a world, where we can stay faithful to our humanity.

The war forces you to live on a knife edge between life and death. But actually during the war you live as you were dead. Members of my family, my friends and me as a person, my childhood, my youth, my good memories, all these people and things died before my very eyes. What can I say? I can write about it from here, a safe place, but I think that in the face of the war it means nothing.

I come from Syria, I’m a Syrian woman. During the war I lost my faith but I tried to continue to live as a human being and protect my humanity. I was in deep isolation, and in a terrifying stage of my life. I worked in the prison and tried to give hope to prisoners, but I had no hope. My work with them was a test to my humanity. I have never been able to tolerate what man can do to each other.

Now I’m in Poland, in a safe country, but I still keep my people in my heart and what is more, I would love Polish and European people to keep them in their heart with me.

We, the Syrians, are people of ancient civilization, the first alphabet was discovered in Syria in Ugarit. My country always was (and still is) the place of a mixture of different cultures and civilizations – many of them do still exists. We are educated and broadminded people who still want to learn more and more, despite the narrowness of our situation. Syria is also a mosaic composed out of sixteen different religions, which never wanted to fight each other. What happened then to our country that now religion can be the boundary that separates us from each other?

When I came to Poland I quickly get used to the peace, my mind get accustomed to the silence and calmness. In Europe everything is different than in Syria: language, customs, nature, architecture, food, religion, even the way how people look here: everything here is different. After I arrived here, I started my second life, I wanted to build my mind like a completely new house. Then it turned out that I had been building this new house on the sand, not on the rock. After some time I had my first travel here, I travelled to Germany to visit my friends. And there, for the first time since I left Syria, I met Arab families. I heard the Arabic language and saw my people which have the same pain. They reminded me about my country, my pain there, the war and all bad things that my mind had been trying to escape from. Then the house that I built completely collapsed. I fainted and woke up after several hours in the hospital. And then I realized that I and we all need deep treatment.

We, the Syrian people, are brought up in the culture of fear. They teach us to feed the fear with our souls and we teach our children to fear. The fear is like a censorship, which is not only the matter of authorities but we have it inside us. In Syria even the birds are afraid to eat from your hand, here in Europe it is a usual thing.

In Al-Suwayda I met many women who told me about their injuries, they just started speaking, without me asking for this. The first explained to me how she felt, where an explosion occurred in her home area. She told me about the shrapnel that is still moving in her stomach and how her Sunni husband left her after 25 years of marriage and the only reason for him was that she is a Shiite. The second woman told me about her husband whom she had to leave dying under the ruins of their house after one of the bombings, because she had to run away with their two children. You cannot imagine how many stories like these two could be told by different people in our country. I can’t express how sorry I am for all the people from my country. We have to be aware that the war is nothing else than the end of us as humans. What is happening now in Syria and in all areas of war is the pain of the whole earth and a big threat to our humanity. We try to convey our pain to you, not to make you suffer, your suffer would harm us, but to show you how this pain hurts us. Please, do not forget about our pain when you leave this event and go home. The stories that have been told today are not fiction, they are not a film, these things are real, too real. We are trying to tell you that this pain of war is not necessary, we really don’t need to fight. Only love can be the mean to live as brotherly people. We all, regardless of nation, culture, religion or skin color, are afraid of hunger, of thirst, of deprivation, of loss, of death. We are afraid of the loss of the life we have always loved. We, the Syrians, are really similar to you, we have children, our homes, our trees, our memories, but we have lost all of these things. You think that we are still alive, newspapers often deal with us as if we were only numbers. But you must know that we really need you to become alive again. I am here among you now in a safe place, I left the children in Syria dying, please stop the killing.”

The speech above was given by Kholoud Charaf within the framework of the event „Ghuta. 7 minutes” which took place on 20th May 2018 in the Bunkier Sztuki Gallery in Krakow.

Kholoud Charaf is a Syrian poet, writer, activist, and member of PEN Germany. She has published four books, including the volume of poetry, "The Remains of the Butterfly,” about war and life in Syria. Her poems have been translated into ten languages. She has received scholarships as a writer from Poland, America, Latvia, Sweden, and Germany. Her autobiographical report "Journey of the Return to the Mountain” received the respected Moroccan Muhammad Ibn Battuta Award in 2019. She is working on a new novel.