When we first discussed this issue, there were powerful images in our minds about the role of public art in politics and social justice movements. One of these images was the painting of “Black Lives Matters” in 11-meter yellow capital letters on a two-block-long pedestrian section in Downtown Washington, D.C. near the White House. The plaza was renamed Black Lives Matter Plaza by Mayor Muriel Bowser on June 5, 2020, after a series of protests against the deadly violence brought upon George Floyd, protests that were taking place not only in D.C. but also across many cities in the world. We saw in this example not only the role of people using signs, symbols, and art to protest, but also the complicated dynamics between local political opinions and jurisdictions and big, federal government power. Similar displays across the world visually marked solidarity with politically and socially underrepresented groups. Another notable debate centered on monuments: whether the statue of Cecil Rhodes – the British diamond magnate, colonial politician, and white supremacist in South Africa – or U.S. Confederate Generals, such as Robert E. Lee, should be removed or protected, and whose history would be preserved by either choice. All of these deserve to be unpacked and analyzed. But in this editorial, we emphasize the potent role that visual art – especially public art that takes space in shared environments – has in stirring strong sentiments and motivating people to act in varied ways. Public art is a powerful tool, and it is regularly used by people across political spectrums all over the world.

Public art is one of the most democratic forms of art because it requires no payment to view, nor is it housed like trophies in galleries, homes, or museums. Instead, walls, bodies, urban streets, and natural landscapes are the canvas, while the artist uses their tools to add beauty, aspirations for community, or to communicate dissent, anti-capitalist views, and political or societal critiques.

Often inspired by the urban environment, public art is sometimes confrontational and vivid, other times symbolic and nuanced. Its use varies over time and place: it can mark territorial boundaries among gangs or be part of urban beautification projects. Occasionally, it is deemed illegal and as evidence of moral and societal decay. Viewed differently, it is a method of communication, of spreading political and social messages, of advocating for political parties or policies, of promoting equal rights for women and marginalized communities, and for educating about health and the importance of masks and vaccines during the COVID-19 pandemic.

Public art, in other words, does something. It is not meant to be viewed passively.

Shuddhashar is excited to present articles and photo essays about public art for its 27th issue. You will read articles about theatre and street performances, spoken word poetry, clothing, scroll paintings, historic statues (and their removals and absences), climate action art, and much more. Some of these articles are reflection pieces that consider the evolving role of public art in one’s personal life. Others describe a traditional art genre’s change over time, including changes from a form of beautification or religious expression to a medium for activism. Yet others examine political debates around public art. You will also find photo essays that tell stories of art as activism.

Our primary goal is to highlight public art as an important form of activism and critique about norms, policies, or systemic inequities. While Shuddhashar regularly emphasizes the importance of the written word to activate societal and personal transformations, visual and performative art has a unique role because of how it occupies space and time. In its public manifestation, art is experienced. It exposes everyday realities, sheds light on what is usually hidden, presents a complicating angle on an ordinary object or idea, or evokes emotions that can be directed toward political ends. It stirs feelings, often in complex ways.

We’re pleased with the diversity of topics represented in this issue. We note, however, that over half of those who originally planned to contribute had to withdraw, mostly due to the pandemic. We wish them good health and look forward to their contribution another time.

Without their contributions, some notable absences are felt in this issue, including those that consider art in support of Black Lives Matter or its resistors, such as Blue Lives Matter, All Lives Matter, and the various U.S. flags that have been created and/or flown to indicate opposing political positions, such as the confederate flag. We expected graffiti art as well as skateboard culture and tattoos to be central themes of some articles. We hoped to highlight the significant role that murals have played in numerous communities, including in Latin America.

An additional thought to consider: public art manifests on the body, and hair, clothing, body art (e.g., tattoos and piercings) become visual manifestations of one’s personal commentary or critique about societal norms. In other words, we embody our role in society each time we dress and walk out of our homes (or in front of Zoom).  Not everyone considers this “public art,” but undoubtedly some of us do. Some of our great writers consider these issues. We are conscious of the messages we communicate when we don a cloth, paint our face, exit a tattoo parlor, color our hair, comb or leave disheveled our hair, grow or shave our beards, and so on. Many of these acts involve decisions about how we want to exist in public – what symbolic message we want to convey by our bodies. But there are also absences. We encourage you to use your imagination to play with ideas for how we communicate our societal position and critiques with our very own bodies.

Public Art opens the door to countless fascinating and important topics. We hope you enjoy what’s included in this issue, and we hope the articles and art help you open more doors.

A final note: the art displayed with each article title are random and are not connected to the articles. 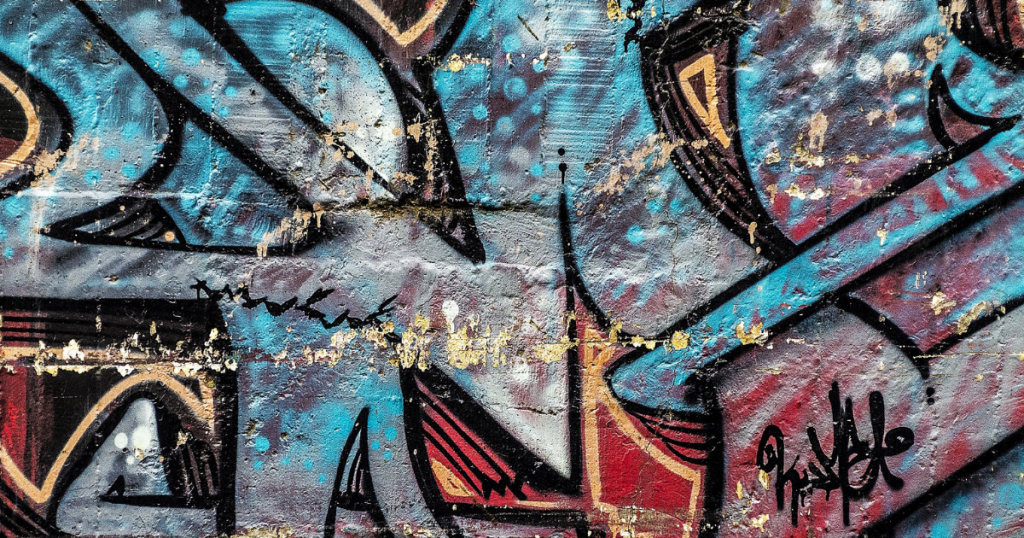 At the 2021 COP26 in Glasgow, Australia revealed itself once again as a climate action laggard – stubborn, arrogant, and willing to compromise the rigour of global climate agreements by refusing to sign up to ambitious carbon emission reductions. Australia is literally at the coalface of climate change: while its economy is still heavily reliant … 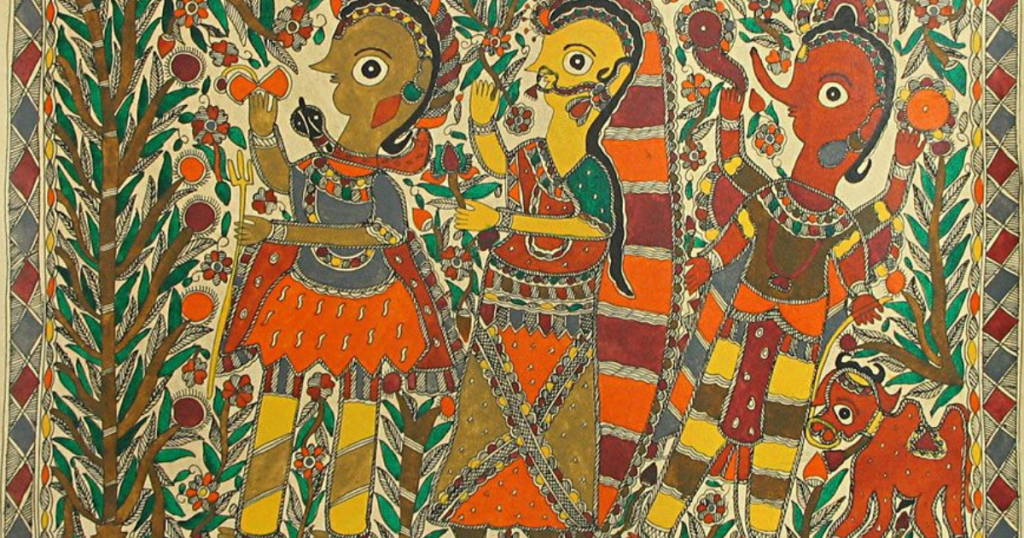 The Mithila region on the Nepal-India border in northern Bihar is best-known for its art tradition once solely the work of rural women who decorated their mud walls with images of their Hindu gods and goddesses to bring auspiciousness to their homes. Starting in the late 1960s, the Indian government began encouraging women to paint … 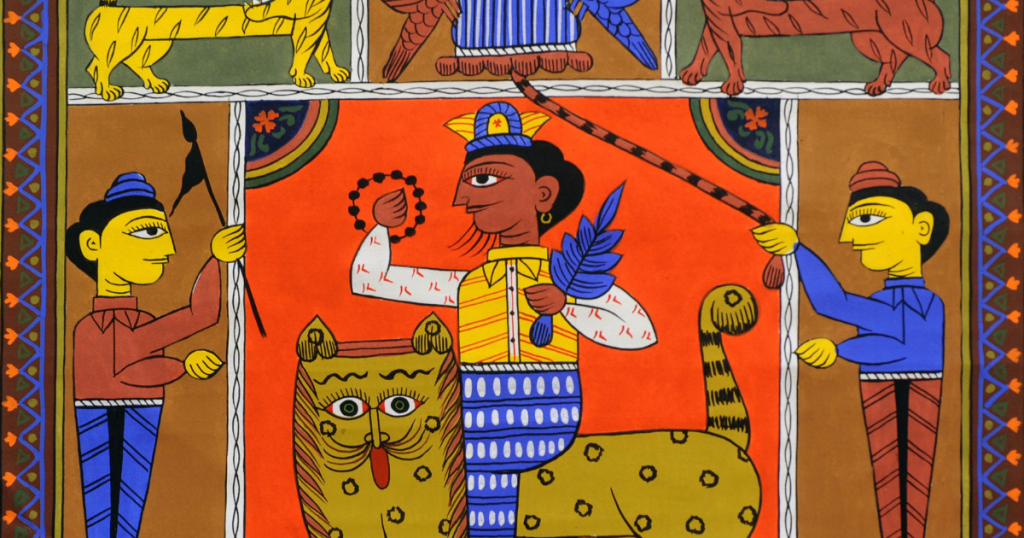 In the Indian state of West Bengal—and, to a lesser extent, the nation of Bangladesh—there exists a caste of formerly nomadic bards who also paint scrolls used to illustrate the songs they sing. Although their origins are somewhat obscure and hotly debated by scholars, one thing can be said for certain: They have always been … 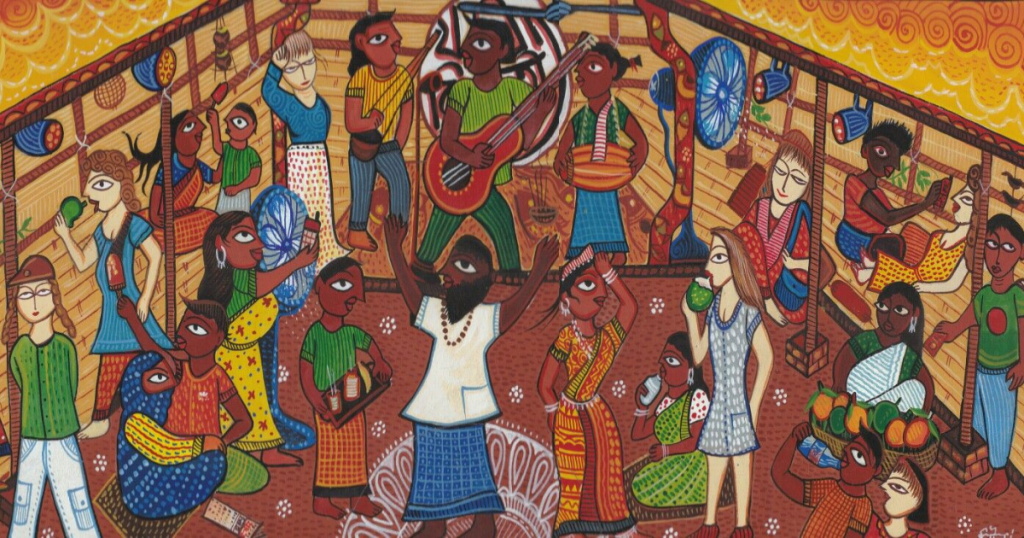 Jatra is a South Asian theatrical form that is not performed within closed walls but under the open sky and without a “third wall” as in the proscenium theatre.  The text of the jatra plays is called pala. Usually, the audience gathers around the stage on all sides, and they include people of all ages … 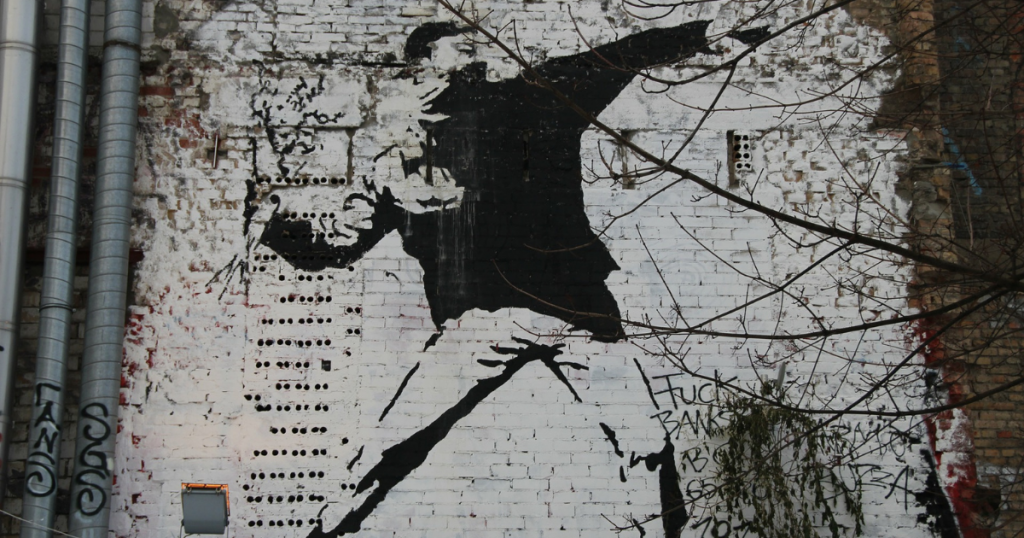 I remember the first time I transformed one of my poems into a spoken word piece. It was an evolutionary moment in my life. It was the summer of 2016 and one of my friends, and fellow activist, convinced me to get on stage at an open mic and perform one of my pieces of … 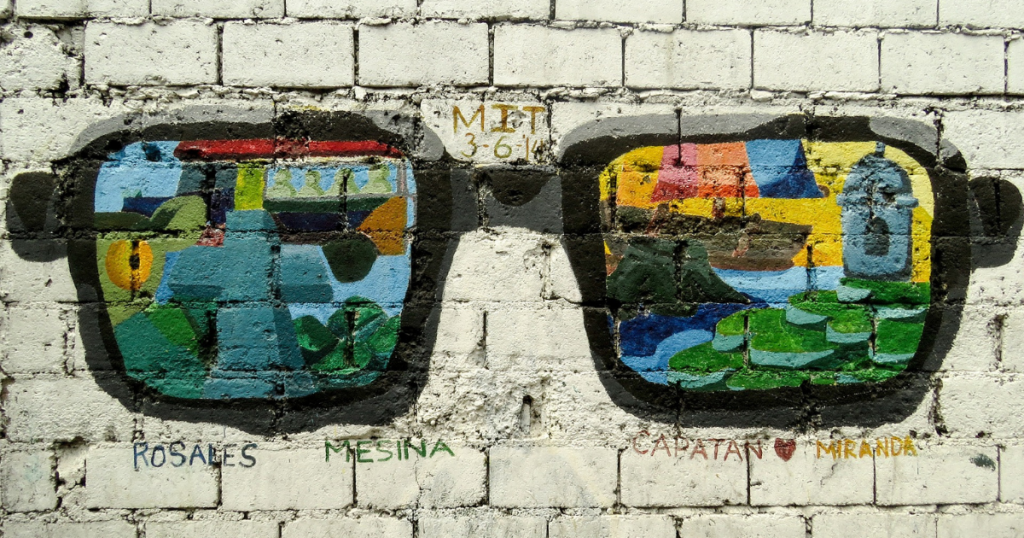 When the statue of the British colonialist and mining magnate, Cecil John Rhodes (1853-1902), created by Marion Walgate in 1934, was hauled away from its Cape Town public university site to an undisclosed location, it left a poignantly empty plinth behind. This disruptive act, which turned into a political watershed, followed a durational performance art …

After the Fall: An Art of the Commons  Read More » 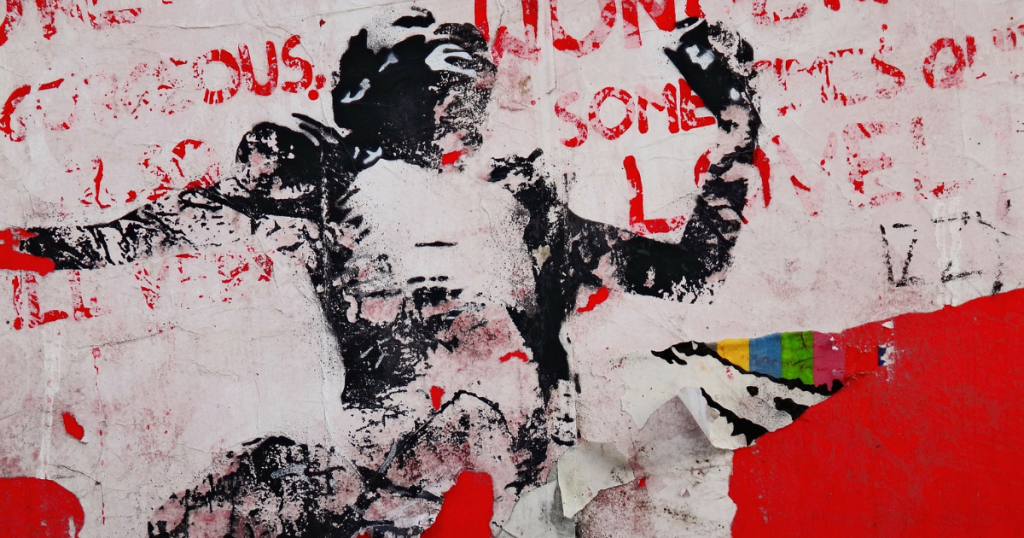 What I like about street art are the stories it tells. They inform, educate, inspire, and uplift. They interject and connect. They render the invisible, visible, and make the ugly, apparent. They reinterpret, decenter and protest. They appeal to the unknowable. I’m not an artist, an art critic, or even a visual anthropologist, but reading … 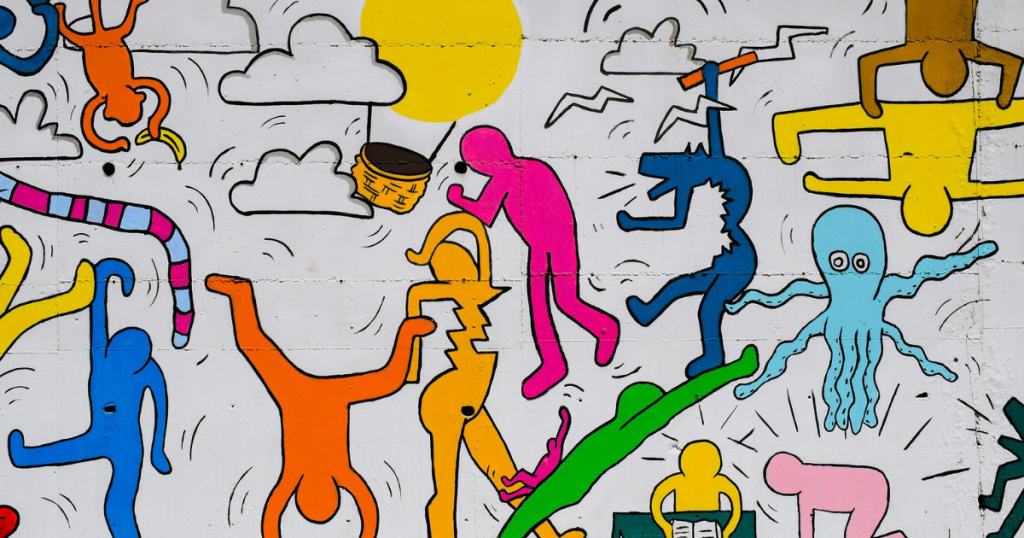 Having found myself in a pit of depression in summer 2021, with the weight of three lockdowns, two tumultuous years as a professional in the education sector, and a fractured relationship with family, I began introspecting the crevasses of my mind, desperately seeking an antidote to the maladies of my mind. Engrossed in books, hoping … 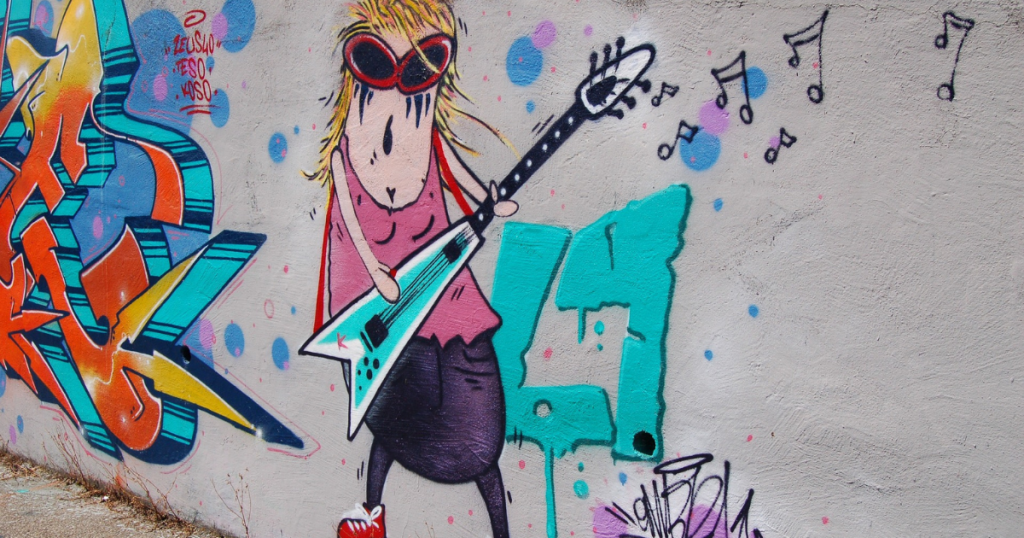 Public art has a vital and moving, though at times paradoxical, role. It reflects the circumstances and truth of the moment or era in which it exists. Undeniably, this art form can enchant its audience by reflecting a never-to-be-forgotten past, or it may alert its audience to the present, allowing viewers to recognize themselves and … 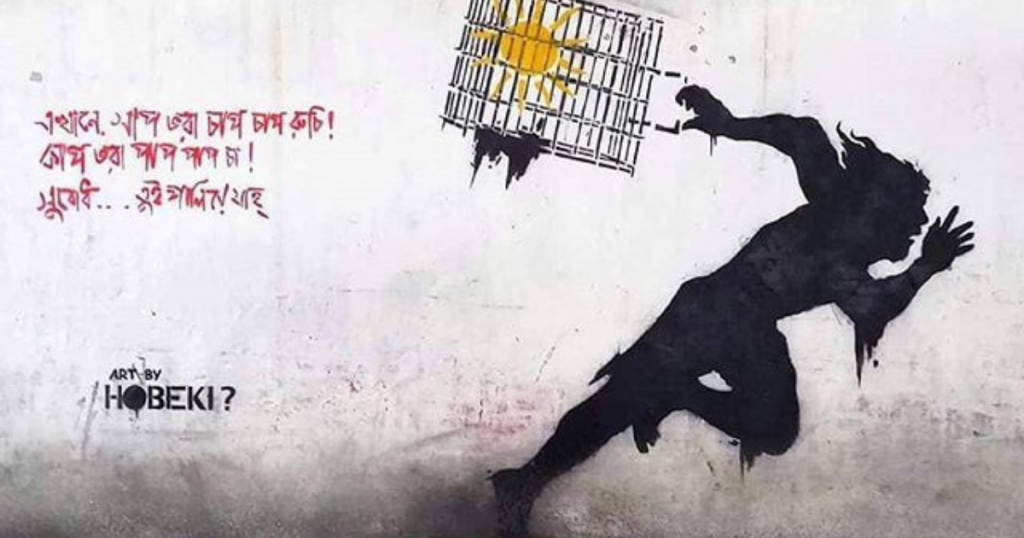 Street life is art. Our intertwined ways of being intersect as we move through our communities, cities and regions. Everyday movement through public space creates a complex network as people walk and roll, traveling and interacting with different destinations and intentions, in close proximity to one another and yet without, most of the time, collisions … 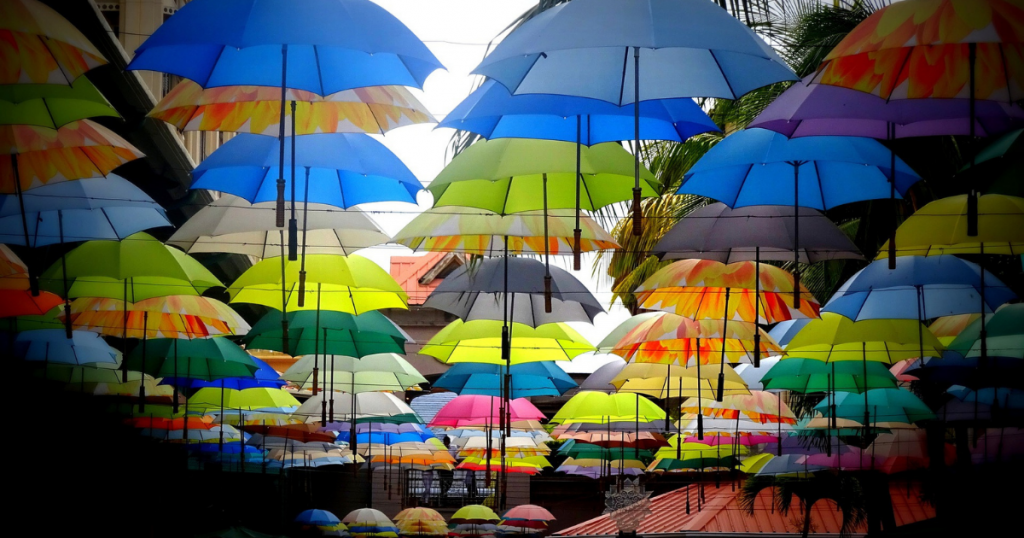 The Art of Pride Flags and Individual Identity Read More »