Cultural genocide has existed for as long as there have been wars and battles between different groups of people, as one group seeks to dominate a territory or people. But the fact that it continues today is alarming. Why, after seeing the horrors of the Holocaust, do people still manage to justify the extermination of another group, their identity, and way of life? How have we unlearned our historical lessons?  In the intervening years since World War II, have we forgotten our common humanity?

Yet today, as nationalisms grow in the guise of protecting a nation against some presumed “threat” – whether from an enemy inside or outside their borders – we are witnessing increased hatred and attempts to expel and destroy others. Even neo-Nazis are on the rise in Europe and the US today, despite the strongest international condemnation of genocide and a moral reckoning about global responsibilities following the atrocities of World War II. Equally disturbing are the systematic attacks of groups of people, leading to record numbers of refugees as people flee persecution and war.

A bleak as this picture looks, humans have developed many additional tools to exterminate people and their identities through cultural genocide. Whereas mass extermination and gruesome mutilation attract international scrutiny, the insidious elimination of cultural traditions, knowledge, languages, and material culture draws far less attention. This also isn’t a new phenomenon, although our methods continue to evolve with new technologies. We rewrite histories to categorize certain peoples as outsiders or as enemies. We block Internet access and create false narratives about people as terrorists. We fortify walls. We insist that the only way to be a patriot is to abandon anything that marks one as different. We prohibit the use of foreign or indigenous languages in the guise of integration. We ban textbooks that do not fit with new hegemonic narratives. We destroy places of worship, statues, and relics as well as indigenous languages along with their speakers, traditions, and artifacts. We eliminate the practices and livelihoods of many cultural minority groups within our borders and neighborhoods.

How and why should we care about these intangible genocides? Compared to gruesome horrors of death, these acts appear less malign. However, the willful destruction of tangible and intangible aspects of culture is just as devastating in both the short and long term. Moreover, a particularly disturbing method of cultural genocide involves violation of women – as bounties of war, or as victims of rape. Does this receive the same degree of international condemnation as the deaths that result from persecution and war? Why not? It’s also worth remembering that women – as mothers, grandmothers, sisters, and daughters – are traditionally the preservers of culture. What happens to a culture when women are destroyed in such ways?

Destroying cultures, traditions, and languages is a certain way to ensure that a particular group’s way of life is forever altered or eliminated. Even if people survive, their cultural knowledge and identities do not. The consequences of this eradication are immense. Less diversity, less creative potential to solve global problems, and less resilience are but a few of the long-term impacts. No one is spared when those losses are counted.

The eradication of cultural diversity is often justified by invoking the rhetoric of economic development or the doctrine of “one nation, one people, one culture”. The former, for example, is manifested in the state-sanctioned expropriation of indigenous-owned lands in South Asia by mining companies. It is also seen in the decimation of land owned by indigenous groups in western Amazon due to encroaching oil lots seeking to meet the increasing demands of companies and consumers. The latter justification is reflected in the forceful indoctrination of the Uyghur minorities in Xinjiang to Chinese communist ideology. The latter is also evidenced in Bangladesh when secularists, LGBT+ activists, and minorities were brutally targeted by radical Islamists with impunity and likely with a complicit state. It is also seen in India, where Muslim minorities are categorized as outsiders and enemies, despite being Indian for generations, and persecuted and killed in the name of protecting a Hindu India.

As a systemic attack on a group of people, its culture and identity, cultural genocide is a crime against diversity, pluralism, and tolerance. Shuddhashar’s issue on Cultural Genocide focuses on why and how such practice continues in myriad forms, who benefits from it, how to prevent the loss of culture, and why this should be alarming to all of us.

With this issue, we hope to turn our readers’ attention to the importance of preserving cultural diversity. Just as there is a need to preserve natural diversity, there is a parallel need to protect cultural diversity. A culturally diverse world makes our lives meaningful. This argument does not endorse cultural relativism or require us to conclude that all cultural practices are humane and equal. Instead, the emphasis is on upholding the core human rights related to language, culture, and tradition. It our duty to fight any attempts at violating these rights, and we should all be alarmed at the widespread acts of cultural genocide around the world today. We must, therefore, defend people’s rights to live, talk, practice, and look differently – for the good of us all. 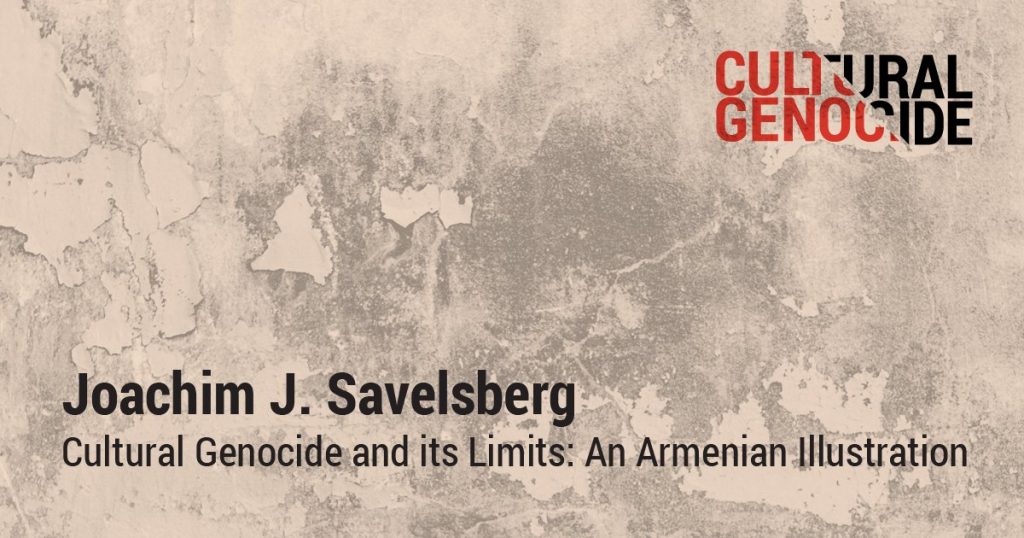 We attribute distinct moral and legal judgments when individuals die due to homicide rather than from “natural causes,” and when genocide rather than natural catastrophes extinguishes a people. The same applies when cultures die, material culture such as buildings or works of art, or immaterial culture, such as languages or other symbol systems that provide …

Cultural Genocide and its Limits: An Armenian Illustration Read More » 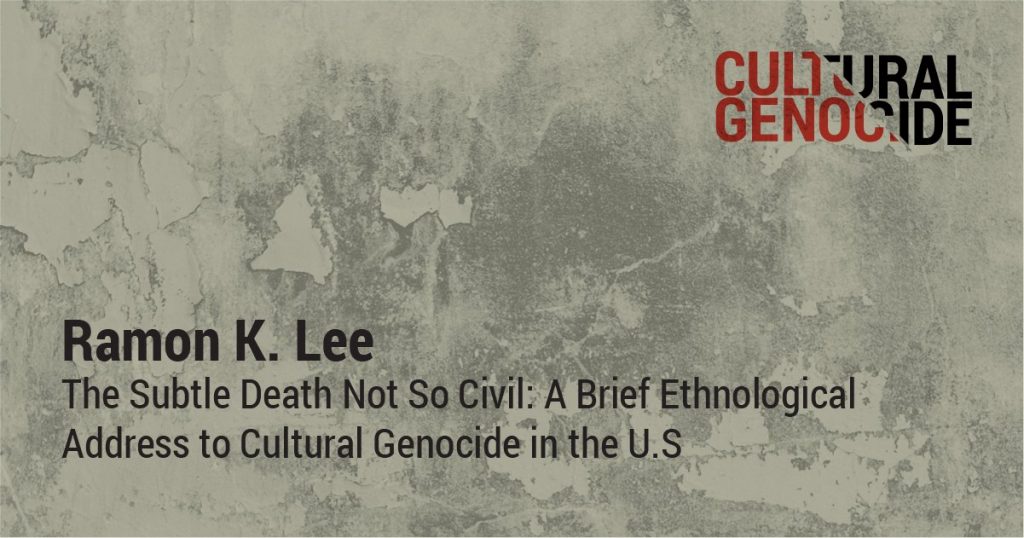 Achille Mbembe (2003) affords us the beautiful construction of necropolitics, a term meant to describe the power to decide who lives and dies. I offer an expansion of the term to suggest that the term also represents the power to decide how death comes and to what degrees or in what ways it shifts, reflects, …

The Subtle Death Not So Civil: A Brief Ethnological Address to Cultural Genocide in the U.S. Read More » 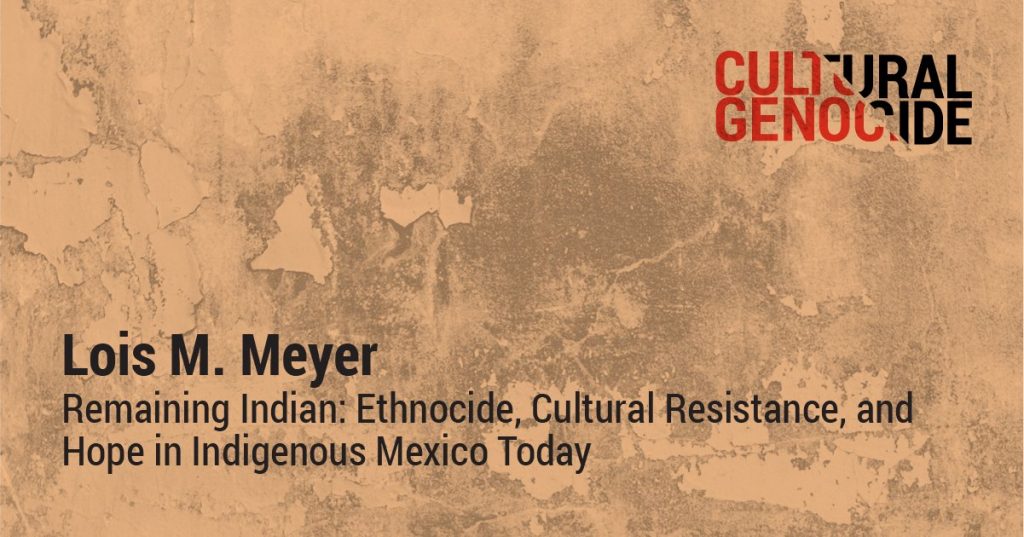 The harm that has been wreaked upon countless millions of people around the world by “modernization” and “development” has yet to be fully documented and digested.  From desertification and deforestation, through pollution and intoxication, to pauperization, marginalization, social polarization and dependency, the effects of so-called maldevelopment or perverse development probably add up to one of … 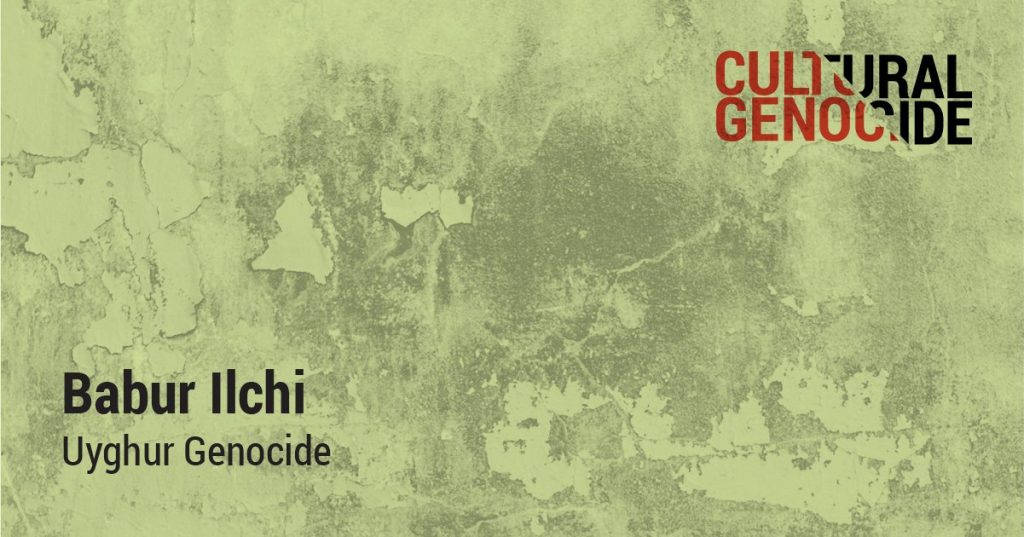 “There is no such thing as cultural genocide.” A phrase said a hundred times in a hundred different ways to dismiss the pain of an entire people desperately holding on to what they have as the rest is taken from them. When the dust settles, what we’ve grabbed on for dear life turns to dust, … 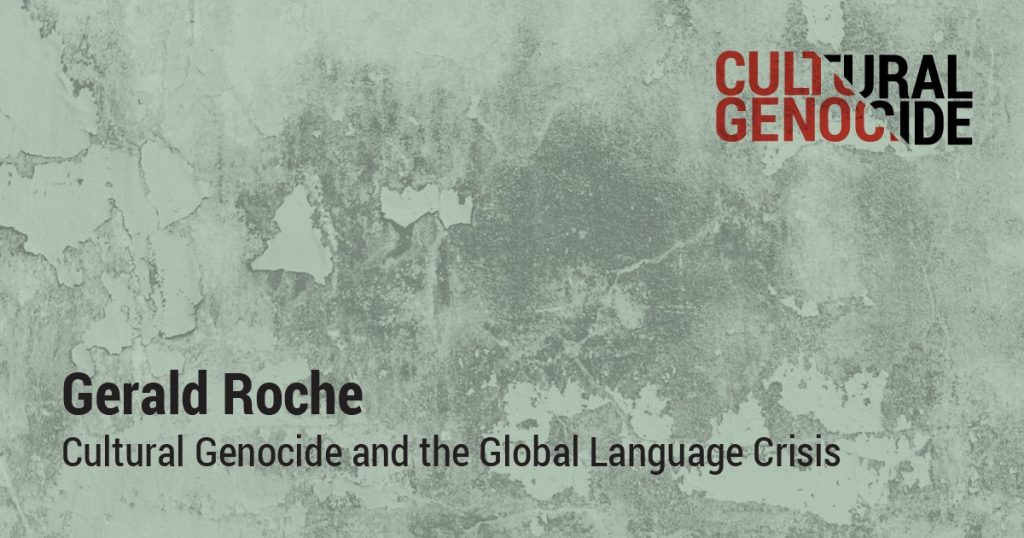 “Be outraged at language oppression and its effects and speak out.” Alice Taff, Melvatha Chee, Jaeci Hall, Millie Yéi Dulitseen Hall, Kawenniyóhstha Nicole Martin, and Annie Johnston (2018) We live in a moment of crisis for the world’s languages. In almost every country on earth, people who sign and speak Indigenous and minoritized languages are … 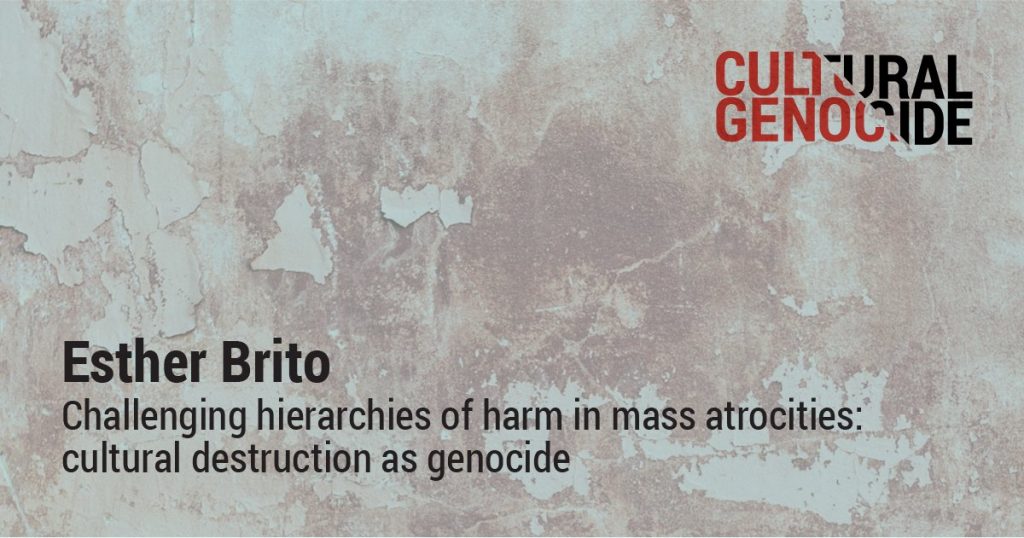 Introduction The world we live in today is one of increasingly visible social, political, and economic fracturing. From this uncertainty, we see a return to the politics of fear, manifesting in the rise of nationalism and authoritarianism across every region. Narratives of cultural war and dehumanization are permeating daily conversations in ways that drive increased … 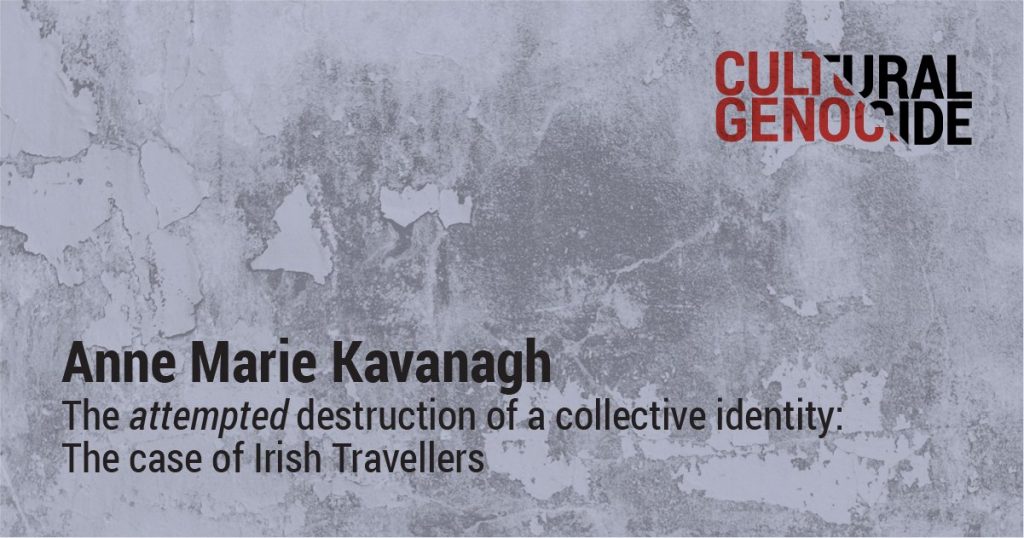 Introduction Cultural genocide is a contemporary as much as a historical occurrence (Kingston, 2015) enacted through “a coordinated plan of different actions aiming at the destruction of essential foundations of the life of national groups” (Lemkin, 1943 as cited in Powell, 2007, p. 534). This article examines the case of Irish Travellers, a nomadic ethnic …

The attempted destruction of a collective identity: The case of Irish Travellers Read More » 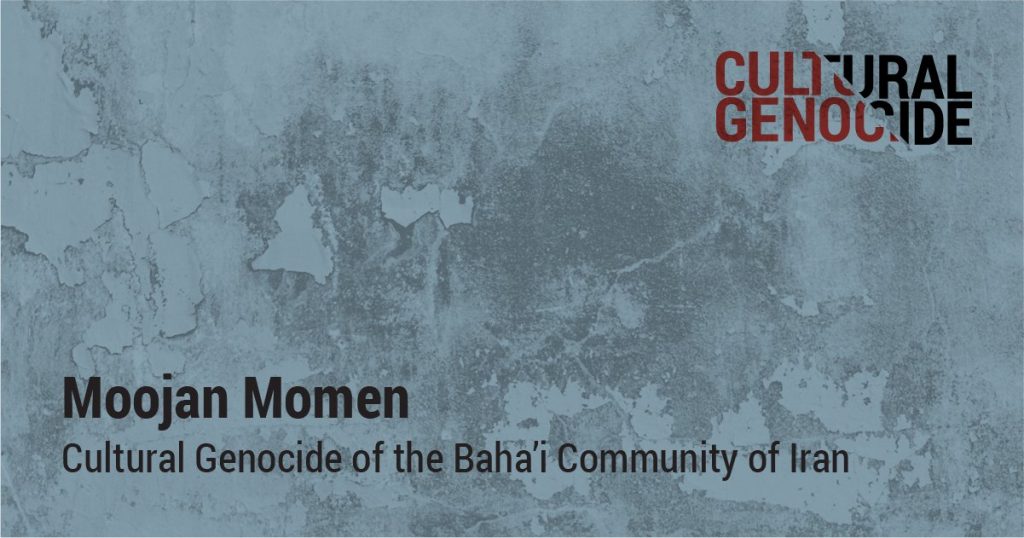 Imagine, if you will, being a minority in a country that is being subjected to relentless brutalization by a tyrannical, totalitarian government. In this country, the media is controlled by the government and produces a never-ending stream of articles, newspaper reports, and programmes that call you traitors to your country and accuse you of conspiring …

Cultural Genocide of the Baha’i Community of Iran Read More » 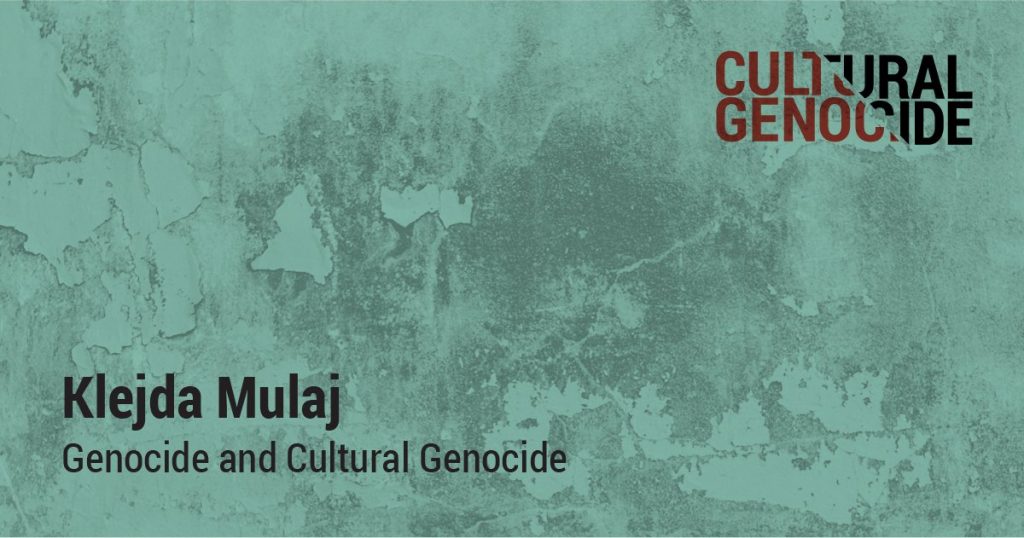 The study of genocide has become a regular feature of higher education in many parts of the world. Moreover, the discourse on genocide has permeated policy dialogues in various fora of the United Nations and other international governmental and non-governmental organizations, human rights networks, and civil society platforms. The wide cascading of genocide discourse, however, … 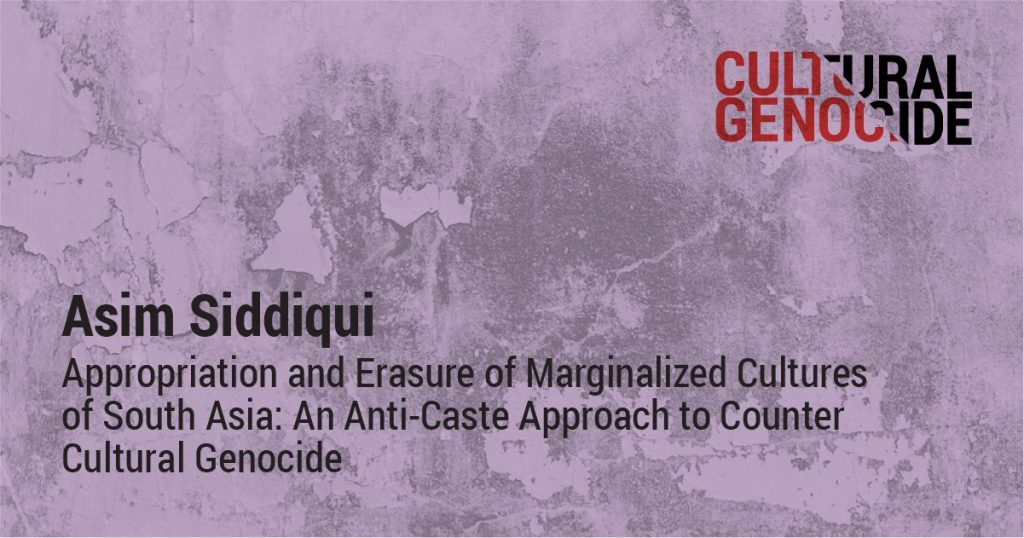 When we speak of cultural appropriation and cultural genocide, the predominant image that comes to our mind is that of colonization by Western Europeans appropriating or erasing Indigenous traditions or African and Black cultures, as well as colonized Asian cultures. In the postcolonial context, the erstwhile colonized countries tend to unidirectionally focus on the global … 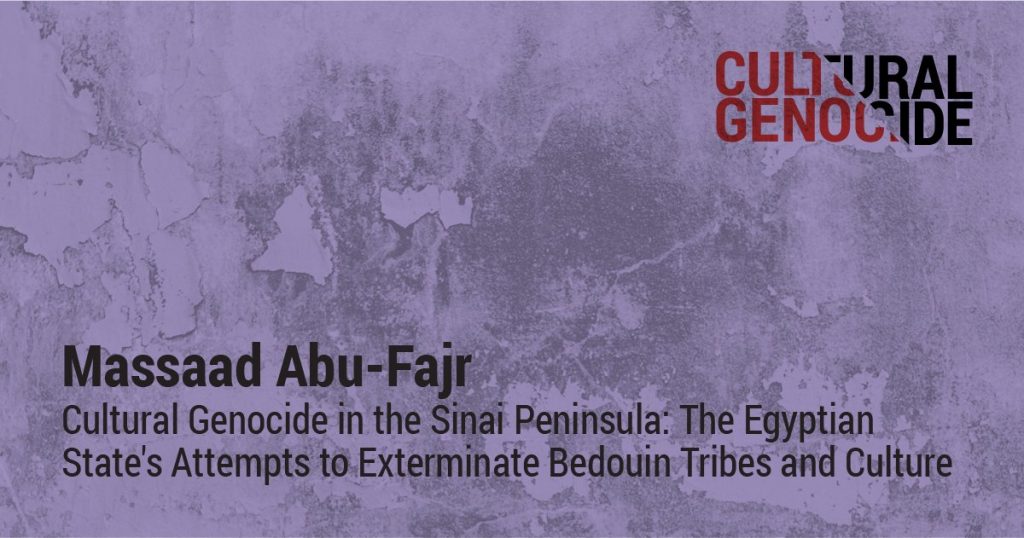 “The United States of America pays 50 million dollars annually to support development in the Sinai Peninsula,” a diplomat at the American Embassy in Cairo told me during a small tea party that the embassy held in my honor to celebrate my release from prison in August 2010. I told him that this was the …