Perilously close to rising sea levels and vulnerable to floods, erosion, and cyclones, Bangladesh is one of the top recipients of development aid earmarked for adaptation to climate change. The common reading of Bangladesh as a victim of climate change assumes that as global warming increases, ice caps will melt, sea levels will rise, low-lying Bangladesh will drown, and people will flee because of floods and increasingly frequent natural disasters (such as cyclones and tidal surges), thus in turn becoming climate change refugees. While simplified narratives may help make development interventions seem related to climate change adaptation or resilience in order to attract aid funding, does it accurately capture the causality of floods in complex coastal landscapes? Might it even risk exacerbating environmental degradation and increasing coastal vulnerability to climatic change? These are issues that I tackle in my book Misreading the Bengal Delta: Climate Change, Development and Livelihoods in Coastal Bangladesh (2021, University of Washington Post), which the rest of this article will draw on.

Despite well-meaning intentions, the way the Western press uses images like the one in Figure 1 conflate beneficial monsoon floods with sea-level rise, portraying floods as being caused solely by climate change. The narrative that floods result in climate refugees ignores the fact that there are three types of floods in Bangladesh: borsha (annual monsoon rains), bonna (irregular destructive floods in the wake of cyclones, tidal surges, and storms), and jalabaddho (waterlogging, drainage congestion). In a natural environment without any artificial infrastructure, the borsha rainwater merges with the silt-laden river water to deposit silt on the floodplains. The silt raises the land levels and promotes processes of organic decomposition that make the deltaic lands fertile. These inundated wetlands are the breeding grounds for hundreds of spawning fish species and help irrigate aman dhan (rice planted during monsoon season). In view of this, the narrative that all floods must be prevented is highly problematic.

For instance, permanent flood-protection embankments obstruct the process of monsoon borsha flooding. The construction of these embankments in coastal Bangladesh during the 1960s prevented the 1.5 billion tons of sediment that pass through the Bengal delta each year from depositing on the floodplains during the monsoon. Instead, the silt clogs up the rivers and raises the riverbed levels outside the embanked floodplain (Brammer 2014; Hossain et al. 1987). This difference in elevation traps the heavy monsoon rainwater inside the embankment, as it can no longer drain out to the rivers. The ensuing congestion leads the water to stagnate and ruins crops in the type of flood referred to as jalabaddho (Iqbal 2010). Figure 1 is a typical image of jalabaddho during the monsoon, when water is unable to drain out through an embankment and back into the river—this is known as waterlogging or drainage congestion. Thus, the complexity of the local ecology and the distinctions between borsha, bonna, and jalabaddho floods are lost in portrayals of Bangladesh as a climate change victim.

Nevertheless, the World Bank is spending US$400 million on a project to build wider and higher flood-protection embankments based on a project rationale that this constitutes climate change adaptation. The logic is that (1) sea levels will rise and cyclones will increase in frequency and intensity; (2) this will lead to devastating floods and salinity in Bangladesh; and (3) the best way to protect Bangladesh is to build larger embankments (World Bank 2012). By rearranging events to alter expectations of causality, the World Bank is in effect reinforcing a climate reductive narrative as it does not engage with past experiences of how flood-protection embankments worsen siltation and exacerbate damaging bonna and jalabaddho floods. Most importantly, Bangladesh is located in the largest delta in the world, formed by the Ganges, Brahmaputra, and Meghna rivers. This is a hydrologically active delta with meandering rivers that continuously reshape the land, through both erosion and sedimentation. Silt in these waters have the ability to raise existing land levels and can change whole waterscapes and ecologies. In the unembanked Sundarbans mangrove forests, the flooding of silted river water raises land levels each year, keeping pace with sea level rise (Auerbach et al. 2015).This silted delta has an innate ability to adapt to a certain amount of sea-level rise caused by global warming. The hydrological characteristics of this delta complicate narratives of Bangladesh’s vulnerability to rising sea levels, where a misreading of the coastal landscape, such as viewing embankments as “flood-protection” infrastructure against rising sea levels, diverts attention away from environmental processes that compromise Bangladesh’s ability to withstand future climatic risks.

In the autumn of 2011, I was finishing twelve months of qualitative research on an internationally funded water governance project in Bangladesh’s coastal zone. My field trips drew my attention to several urgent problems that our rural interlocutors had raised: from monoculture—such as saline tiger-prawn cultivation that weakened flood-protection embankments and destroyed the soil—to canals, which filled up with heavy sediment each year. The goal of that project, however, was to assess the operation and maintenance of the embankments and their sluice gates. I therefore had to exclude many of my findings about the contentiousness of infrastructure and land-use practices. I sought to explore these issues further in a new project and began asking fellow researchers I met during the year, how to best pursue this. When I mentioned my interest in land use and siltation to a fellow researcher as we sat in Gulshan—Dhaka’s fanciest neighbourhood, bustling with international development professionals—he commented on the increasing amount of financial support for climate change research and proposed that the title of my research proposal ought to mention climate change.

Although I followed this advice, I wondered whether this inclusion of climate change deflected attention away from the most pressing concerns that arose during my previous study. Climate change has become a buzzword used to attract donor funding, but to what extent do climate-funded projects address coastal vulnerabilities and needs? How does the idea of climate change shape the direction of development interventions in the Global South? To what extent do these interventions correspond with the concerns of the populations they seek to help?

I returned to Bangladesh in 2014 to explore these questions further.  On ‘World River’s Day’ in 2014, I accompanied my friend Sanvi to a workshop organised by a grassroots environmental movement (GEMOB) in southwest coastal Bangladesh. We arrived on foot to the basement parking area of a simple three-story plastered brick-building in central Khulna city. The concrete space was filled with several rows of plastic chairs facing a table with a large poster with the words ‘Save our Rivers’ in Bangla hanging above it. There was no fan, no air-conditioning. The conditions were like in so many places in Bangladesh. It was a ‘development’ meeting conducted entirely in Bangla with no presence of English-speaking ‘international experts’ or donors – making it fundamentally different from the air-conditioned, mosquito-proofed bubble of Dhaka’s development industry.

The meeting was fully autonomous from development-project related funding because GEMOB does not depend on, nor seek to attract, donor funding. Thus, rather than an official performance of narratives emphasising how project activities are needed and successful so as to legitimise them to donors and relevant stakeholders, the GEMOB participants each voiced their personal views on pressing environmental problems in the coastal region – and how the developing industry is in many ways exacerbating the problems. One of the participants, Mr Shahid, stated the following:

Climate change shobche darun masala [climate change is the most amazing spice], add climate change, poverty alleviation and gender and you will have a recipe for success for your development project [funding application]. But will this ‘recipe’ help save the river?

External ideas, external institutions, and external resources shaped the current form of Bangladesh and its state—from the creation of colonial railways and World Bank embankments to its dependency on development funding allocated to poverty reduction, modern agriculture, and now climate change. I am a second-generation Bangladeshi born and raised in Sweden, and I have grown up in a society where media portrayals of Bangladesh are often victimizing, pauperizing, and condescending. The image of Bangladesh as a climate change victim reproduces such historical imaginaries of its inferiority while ignoring its complex past.

Misreading the Bengal Delta combines detailed environmental history with an ethnographic study of southwest coastal Bangladesh to show how the development industry tends to simplify the complexities of a wetlands delta in ways that may exacerbate environmental risks and the vulnerability of the people it seeks to help. My intent is not to deny climate change, but to show the risks of development projects attributing environmental change to climate change, even when it is not the case. Until the 1990s, global warming was often associated with “climatic change,” an index of change in the climate system to which interseasonal variations in weather would contribute. Since then, the term has been increasingly replaced by “climate change,” a discursive shift from an adjective to a noun that denotes the role of climate as the main causative agent of interannual weather variation (Hulme 2015; 2011). Climatic change denotes the physical effects of anthropogenic global warming. It is a real material phenomenon that will subject Bangladesh to a certain amount of sea level rise, changing monsoon patterns, variability of the dry season, and increasing frequency and intensity of extreme weather events such as cyclones, thunderstorms, and tidal waves (Hanlon, Roy, and Hulme 2016). By differentiating between physical processes of climatic change and the discursive ideas of climate as the main cause of change, my research demonstrates how climate change can be a powerful discursive phenomenon that alters expectations of causality.

Bangladesh’s environmental crisis goes beyond climate change. This anthropological study shows the different ways in which development interventions are based on mistaken causal explanations, such as misreading floods, sea level rise, food insecurity, and coastal vulnerabilities. This critique of the development industry and how it risks failing the environment and society in coastal Bangladesh is urgent and intensified with the global covid-19 pandemic starting in 2020. The intersection of pandemic and cyclonic events in 2020 highlights the importance of a proactive government, but also the need to create a public healthcare system with universal coverage and to create a system of citizen entitlements to reduce societal inequalities. Zoonotic epidemics are likely to increase in frequency as industrial food production and habitat loss worsen in our current economic system. For Bangladesh to survive future challenges, long-term governance and infrastructure is of the essence, for without such a system structural violence and inequality prevails. This attention to social injustice and citizen entitlements tends to be neglected in development discourses of Bangladesh.

Climate change adaptation solutions, such as embankments, brackish aquaculture, and intensive modern agriculture, are the latest repackaging of narratives of improvement dating back to colonial times. In the present, such translations risk becoming climate reductive, as floods, salinity, food insecurity, and coastal vulnerability are cast as caused by climate change. Such narratives oversimplify the complexity behind these phenomena and obscure the fact that capitalist practices and technologies weaken environmental and livelihood capacities. This is further exacerbated by widespread social inequalities arising from decades of Structural Adjustment Policies in an aid-dependent state. Engaging with context helps us move beyond narratives of improvement positing Bangladesh as a climate change victim and ensures that funds directed to climate change actually help strengthen coastal livelihoods and protect ecosystems. Future research and development interventions must pay more attention to socioeconomic equality and scrutinize the actions of government decisions like introducing a coal plant in the Sundarbans and expanding industries in agrarian coastal regions. To what extent may the promise of future growth worsen Bangladesh’s current problems of environmental degradation, pollution (air, water, soil, noise), and structural health inequalities both today and in a climate uncertain future? 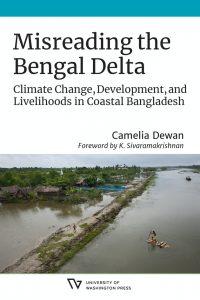