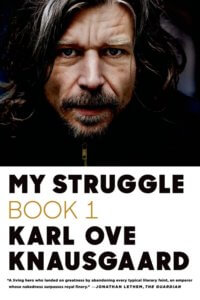 The Great Literary Debate in Norway.

There has not been such a big and intense debate about literature in Norway since 1956, when the novel The Song of the Red Ruby by Agnar Mykle came out.  That novel has descriptions about youth and their love life, and it made a commotion. Like the commotion around this recent one.  I’m of course talking about the heated debate around the literary work of Proustian size, My Struggle, by Karl Ove Knausgård.

My Struggle is a work published in six books. The first book, Min Kamp, was published in 2009, and the last book in 2011.It was a work that was written at the same time as critics criticized the first books of the work.  The novel got immediate attention among readers of literature and then became popular among people who did not read very much. The critics praised it, and people started talking about it. Along came the critics of the literary critics. One of these critics was the Norwegian writer Jan Kjærstad, who argued against the unanimous praise among other critics.

Academics and literary professors warped between ecstasy and frustration. First of all, they were delighted because the literature debate had finally gained momentum. Then in frustration, because people lacked good concepts about what kind of literature this was.

Thus, there were several perceptions about the work before the writing was finished, which was quite peculiar. One perception was that it was a novel in the autobiographical genre. Some called it extreme realism; others called it a literary documentary. Others again claimed that it was a groundbreaking piece that could hardly be called a novel.

Newspapers, blogs, and discussion forums on the internet offered many opinions and impressions of the books. Some said that it’s all just a media hype and that there was nothing new in the novel at all. They also suggested that the title of the book was speculative because it has the same title, but in Norwegian, as Adolf Hitler’s Mein Kampf.

What is certain is that similar literature has been written in Norway before, for example, Teori og praksis by Nikolaj Frobenius. All this attention gave Knausgård a large number of readers. The first books were already translated into German while Knausgård wrote the sequels. A literary prize was awarded for the first book. He has been nominated for Nordisk råds litteratur pris (The Nordic Council’s Literature Prize), and others again talked about him being Nobel Prize worthy.

Knausgård said in an interview with NRK (the public television broadcaster in Norway) in the autumn of 2009 that he wrote his life into literature and that he put the narrator’s view within himself. He wanted to enter into the innermost being of life.

“It was only there, into the most important elements, towards the innermost core of human existence, I was going to move.”*

His project was to get into the smallest components of the human psyche and then try to find something that is essentially human. To do this he had to build on his own thoughts and experiences. He must reveal his inner being. He must write his own life.

In life, there are small and trivial events as well as big and meaningful ones. This is what Knausgård had as a frame for his great story. This is where he searches for the core inside himself and the core in humanity. He reflects upon his life while changing his children diapers. He gets frustrated in a parents/children’s group with only women. And he thinks to himself that he hates it and will not go there again.

The worst thing he encounters during his residence in Sweden is what he thinks is a nauseating politic correctness, especially in kindergarten where kids are treated as persons without a gender, and in dinner parties where people are so politically uptight about being perfect.

The work in its magnitude specifically addresses what it is like to be an adult man with family and children at a time when it is up to the man himself to determine what role he will perform in the family and in society. For gender roles, there are no longer any guidelines.

The private person Karl Ove Knausgård has said he is unable to say what he really thinks about subjects and people in front of other people, but as an author, he takes a step out of that societal prison and gives the reader his sincere thoughts, feelings, and opinions. He goes straight into the taboo of what it means to be private in public. He turns the puritan Scandinavian statement, “one can be personal but not private,” on the head.

My Struggle has been a literary and social experiment. Karl Ove Knausgård has taken a fight for us. He has crucified himself for the sake of the reader. It has been a great strain for him and his family to be so private in public. He almost committed a literary suicide. After he finished his work, he said that he didn’t want to write anymore. Nothing like this has ever happened in the Northern countries.

I think one of the reasons Knausgård wrote essays on art and about Hitler in book six is because, as he writes at the end of the book, he cares as an author, so he wants to have these views about European history and culture written and published before he was going to give it up.

What is interesting with Knausgård’s reading of Mein Kampf in his essay about Adolf Hitler is his focus on Hitler’s ambitions to be a painter and his belief that Hitler was not just a manifestation of evil but an equally complex person like everyone else. Knausgård emphasizes the fact that most writing about Hitler focuses on his life in light of what he did as a dictator in a reckless regime. This means that we can’t understand his personality as a young man and a frustrated wannabe artist because our understanding of him is so influenced by what he did later in his life.

This is a part of Knausgård’s reflections upon the concepts Me, You, We and It. A human holds the history of humanity and its own story. In society, the individual is part of the community (We) and at the same time an I (Me).

The tension between being an I and being We can be very problematic. In order to maintain a healthy mind and identity in a complex world, We need a balance. The balance between being part of the masses as a higher unit, as in the case of Adolf Hitler’s speeches and mass gatherings, and how to self-reflect as an I, as in the case of Knausgård’s narcissistic self-examination in the writing process, goes through You – the other person. It is through an experience with another human being that one finds dignity and balance. Failing to do so, and losing grip completely, is to define people as It – as an object, a thing without value.

Thus, he also had to write about his thoughts and feelings about his close friends and family and, to an extent, expose unpleasant sides of these people. He has received negative feedback from several relatives. I think it is Karl Ove Knausgård himself who pays the price for this liberation project.

It was a liberation project for sure and an experiment. Through his writing, he tried to get as far into his most intimate and awkward thoughts as he possibly could because it’s only in those spaces that he can defuse them. This is what makes it so liberating for the reader. This is where we meet. This is where we can free ourselves from shame and pain, and where we see each other.

*Translated by the author of the article from Norsk.