As a writer, my friends on my social media accounts mainly consist of people working in the publishing sector and media: Publishers, writers, journalists, translators. Quite a lot of people on this list are from Georgia, a neighbouring country to my homeland.

Since the year started, posts shared by Georgians on my friend lists suddenly became more intensive and colourful, my newsfeed flowed with dynamic and heart-warming photos and videos from book events in Tbilisi. While I was following those photos and videos with amazement and jealousy, they were not surprising because Tbilisi has been declared “The book capital of the world” in 2021. This has turned the city into a hotspot of culture where writers, poets and publishers from different corners of the world have gathered.

It took me not very long to observe this scene in my newsfeed with admiration. One day, one of the publishers inboxed me to invite me to the Tbilisi International Book Fair. Georgians are friendly and cheerful people. Therefore, I took it quite seriously when the publisher invited me via my Facebook account rather than through e-mail.

However, an official e-mail came soon, contact person sent me details about where I was going to speak, who would be my moderator, the topic etc. And only after two weeks, one morning, I flew from Norwegian winter to a different clime — Tbilisi, a hot city with a home-like sky. 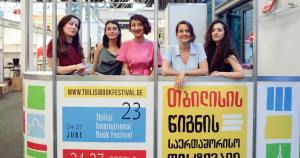 Although Tbilisi International Book Fair (June 24-27) was a part of the events under “The book capital of the year”, these events date back many years. The book festival is held in Tbilisi almost every year since 1997 except last year due to coronavirus pandemic, and even at that time, organisers informed people about new books and authors via “virtual tour”. The festival’s goal has not changed since that time — popularising reading culture and developing the publishing sector in Georgia.

When saying book fair is the central part of the festival, I am not making much of it. The huge book fair, held in the “art fair centre” in Expro, Georgia, offers visitors a pretty wide range of publishing products and accessories with markedly high discounts.

While walking along in the fair, the first thing you would notice was a crowd of people, even though organisers had set the requirement of online registration in advance, considering existing circumstances due to the coronavirus pandemic. It is evident that people missed seeing one another and joining different events as I felt they looked at each other almost more than books. Enjoyment in their face indicated a completely new thing to me; buying books in the open air, touching them physically without any barrier, having a chance to converse with others looking eye to eye was remarkably celebrated by the crowd.

Just as all Caucasians, Georgian people are also in love with socialising and live conversations. Seeing Georgian book lovers after a long period of an isolating pandemic impressed me deeply.

There were books in a number of foreign languages, predominantly in Russian (typical to a post-soviet country, Georgia is still a relatively “Russian-speaking” country). However, readers mostly preferred books written in the Georgian language, and particularly Georgian authors were noticeable. This is not surprising because several local authors include Dato Gabunia, Salome Benidze, Tamta Melashvili, Tea Topuria, Ekaterine Togonidze, and Mixail Tsxelashvili etc. have been published with the support of the public and private sector and become bestsellers in the last few years. As they are newly published works, they are pretty expensive; despite being highly affordable for a country like Norway, they should be considered incredibly expensive for Georgian readers, who have just survived a pandemic with no social protection of the population. On the other hand, it was quite possible to purchase them with discounts at the fair and Georgian readers benefited from this opportunity.

Readers were primarily interested in novels. A few publishers I talked to the mentioned fantastic genre was quite popular there. Generally, they were delighted with people’s attendance, liveliness and number at the festival. 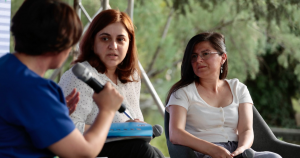 I met Eka Kevanishvili, a Georgian journalist who was going to work as a moderator in my speech a little before the event. I have known Eka for many years; she works for the Radio Liberty Tbilisi branch and writes highly heroic poems for Georgian society. We spoke Russian with her. In general, whenever I visit Georgia and talk to my Georgian colleagues, we switch to Russian, hiding my poor English. One of the rare beneficial remnants of the Soviet Union is speaking Russian; this language still allows Caucasian nations to understand one another. Eka brought me a gift, too — a vintage notebook to take notes for my future novels.

Being proud of having a crowd of people in an open festival after a long time could be seen in Eka’s face too, she did not hide her happiness:

“Books are still widely sold and read in Georgia, which gives me hope to become a much better society.”

Liveliness was obvious to see also in speeches and book presentations as a part of the festival. Firstly, I thought it was only about a keen interest in Georgian authors and published products in the Georgian language. However, quite a lot of Georgian people joined the event in which I gave a speech. Eka and I decided I would tie my topic, “War and woman in literature”, to my biographic novel “The Camp”, published in Azerbaijan last year; in other words, we would organise a mini-presentation there. That was an excellent idea; Georgian translators and journalists approached me and asked for more detailed information about the book at the end of the event; some media representatives even appointed a meeting with me for an exclusive interview.

According to my observations, there were still some restrictions due to the pandemic. There would be more events, and more frequent book presentations would be organised under the festival in previous years, in contrast, I think, the list has been shortened and chosen more carefully for this year. Still four-day festival was considerably enjoyable.

On those four days, guests got an opportunity to engage in the presentation events of newly published books, meetings with Georgian authors, translators, publishers and literary critics were organised for readers in the frame of the Tbilisi International Book Festival. Similarly, panel discussions with local and international speechmakers and entertaining and educating events for children were held.

I stayed in Tbilisi for more than ten days after the festival. I am in love with this city because it is the capital of the book and has the dearest sky to me. Everything is unbelievably easy and beautiful under the Tbilisi sky, even more eternal to me. I walked around the streets of Tbilisi on foot and realised that the book festival did not end. Despite not entering any bookstore during my walks, books were everywhere; in restaurants, in front of mobile booksellers in metro stations entrances, in the pavements of the high street, Rustaveli Street, in the underground passages. Those second-hand books, primarily written in Russian, were bought by enough people there.

Gunel Movlud was born in Azerbaijan. As a pursued Azeri journalist, translator, and poet, she has been living in Norway as an ICORN writer since 2016, where she has won the “Words on Borders” poetry prize in 2017. In 2019, she was published in Aschehoug anthology of refugee poets, To kiss a desert. To kiss a wall. Gunel is a women’s rights activist and writes against violence, oppression, and injustice.