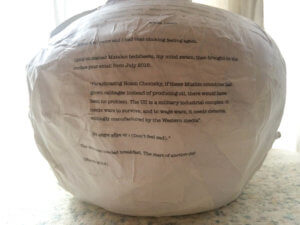 On a college trip to California many years ago, I drove through Joshua Tree National Park.

I sensed an underlying presence breathing through the landscape. At night the black sky, saturated with unspoken loss, revealed stars bursting with secrets. I felt the earth’s steady turn. Pictograms and petroglyphs carved into the rocks told the story of the Native Americans in the time before they were eradicated. The story of the past and a prophecy of the future.

The American dream, a theatre of death. 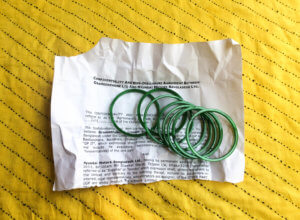 My studio is in my parents’ house. Outside the window the old Magnolia tree has just come into bloom. My grandfather loved this tree and as its heavy white petals fall without a sound I remember him, coconut oil in his hair and smelling of cloves, a scent like his laugh – rich and deep.

I start work on a ভাঙ্গা কলসি (broken water vessel) made out of used bed sheets, rice starch and email print outs. It is called ‘Military Industrial Complex’.

The emails I use for it are from my aunt who’d written to me after I’d confided in her about Islamophobia in the UK and hurtful comments a friend had made.

“Paraphrasing Noam Chomsky, if these Muslim countries had grown cabbages instead of producing oil, there would have been no problem. The US is a military industrial complex, it needs wars to survive, and to wage wars, it needs demons, willingly manufactured by the Western media”.

That was a year ago. Her words still echo in my mind.

To make my broken vessel, I begin to tear the white bedsheets and soak them in rice starch. The smell of cotton and rice comfort me, a reflex response from somewhere deep within. When dried, the texture of the fabric makes me think of my father’s skin; my father who came to London in 1963 and still wears his lungi as he quietly eats his rice.

I am British-Bangladeshi from a Muslim family background. I’ve learnt to take pride in my ‘otherness’ but nevertheless, this identity undeniably comes with its baggage. The British establishment, welcoming as it has been, has certain implicit and explicit expectations of me. For instance, I should speak out against Islamic fundamentalism (agreed) but if I stay quiet about murder committed by the British state in my name, that’s fine. That goes un-noticed.

As a ‘moderate British Muslim’ (to go with others’ definition of me) I am expected to help manage the biggest geo-political conflict of our time, by speaking out against radical Islam, but without disrupting the war machine that, I believe, sustains it.

I am both part of the problem and part of the solution to the existential threat. So even though I am not clear about my own relationship with faith, I must declare where I stand.

As I layer fabric, paper, text and rice starch I try to process my thoughts. Is my state genuinely interested in combating extremism (which has hurt ‘Muslim’ countries the most), or does it play a duplicitous game.

It wages war against radical Islam, whilst simultaneously supporting Saudi and other radical Islamist forces when this serves its needs. Let’s consider that terrifying paradox for a bit. The War on Terror, a billion dollar industry, has inflamed extremism and made the world polarised, achieving the opposite of its advertised aim. Yet still it continues. And doesn’t ‘terror’ in fact enjoy a symbiotic relationship with the war machine? Like a love-hate relationship; can’t live with, can’t live without. Sadistic lovers thrashing about in the dark.

I apply the words from my aunt’s email to my vessel : “The US is a military industrial complex, it needs wars to survive, and to wage wars, it needs demons, willingly manufactured by the Western media.”

In the weeks I make the broken vessel Julian Assange is arrested in the UK. Assange, who revealed unspeakable truths about Western atrocities in the Middle East, is branded a Russian agent and jailed.

I cannot say if he is guilty of links to rightwing leaders or the sexual allegations he denies. I just don’t know. But I know that in sourcing classified documents (including approximately 90,000 reports on the war in Afghanistan, 400,000 reports on the Iraq war and 800,000 Guantánamo Bay detainee assessments, along with US diplomatic cables) and publishing what he chose(not they), he dared to defy the Gods. He cast a mirror to the bottom of the well. And through his mirror, the world could see that people of the West can be very bit as ‘barbaric’ and ‘medieval’ as people of the East. That people of the West can also punish a human being for not sharing their beliefs and make a man whimper like a dog before he dies.

Assange and his mirror had to be smashed as an example to us all.

Such is the ‘free world’ that prides in ‘free speech’. Free speech be damned. They’ve put him in a cell where he spends 23 out of 24 hours in confinement. If they can’t kill him, they’ll break him instead. Was there ever a whistleblower who survived to sing again?

Assange grips a book in his shackled hands as he is arrested, Gore Vidal’s History of the National Security State. The back cover of the book says it is an analyses of the “historical events that led to the establishment of the massive military-industrial-security complex,”

Military Industrial Complex: Assange holds his book while I hold my vessel, one of life’s strange symmetries.

As I finish my broken vessel I wonder, can a nation built on slavery and genocide escape its original sin?

If they’d atoned it might be different. “Everything went wrong with Trump” they cry – as if anything was right before.

The only nation to have dropped a nuclear bomb on another now has a maniac at it’s helm. Like a gong of death he’d destroy us all. Frightened of their own image, they blame others for the monster they have created. But it’s likely this was prophesied long before the Russians came to play.

The foul wind that billowed in the sails of the slave ships still blows. 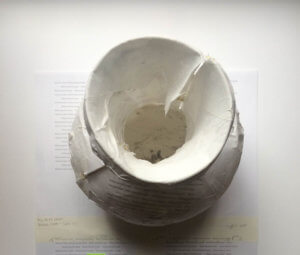 Outside my studio the earth’s waters churn. School children protest to save a planet on the brink of collapse. The ‘human flow’ of mass migration mingles with the sea. Authoritarian leaders ride their juggernauts of hate. Balances shift as new powers emerge, including powers with secret detention camps transporting children on ghost trains. My Magnolia tree shivers.

The stars are bursting with secrets. I feel the earth’s steady turn.

“Only when the last tree has been cut down, the last fish been caught, and the last stream poisoned, will we realise we cannot eat money.” ― Cree Indian Prophecy

Sofia Karim (architect, visual artist and activist) has practiced architecture for over 20 years at studios including Norman Foster’s in London and Peter Eisenman’s in New York. Her practice combines architecture, visual art, activism, and writing. She campaigns for Bangladesh human rights and global artists’ freedom of expression.