This is my understanding of the matter of identity.
I don’t exactly know who has the power to do such a thing. Who has the power to give rights and take away rights. We call them politicians, dictators, immigration departments, and human rights organisations. I don’t know how they got so much power…

There’s a simple example I give about this matter of identity that I always share with students. I’ve told this story in many, many places. Many different people have heard it from me.

Being able to travel is a human right. Even if travelling puts your life in danger, it is still your human right to travel.

But the interesting thing about this in my life is that when I had Iranian citizenship, when I had an Iranian passport, when I had Iranian papers, I was not able to travel almost anywhere in the world. If Iranians want to enter into almost any country, they have to go through a terrible immigration process, which most of the times ends in rejection. Like, you’re a Norwegian or a British or an American — you can travel anywhere in the world you want without being stopped, ok? Norwegians, British, Americans, Germans, and so on – they have travelling rights not available to people from other countries, like Iran.

If you’re a Romanian, travelling the world is kind of impossible. 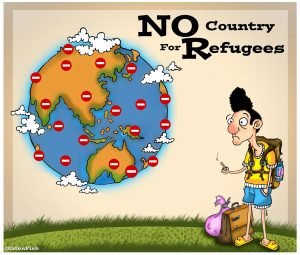 If you do a search on the value of passports from different countries, you will understand what I mean. Just a simple search will reveal enormous differences among countries and the value of their passports.

Another interesting thing is that when I was Iranian and had an Iranian passport, I was not able to leave my country easily because somehow Iranians are banned from entering most countries in the world. Today I have a Norwegian passport, Norwegian papers, and I’m carrying a Norwegian residency card on me, and I can go anywhere in the world I want without being stopped, without being asked questions, without needing to go through immigration process.

I hope I could help you understand what I mean about papers and identity by sharing this example from my experience. 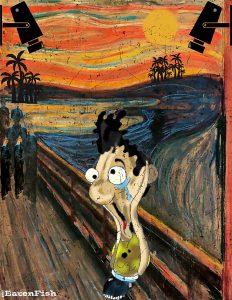 Somebody can sit down behind a desk and decide if you exist or not! 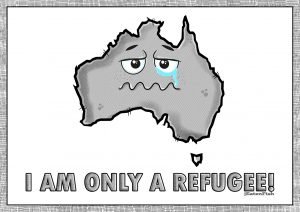 Ali Dorani is an Iranian cartoonist and activist who goes by the pen name EatenFish. He adopted the name when he was 21-years-old after the boat he was aboard sank in the Indian Ocean on his trajectory to seek asylum in Australia. Despite fleeing Iran in 2013 because his life was in danger, he would endure horrors at the detention centres that awaited him: After the sinking Dorani was saved, but taken into custody as a refugee – first to Christmas Island, then to Manus Island Detention Center, a detention center for asylum seekers. Manus Island was an infamously brutal detention centre in offshore Australia. Dorani describes being beaten and sexually harassed there until he was placed in solitary confinement. Despite the pain he endured, he found that drawing cartoons alleviated his mental health, entertained him, and allowed him to share what was happening on the islands. Dorani’s drawings focused on conditions on Manus Island, recording life in the refugee camp, and promoting his case through his work.

It is these cartoons that saved him; after submitting some of his cartoons on his experiences on the Island to an art exhibit focusing on asylum seekers in offshore detention centres, the director of the program took on his case. Bit by bit, EatenFish started getting the attention of the media and other activist organizations. Such activism got Andrew Marlton, an Australian cartoonist, to rally for Dorani and start a social media campaign among Australian cartoonists for the Iranian cartoonist. Despite such attention, Dorani was still being harassed by other detainees and prison officials. In 2016, he went on a hunger strike for 22 days, ending up in a hospital in Papua New Guinea for almost three months. While there, he received a message from Norway’s Department of Immigration, welcoming him into their country. With the help of International Cities of Refuge Network, which aided his relocation, EatenFish was finally free of detention.

EatenFish now continues his activism through his art, speaking to the public about Australia’s immigration policy, and has formed relationships with other artists throughout Norway. He has received several awards, including the Norwegian Fritt Ord Foundation labour grant in 2021

Ali Dorani, born 1991, also known as Mr. EatenFish, is an Iranian cartoonist, political activist, and blogger, currently living in Stavanger, Norway. He gained global recognition for the cartoons he created while being detained in brutal conditions in an Australian-run immigration center on Manus Island for four years. Thanks to the efforts of the International Cities of Refugees Network (ICORN), almost overnight popularity from numerous awards, and a worldwide campaign of tribute drawings, Dorani was granted asylum in Norway where he has been living since 2017.