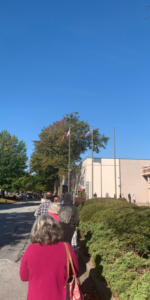 I waited in line for three hours to vote because I can afford to take time off to exercise my civic duty. For those with class privilege, in-person voting is, at worst, an inconvenience. The intentionally crafted obstacles to vote in person have made the practice challenging if not widely inaccessible to those without privileged identities. Voting in person cannot be used as a gatekeeping mechanism to ensure that only able-bodied, middle and upper class, white folks with reliable transportation and low risk of contracting COVID-19 are able to exercise their civic duty.

I voted on the first day of in-person absentee voting in Greenville, South Carolina. I stood in line for three hours as the voters around me slowly crept towards the entrance of the county government offices with few instructions or updates from officials. At first, I thought the three-hour line was a hopeful sign of voter empowerment in a deeply red state. I thought that people decided to stand in line to have their voices heard in the historical significance of this election. I felt energized by what I can assume were other progressive voters based on the proper positioning of masks that most people exhibited in line- all but one person in the three-hour window refused to wear a mask outside. Sadly, in South Carolina, proper mask-wearing can be seen as a political statement. I felt the symbolism of mask wearers showed solidarity and belief in public health.

As I overheard conversations of the mostly middle-aged and senior voters around me in the three-hour line, I realized this early voting turnout was a response to a deep sense of mistrust in the electoral system. Folks wanted their ballots counted; the sense of those waiting to vote was that the integrity of the mail-in ballot system is fundamentally compromised. Emily’s List (2020) reported on October 23rd that 50 million people had already voted early in the United States. Behind the energy of the voter turnout surge in recent weeks is a well-crafted system of voter suppression.

The population of Greenville County, South Carolina, is over 514,000 which contains ten percent of the state’s registered voters (Brown, 2019). In a county of this size, the main polling station has just 10 voting machines. Four additional satellite voting centers have since opened across the county to accommodate voters in both rural and more densely populated areas. Long lines were reported as soon as the four satellite absentee voting locations opened on October 12th. A community member at one satellite location reported just one computer to verify voter registration and only four machines in use (Hughes and Mitchell, 2020).

The South Carolina legislature allocated critical funding in the budget for new voting machines in 2019 to replace the 15-year-old machines around the state, last purchased in 2004 (Brown, 2019). South Carolina Senate Bill 140 states, “the unacceptably long lines in recent elections clearly illustrated that South Carolina is in dire need of new machines” (South Carolina General Assembly, 2019). The legislature refused to approve spending on new machines unless the Election Commission could verify that new polling technology was capable of printing a paper record of each vote for purposes of “transparency and accurate results” (South Carolina General Assembly, 2019). Budgets for new machines far outreached the Governor’s original allocation of $5 million for the 46 counties in the state (Cavallaro, 2019). The Election Commission requested $60 million for new machines that print the voter’s selection, which is then scanned by a separate machine.

Beyond outdated technology at polling places, long lines to vote reflect deeper structural problems. Election Day is not a federally recognized holiday in the United States, which means many workers are unable to take time off to cast their ballot. The socio-economic implications are clear; without reliable transportation to and from the polling station and without paid time off, voting in person becomes an activity that risks wages or job security. While mail-in absentee ballots are still recommended due to COVID-19 precautions, in-person absentee voting was one alternative to alleviate pressure to vote on November 3rd. In-person absentee offers a chance for some working people to vote on a day off or a lunch hour. However, in-person absentee voting hours at satellite locations from 9:00 am to 4:30 pm Monday through Friday, are completely inaccessible for most work schedules. Saturday voting would have the potential to increase accessibility for working families, shift workers, and those with commitments during the week. The main Greenville County voting location will be open on just two Saturdays in the month-long absentee voting period from 9:00am to 1:00.

Voting in person and the glorification of waiting in line is inherently designed to be accessible to able-bodied folks. When I voted, some well-prepared voters brought folding chairs and stools to ease the wait but the vast majority had to stand or sit on a curb for hours. There is a clear accessibility issue with long lines for senior voters or people with mobility restrictions. The solution provided by the South Carolina Election Commission is to allow curbside voting at every voting center. While I saw no designated parking space for curbside voting, this option is supposedly available to those who are unable to physically enter the building or unable to stand in line at length.

Critically underfunded systems, including public transportation, impact the accessibility of in-person voting. Greenville, South Carolina is a city with severely limited public transit infrastructure. If a working person who relies on the bus system can’t turn out to vote until the end of the workday, the recent wait times of two to three hours to cast a ballot could mean that voter will miss the last scheduled bus of the evening at 7:30 pm.

Lessons to be learned

In-person voting is a right that cannot be reserved for those with the privilege and ability to wait in line for hours on end. With recent mobilization and early voting turnout shattering records from 2016, I don’t find the wait times hopeful or patriotic; long lines to vote are a symptom of active voter suppression and an archaic system that favors the privileged. Outdated machines, low state budget allocation for voting technology, and a political commitment to underfund essential services will continue to compromise access to in-person voting and accelerate the decline of the democratic principles those in power have eroded over time.

Emilee O’Brien is a recent graduate of the Master’s in Educational Transformation Program at Georgetown University. She now resides in Greenville, South Carolina. Her professional background is in higher education with interests in Title IX, interpersonal violence prevention, and student civic engagement. Emilee earned her B.A. in Political Science and Poverty Studies from Furman University in 2017.