The massive numbers of refugees who fled to Bangladesh in 2017 joined hundreds of thousands of Rohingyas who had fled Myanmar in the past. Kutupalong, the largest refugee settlement in the world, according to UNHCR, is home to more than 600,000 refugees alone. 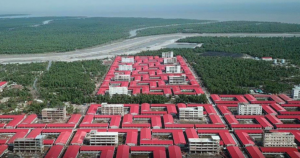 The Rohingya crisis — the most terrible humanitarian disaster in South Asia — is yet to show any tiny blip towards resolving the lingering deadlock. Call it a failure of diplomacy, or what you will, there is no denying that Bangladesh, the country now home to around one million Rohingya refugees did not raise enough uproar since the very beginning of the exodus to bring the international community to task.

There were stray moves, but none of those could set any meaningful plan to settle the score. However, in November last year, a small West African country, the Gambia, moved the International Criminal Court (ICC) calling for emergency measures against the Myanmar military for its genocide in the Rohingya-inhabited Rakhine state of Myanmar until a fuller investigation could be launched. Myanmar leader Aung San Suu Kyi rejected allegations of genocide when she appeared at the court in December 2019. In January 2020, the court’s initial ruling ordered Myanmar to take emergency measures to protect the Rohingya population still living in the country from being persecuted and killed and arrange for the peaceful return of those in Bangladesh refugee camps.

In August 2017, a deadly crackdown by Myanmar’s army on Rohingya Muslims sent hundreds of thousands fleeing across the border into Bangladesh. They risked everything to escape by sea or on foot a military offensive which the United Nations later described as a “textbook example of ethnic cleansing”. Rohingyas arriving in Bangladesh said they fled after troops, backed by local Buddhist mobs, kept burning their villages and attacking and killing civilians. At least 6,700 Rohingya, including at least 730 children under the age of five, were killed in the month after the violence broke out, according to medical charity Médecins Sans Frontières (MSF). Amnesty International says the Myanmar military also raped and abused Rohingya women. At least 288 villages were partially or totally destroyed by fire in northern Rakhine state after August 2017, according to Human Rights Watch.

Rohingya Muslims are one of the many ethnic minorities in Myanmar. They represent the largest percentage of Muslims in Myanmar, with the majority living in the Rakhine state. They have their own language and culture and say they are descendants of Arab traders and other groups who have been in the region for generations. But the government of Myanmar, a predominantly Buddhist country, denies the Rohingyas citizenship and even excluded them from the 2014 census, refusing to recognise them as a people. Since the 1970s, Rohingyas have migrated across the region in significant numbers. Estimates of their numbers are often much higher than official figures. In the last few years, before the latest crisis, thousands of Rohingyas made perilous journeys out of Myanmar to escape communal violence or alleged abuses by the security forces. UN Secretary-General Antonio Guterres termed them as “one of, if not the, most discriminated people in the world”.

The massive numbers of refugees who fled to Bangladesh in 2017 joined hundreds of thousands of Rohingyas who had fled Myanmar in the past. Kutupalong, the largest refugee settlement in the world, according to UNHCR, is home to more than 600,000 refugees alone.

Currently, dialogue between Bangladesh and Myanmar authorities has remained stalled. Some time ago, although an agreement for the return of refugees was reached (in early 2018), not a single refugee returned. They said they would not consider going back unless a congenial atmosphere is created including the assurance of their citizenship.
UNHCR, the UN Refugee Agency, is calling for renewed support for displaced and stateless Rohingya communities both within and outside Myanmar. Three years on from the latest exodus of Rohingya refugees who fled Myanmar and sought sanctuary in Bangladesh from August 2017 onwards, challenges persist and continue to evolve. The COVID-19 pandemic has added additional complexities.

It is estimated that up to three-quarters of the Rohingya people are today living outside Myanmar. UNHCR and the Government of Bangladesh have individually registered around 900,000 Rohingya refugees in the refugee settlements in Cox’s Bazar. Bangladesh, itself an impoverished and overpopulated country, has demonstrated a profound humanitarian commitment to Rohingya refugees. It has ensured their protection and extended life-saving humanitarian support.

Strange, however, it may seem, none of the global powers is yet to consider the Rohingya issue a serious concern necessitating intervention, either in their own capacities or as members of various international fora including the UN. Clearly, it is a lack of global response — of big powers — that has led things to linger for so long, at the expense of the host country.