To defeat Awami League’s authoritarianism, Bangladeshi progressives must dismantle the structure of influence of this faux liberalism, to afford future protesters a fighting chance to develop a movement. The alternative is permanent defeat and the end of progressivism, of hope.

Sajeeb Wazed Joy criticises the American police for brutally suppressing its citizens during the ongoing Black Lives Matter protests, and demands answers from the US envoy to Bangladesh. Professor Imtiaz Ahmed criticises the American police for unlawful arrests and killings at expert academic discussions about state terrorism, and questions the validity of looking upon the US as a world leader paving the way for lesser nations. Eminent urban and expatriate Bangladeshis send hashtags into the ether to show solidarity with the Black Lives Matter movement. Pseudo-liberal Bangladeshis applaud these words, accept them as actions, celebrate the neo-nationalism inherent in the expressions of these towering figures. America is burning; Bangladesh is as buoyant as a reinforced boat. 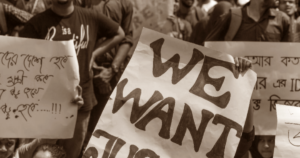 Joy is heir apparent of an authoritarian Awami League that rules by oppression. Ahmed does not criticise said regime’s near-daily acts of state terrorism because he wants to remain a well-fed, parasitic member of the elite class drinking from the teats of those ordering and carrying out oppressive acts. Bangladeshi civil society elites opportunistically pledge allegiance to the flag as an act of conscientious liberalism, hoping to one day be where Ahmed and Joy are. Two years ago, when Bangladeshi school students took over the streets of Dhaka to protest against corruption, injustice and oppression, they were nowhere to be seen. Their loquacious pontification was replaced by, at first, a deafening silence, then neo-nationalistic apologia for the oppressive state. A year and a half ago, when garments workers descended on the streets on the margins of Dhaka to protest against capitalist greed, corruption and injustice, Joy, Ahmed et al. exercised silence at the disdainful inconvenience caused by the proletariat. The students and their allies were beaten bloody. The workers sans allies that came after them had sticks, stones and rubber bullets flung at them. The crimson on the cleared streets was scrubbed clean by the wheels of progress, atop whose chariot sat Joy, Ahmed et al., crushing protests before they could become movements.

America is going through a defining moment. Progressives all over the world should stand by the protesters demanding systemic change, should reinforce the movement when it falters, for sustaining the Black Lives Matter movement until it succeeds, benefits the cause of progressivism worldwide. Bangladesh – where, regrettably, progressives are in short supply – threatened to have two defining moments either side of a so-called general election which manufactured a landslide for Awami League the way explosives do for mining and construction companies on indigenous land and ecosystems globally. Bangladeshis have suspended disbelief since 30 December 2018, yet, in the absence of lobotomies, they still struggle not to cringe, shrug or smile slyly when trying to convince themselves, much less others, that what transpired on that day can be called an election. But for the unconscionable complicity of the elite class and self-preserving compliance of swathes of the upper-middle and middle classes, it could have been very different.

The spark for protests is the same regardless of geography. For George Perry Floyd being murdered by the police wilfully using excessive force on 25 May 2020 in the US, read Dia Khanam Meem and Abdul Karim Rajib being killed on 29 July 2018 by a speeding bus allowed to operate because of the corruption prevalent at the Ministries of Shipping and Road Transport and related unions, or garments workers starved of fair wages and basic rights by the inhumanity and crony capitalism of Big Garment up to January 2019. When protests erupt, the spontaneous outpouring of uncontrollable rage may be expressed in words and actions that upstanding members of society find objectionable. In the process of protests coalescing into movements around clear objectives and demands, the justified rage becomes more focused on the systemic, institutional and structural flaws or corruptions at the heart of individual instances of injustice that instigate the protests. However, the upstanding members of society mount their high horses and move on before that can happen. They prevaricate by pseudo-intellectualising the accepted norms of civilisation, oblivious to the facts that by neither starting nor partaking in the protests or the movements, they have no authority over their language, and that protests and movements by their very nature challenge the system by being uncomfortable and incendiary – wilfully oblivious, indeed, to the civilisation they espouse and adhere to keeping them comfortable by depriving others of their fundamental rights and lives. This is where Bangladesh lost the chance for meaningful change in July and August 2018 and January 2019, where the US fights on beyond May 2020.

The protests in the US have had to contend with the obstacles to organising and collectivising presented by the Covid-19 pandemic. Those in Bangladesh were unable to overcome the almighty obstacles presented by authoritarianism. This is in no small part due to the active participation of too many Bangladeshi pseudo-liberal sheep in the oppression of the citizens of the nation by the manner in which they express their liberalism. They accept, praise and perpetuate state terrorism directed at its conscientious citizens, because they are part of the system that these citizens – the students in 2018 and workers in 2019 – oppose and fight to change. Bangladeshis scavenging amongst the ruins of the many defeats suffered at the hands of oppression will find green shoots of progressivism if they look hard enough, progressivism trying to hide in the shadows to escape persecution and simultaneously fighting to make itself heard and felt. The pseudo-liberals basking in the glory of victory will obfuscate and obey their way further into the bowels of an authoritarianism mutating into more oppressive versions of itself by the day. They will be usurped along with their masters. To defeat Awami League’s authoritarianism, Bangladeshi progressives must dismantle the structure of influence of this faux liberalism, to afford future protesters a fighting chance to develop a movement. The alternative is permanent defeat and the end of progressivism, of hope.