What I like about street art are the stories it tells. They inform, educate, inspire, and uplift. They interject and connect. They render the invisible, visible, and make the ugly, apparent. They reinterpret, decenter and protest. They appeal to the unknowable.

I’m not an artist, an art critic, or even a visual anthropologist, but reading the walls is one of the ways I get to know a place. San Francisco is a place of dense and diverse neighborhoods (second only to New York in the country). Built upon the territory of what was once the Ohlone Indians’, the Spanish set up Missions, the Mexicans held the territory for a while, and the British, Russians, and Americans vied for control. Its current avatar started with the Gold Rush of the 1840s. 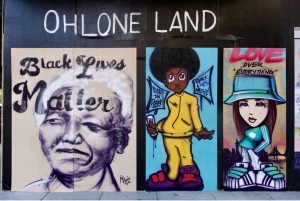 In 2020, as the world struggled with exponentially growing cases of Coronavirus, overcrowded hospitals and millions of dead, San Francisco and other Bay area counties ordered all non-essential businesses to close and residents to stay home in the first such mitigation effort in the US. Traffic came to a standstill, all non-essential business closed and boarded up to prevent theft and vandalism, and 6.7 million people “sheltered-in-place”. In the eerily quiet, shut down streets of the pandemic, San Francisco rose.

The plywood boards that covered storefronts became canvases upon which known and unknown artists painted abstract geometrical paintings, nature scenes, flowers, animals and girls swinging. Posters, window signs, and chalk art also announced things like “The Virus is Greed”, “Fuck Trump”, “Wear a Mask, Stay Safe” or “So Far I’m Not like – ing this Episode, But We will Survive.” Others spraypainted lyrics, “We will Get By, We Will Survive” In a show of encouragement, many read: “We can do this” “We’re all in this together” or “Together We Will See It Through”. These transitory messages and images supported San Francisco as a place and as a community: “SF Strong”, “Stay Strong San Francisco,” “Stay Healthy San Francisco, Lots of Love, We’ll See You Soon”, and “We are Brave, We are Hopeful, We are Resilient, and We are San Francisco.”

Underneath the words, “We can do it,” an artist reinterprets the iconic image of Rosie the Riveter by putting her in a red polka dot mask and long plastic gloves. Essential workers were often called out, and health workers depicted as superpowers. 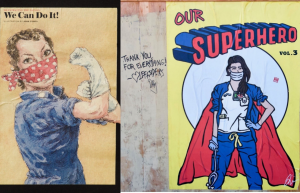 In addition to other appeals for people to “Stay Safe” and “Wear a Mask”, two masked women hold signs reading, “Stay Safe” and “Stay Home”. In a city with the largest percentage of gay, lesbian and trans people in the US, street art also depicted things like two masked (male) sailors kissing or a bare-chested man posing in soap bubbles. 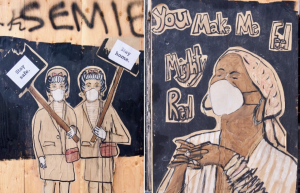 Two of my favorites read: “You Make Me Feel Mighty Real” and “Fight Covid with kindness (and brownies)”. Is the playful image of a couple embraced in a kiss through white masks speaking to the absurdity of social isolation? 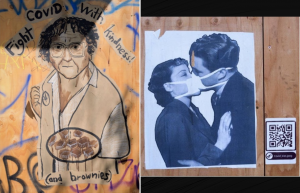 Some signs simply wrote things like, “Love and Compassion Will Heal Us” or “Today I will Unmask my Heart”. The following mural is not just beautiful and hopeful, it quietly upends stereotypes, portraying a Black female doctor standing over a community of people. It declares “Racism is a Public Health Crisis”. 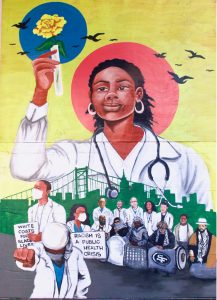 At the time, Trump was President, political rhetoric threatened social relations, women’s rights were called into question, and most horrifically, African Americans throughout the country were being murdered by police officers, often in cold blood. Some simply said, “George Floyd” or “Say their names”. More than one filled a complete poster with names of the dead. George Floyd was depicted with angel wings. Posters, placards and plywood art cried out, “Stop Police Violence”, “Don’t Shoot” “I can’t Breathe” or “Let Us Breathe”. 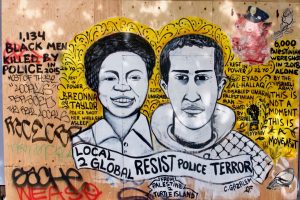 Street art quoted Martin Luther King — “Injustice everywhere is a threat to justice everywhere” and Desmond Tutu, “If you are neutral in situations of injustice; you have chosen the side of the Oppressor”. Another: “You must never be fearful about what you are doing when it is right.” And many “No Justice, No Peace”. 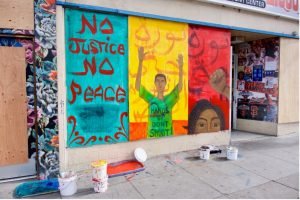 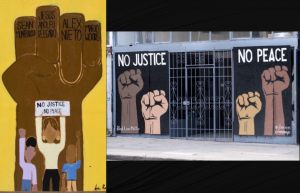 There were many variations of “Black Lives Matter”. “Grandma Yaeko says ‘Black Lives Matter’” or the phrases Black is beautiful, Love is all we need, Make the change accompanied huge “B”, “L”, and “M”. 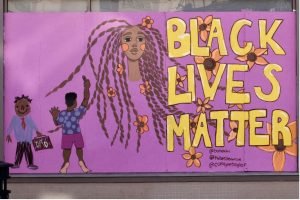 A sign in big white, block letters read: “The most unprotected people in America are Black Trans women”. Using the color purple on some of the letters made a second message — “protect Black Trans women” — stand out. And in a pun on the name of the neighborhood, Lower Haight, the words “Lower Hate” stood on backdrop of monarch butterflies. 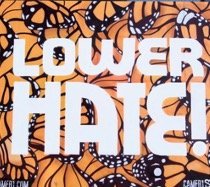 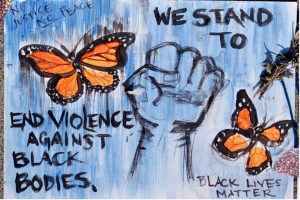 “Solidarity”, “Equity”, “Peace”, “Love” and “Justice” filled each petal of a flower in one mural. “It Will Not Consume Us”, “Power to the People” or “Together We Stand” were the bylines to other images.

Alongside street art about violence against African American and the pandemic, an image of a yellow plastic honey bear with a pointy nozzle on top proliferated during shelter-in-place. For some, it provided a comforting, lighthearted and familiar image. For others, it symbolized the city’s shifting demographics and the concomitant gentrification that has pushed, and is pushing, so many local people and artists out. Many find the honey bear’s popularity extremely troubling and emblematic of deep tensions in the city. 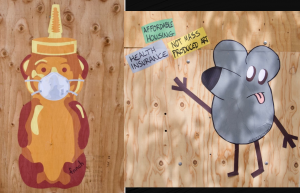 The honey bear artist, known as “Fnnch”, is a white, Stanford alumni and former technological entrepreneur (or “Tech Bro”) cum artist. He apparently wanted to add something that was positive, nostalgic and inclusive to the street art scene. The honey bear proliferated during shelter-in-place, dominating walls and windows as well as public discourse. But before this, in 2018, Fnnch challenged San Francisco regulations around street art by affixing 450 posters to utility poles with zip ties overnight. Adhesives are illegal and subject to fines, but legal zip ties are legal, allowing the honey bears to remain in place for seventy days. A local television station, KTVU, featured the story, and according to a Fox2 website, the episode highlighted the absurdity of laws governing street signs.

Fnnch has capitalized on the honey bear image to marked criticism. He sells specialized images such as one depicting Mark Zuckerberg, has contracts with commercial entities (like Williams Sonoma), and has collaborated with city government in public health campaigns. During Covid, he sold over 20,000 window images by launching a game called the “Honey Bear Hunt”. Perhaps in response to criticism of the money he makes (which is itself dependent on access to public space), Fnnch’s honey bear raises funds for coronavirus relief and local justice organizations. He said that he prefers the democratic nature of street art – it’s free and accessible, but also profits upon a history of street artists some of whom faced violence and jail time as a result of their work.

The comic book artist, graphic novel author and street artist, “Ricky Rat”, is a prominent critic of Fnnch’s works. Ricky Rat (see photos above and below) regularly shows up in or near fnnch’s honey bear, often mocking him in the process – in one instance, Ricky Rat showed up in dozens of places overnight with messaging critical of bear. Doggtown Dro, another local street artist, argues that the honey bear is synonymous with gentrification and the displacement of artists. He insists that the problem with the honey bear is about inequity, and about who belongs where. When Fnnch was cleaning up graffiti that had defaced a rendition of the honey bear on the SF LGBT building, Doggtown Dro confronted him on the sidewalk arguing that it is unethical to accept opportunities that should go to QTBIPOC. The argument was posted on social media. 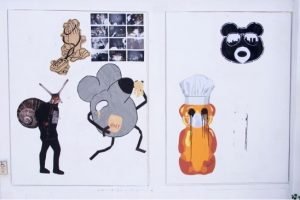 Others in the street art community also see Fnnch’s honey bear as a symbol of gentrification and think that the honey bear takes space that other local and poorer street artists could use.

Local arts organizations and individual artists collaborated in the long months of isolation. Some of the artists had been a part of the street scene for years – including Calamity Fair, The Dripup, Few and Far Women, Sirron Norris, Apexer as well as jermynovy, listrikki and the Manimal project as well as Lui Nova (all of which are on social media). A collective referred to as “Point the Void” solicited work from new artists. To varying extents, the artists and their work are accessible on the web and on social media. 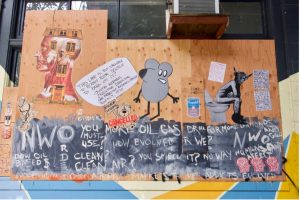 San Francisco is a fast growing, wealthy city, and many have been displaced over the past couple decades. For example, the number of African Americans in the city has declined from 13.4% in 1970 to six percent of the population. It is also arguably one of the most expensive cities in the country. People are considered low income if they make under $100,000 a year. Like so many other places, the gap between the uber-wealthy and the rest is growing. While the rich attend galas and the middle-class choose among different cultural institutions, increasing numbers live in tent camps on the sidewalks and carparks. Although liberal, it has its own share of prejudice, corruption, and contestation. Moreover, wealth, technology, and spiraling rents untethered to quality or location have shifted the demographics of the city and, arguably, its personality.

The artists who painted these and other plywood canvases invested their time, talents, and diverging perspectives with other San Franciscans. They addressed the struggles of Covid, expressed support and a sense of community, by, for example, portraying furloughed staff of local business and mourning those who were lost. They addressed racial discrimination and the horrific violence against African Americans that continues today. They expressed hope.

Street art during the mandate to shelter-in-place was a way to connect and defend against isolation. It was accessible and un-curated. It added to the more than 1,000 relatively more permanent murals in San Francisco. An essential part of the past and present landscapes of San Francisco, street art provides a window not just into a community, but into a moment in time. Dynamic and impermanent, conflict-ridden and celebrated, endorsed and debated, public art is also limited. Myopic. With cracks in the paint, ultimately faded by the sun, and repainted. 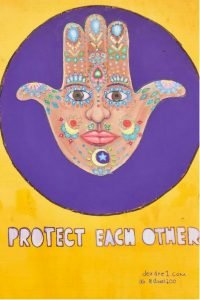 Images are compliments of Bill O’Such’s photography and generosity. See his work at pictorem.com/profile/Bill.Osuch and myviewsofparis.shutterfly.com

Keri Olsen has a Ph.D. in anthropology with a focus on South Asia. She lives in a rent-controlled apartment in San Francisco with her kids. Her son, Isaac, is a contributor to this issue.