Lawrence Salander is a poet and artist. He was born in 1949. He was the owner of the famous New York City art gallery Salander-O`Reilly Galleries. But he was imprisoned for grand larceny which he confessed to for reasons that have nothing to do with his guilt or innocence. In reality, he was imprisoned for standing in the way of rich people getting richer by standing up for his beliefs. However, because of how the criminal justice system works in the United States, one can only find him labeled as a criminal when he is not. And this is the state of American democracy today. He served over 6 years in prison. Some of his poems are published here under the title Hard Time. – Editor

Lawrence Salander is a painter and poet who currently resides in New York State. He was the owner of The Salander-O`Reilly Galleries in New York City for approximately forty years. During that time, he was responsible for presenting over six hundred museum quality art exhibitions to the public. He is a much published writer on the subjects of art and philosophy. His paintings have been the subject of many one-person exhibitions and have been included in many group exhibitions over his forty plus year career as an artist. Salander’s work is owned by a number of museums including The Smithsonian American Art Museum. Salander-O`Reilly was named best art gallery in the world by The Robb Report in 2003. The poems published here were for the most part conceived during his six plus year incarceration within The New York State Department of Corrections. In addition to his poems, Salander painted over 6,500 works while in prison.

Who among us has not experienced hard times? If you have not, then this collection of poems is not for you, except as a form of voyeurism. But for the rest of us these poems will resonant deeply as a fellow sufferer and survivor in this mysterious and sometimes unforgiving world.

There are hard times and there is Hard Time. This author has experienced both and with generosity of spirit has chosen to share with us his deep and personal thoughts on these brute aspects of life. As mere hard timers we can only imagine what Hard Time is like with the aid of these poems and reflections. Vicarious experience is not as vivid as lived experience, but with the gift of poetic language provided by our author coupled with our imaginations, provided by nature (or God, if you choose), our world can expand into plural lived lives. Seeing and feeling the world through the eyes of another is human empathy at its finest. Larry Salander opens up such a world for us to see and feel in exchange for a small investment of our time. We who value insight into the human condition would be unwise not to receive this gift with open arms and open minds.

A few excepts on these themes may entice you…

Existentialism:
I need to know what is on the other side
When the swirling stops and the vortex dies
And the maelstrom disappears… (The Lie).

No one is truly free when alive…. (The Lie).

One is reminded of Sartre’s pronouncement that “we are condemned to be free.” Do Salander and Sartre disagree? On some level yes, but not in the way that really matters. Freedom has many levels, and who knows how free we truly are in this life, but we can’t escape the responsibility that comes with apparent freedom. Even the incarcerated have freedom of thought. It was Viktor Frankl who observed that even a prisoner can “choose one’s attitude in any given set of circumstances, to choose one’s own way” in Man’s Search for Meaning. Frankl lost his freedom in another era and in different circumstances from Salander, but insights about life from both of them are too valuable to be ignored.

Frankl and Salander persisted during their Hard Time, and emerged with wisdom for us all. They returned to the outside world and continued the Sisyphean task of pushing their boulders with newfound meaning.

For what can we know of truth?
But to keep searching
Like Ahab his whale… (The Lie)

Attitude is what matters.

Loneliness:
But the sun never shines
Behind these walls… (To Beauty and Wicked Woe)

Loneliness too has it degrees. Who has not felt alone even when surrounded by others? But we usually have the option to seek solace in the company of those who understand us. Not so when confined and alone. These reflections of Salander awaken us to the glory of freedom and the ability we have to change our circumstances when lonely. Cherish that ability, he seems to say.

Loss and Regret:
Money will not buy my lassie back
Nor will it make her well
What is art in the face of life
When my daughter lives in hell? … (Joyce in Zurich)

A Sunken Place indeed. Those who have no regrets are rare…or dishonest. Did Sisyphus regret his offense to the gods? Most certainly he must have…but what now to do? The boulder is there to be pushed and to do otherwise is to give up all hope. Frankl experienced that lack of hope among his fellow prisoners…and no doubt so did Salander. But they both pushed through the adversity and created lives of meaning. And when the going gets tough, so should we, inspired by their experience and survival.

Social Commentary:
Twenty-four-seven news
Profits made in babies blood…
And as long as we permit
The good die young again… (Again)

You don’t need my comments on our social environment…just check in with the 24-7 set…and saturate yourself. Salander artfully expresses the dismay that many of us feel.

Hope:
For we can never know our destinations
Much less the way to get there
The air is filled with sounds of love
If only we would hear them… (To Beauty and Wicked Woe)

Salander has “entered here, but not given up hope” and neither should we who have not suffered the extremes of the Dante or the Salander journey.

I recommend this volume of wisdom and art. It will focus your thinking about the important things in life in a way that only an artist like Salander is capable of provoking. Read it and know that you are not alone, in your suffering nor your hope. 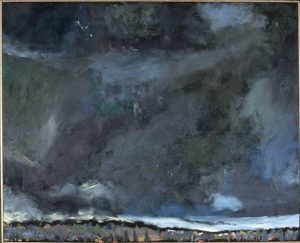 A carnival ride
Each life a work of fiction
For what can we know of truth?
But to keep searching
Like Ahab his whale
A convolution
An obsession unattainable
A fucking lie

To Beauty and Wicked Woe

And all ideas become our own
(Even the ones we steal)
When passed through our own hearts and souls honestly
Its only man who perverts man’s sanity
With his so called reason and vanity
Though every heart has its own desire
They share the language of love
Oh you young give up your need for explanation!
For all you will ever hear are lies anyway
The mystery is the thing
To love the journey flying blind
To be forever free

For we can never know our destinations
Much less the way to get there
The air is filled with sounds of love
If only we would hear them
But I fear the pain which comes with feeling
Or is it not feeling that I fear?
I think mostly of the used-to-be’s
And those things in which I trusted so
Are circled in black irony and wicked woe

The Dark Side of the Moon

The Edge of the World

Money will not buy my lassie back
Nor will it make her well
What is art in the face of life
When my daughter lives in hell?

Speaking of the Soul

And it’s looking very grim from where I sit

And I suppose I must wait to see
What it may bring
Why is it people seem to need
To hurt one another?

So take your math and shove it
I am speaking of the soul!
Nourish it if you have it still
Their technology will destroy

And they make you pay
To be exposed to their propaganda
In the movies
And on T.V.
In Florida
And in L.A.

And the jails are really filled
With the innocent
Some of whom have been a long time down
Some of whom sit on death row
Privacy is pirated
By the so called Patriots
When they tell you something is
You can bet that it is not
Like when they tell you the thirteenth is the fourteenth floor
When they say one plus one is two
Here is the point of this entire thing to wit:
No matter what the risk
Never stop questioning

But blood shed in violence
Will not just dry and disappear
It will have its retribution!
And the cycle never ends
I mean
This cycle of shit

Who can stand the murder of the children?
It is treachery that passes for the truth
In this society today

The Way it Is and Was