White gay men in gay spaces do not have to carve out or create a narrative to legitimize being in that space; they simply exist. Gay men of color are constantly unpacking the consequences of double rejection, the ostracization that comes from both their race and whitewashed gay spaces.

Gay male spaces are rooted in hierarchical structures based on race, class, and desirability politics. On a macro level, white gay men wield the most power; they dominate spaces by not only constructing, but also reinforcing structures of white supremacy that push gay men of color to the margins of gay society. Arguably, gay men of color must pander to Whiteness (the dominant cultural and infrastructural force that caters to white men) for the gatekeeping gates to finally open- but only a small crack. Only tokens can sit at their table.

In my own personal and professional life, I have seen how desirability politics have influenced the way gay, non-white bodies are treated based on their body type. To preface this discourse, all marginalized bodies are politicized, even those of white gay men. Politicized bodies represent more than just the individual’s aesthetic tastes; their body is a small, symbolic representation of all the identities they wield: class, race, ethnicity, and most ignored, body type. All these identities intermingle; they are variables that affect what the individual’s privileges and, for lack of language, detriments the individual will face.

Marginalized identities are multidimensional because they carry the historical context of their entire group. The black brute archetype for example: a tall, muscular black man that is oversexualized in animalistic objectivity to the point of making white men fearful that they will steal “their” women. In a gay context, the archetype remains; however, rather than bringing white men fear, it elicits intense fetishization. In white gay watering holes like clubs and bars, most men of color, especially South Asian men, are flat out stonewalled to the point of delirious anxiety.

When I first came onto the scene at the fledgling age of eighteen, I was starry eyed at the possibility of finding a community within the gay club scene. I was attending a small predominately white institution, which not only ignored (blatantly) my plight as a black man, but as a gay one as well. I have seen slithers of people from each respective identity receive clout from white spaces, but men who represent both must reduce themselves to jesters to receive jovial praise from their white mast- erm, allies. This self-conscious objectification is a byproduct of neoliberalism that will be explained later within the essay. For now, draw attention to my first time on the scene. To preface, there are no clubs are bars in my city that caters specifically to black, gay men – any gay man of color – for that matter. 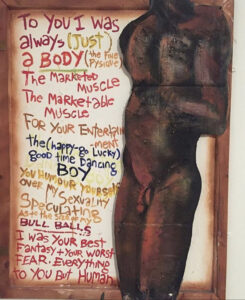 All gay men within the city’s vicinity have two spaces to claim, and one is only ours for once a week. The one club that is marketed specifically to the queer community has a mixed demographic, gay men and women (with a sprinkle of a few straights); it is about forty minutes away from my college, along the highway of a small town. The bar that has gay night is only a ten-minute drive from my college, right in the heart of the downtown area. The intimate layout of the bar is dominated by white men: there will mostly likely be a white man checking your ID once you are in, serving you drinks, and deciding what music you will listen to – aside from the occasional karaoke. The ecosystem explicitly indicates who is the ideal audience, and the patrons of the bar reinforce this ideal with an air of aloofness towards any people of color that dare infiltrate their space. The first time I went, this micro-aggressive dynamic struck a nerve within me: if I cannot find refuge within my school nor club scene, what other options do I have? There was a clear dichotomy in the white male’s gaze: they were either completely distant, never looking me in the eye while uttering the occasional one-word response, or they would gaze at me in the way a hyena leers at dying prey. The latter would rarely get close, if we chatted it would only be because we were in proximity or I initiated conversation. Otherwise, they would just stare across the room, a creepy trait that men do regardless of sexual orientation.

I often wonder about my exchanges in gay spaces, and the way my appearance influences the way men respond to me. Would this man still speak to me if I were fat, short, or darker skinned? Reckoning with conventional ideals of beauty, probably not. These limited (and quite frankly, flaccid) interactions left me feeling anxious and then finally empty. Was there something wrong with me? Was I too cold, to the point of rendering someone intimidated? Or more introspectively, was I not deserving enough to be in a space such as this? I would argue that there is no answer for either question, and, more importantly, these questions are rooted in imposter syndrome due to racial trauma. White gay men in gay spaces do not have to carve out or create a narrative to legitimize being in that space; they simply exist. Gay men of color are constantly unpacking the consequences of double rejection, the ostracization that comes from both their race and whitewashed gay spaces. From my own personal experiences, I received no insulation from this double ostracization, and my mental health paid the price for it.

Academic spaces operate more elusively because they are under the guise and pressure of neoliberalism. While there were men of color in the club/bar that only pursued white men, I found that there was a stronger intensity of pursuing whiteness within the confines of my school. I lived on a residential campus, so one’s social network was an indicator of one’s footing within the social hierarchy. Men of color in both spaces had to accept “there is no other choice:” white is the majority population thus making them the most feasible dating option. This claim is legitimate, but I still seek to raise the question: does one have to cater to whiteness in order to be seen and embraced by white men? Liberal arts academia has an ironic way of making the answer yes.

The word ‘diversity’ within neoliberal spaces has become quite the buzz word. In the context of identity politics, it aims to democratize the representation of all persons and repackage them as marketable entities. There are three problems with this model. One, America has yet to acknowledge – let alone deal with – the systematic inequality that is racism, and thus, we can never have an authentic depiction of all racial groups in America and how they interact with each other. Two, marginalized groups are not given the autonomy to write their own stories; queer persons are not constructing their own identity, black people do not have a seat at the table in deciding what is and is not a Black identifier. I again emphasize that these depictions do not live in a vacuum; stifled, two-dimensional representations of disenfranchised persons influence the way they view themselves, treat each other, and how they are tolerated by Whiteness.

The final problem with neoliberal identity politics is the notion that all identities are up for consumption as a learning experience. Rarely is it a fair, equally profitable relationship where the teaching identity gains as much as the student identity. This dynamic is especially hazardous because the student identity is often a dominant one. White people infiltrate Black spaces to consume and later appropriate the je ne sais quoi, while straight people breach queer spaces to plunder the slang and dances. Rarely are these looted groups compensated or given the same uninhibited energy when trying to enter white dominated spaces.

Universities, as a business, condense kaleidoscopic representations of marginalized identities and repackage them as diluted palettes for white students to paint their reality with. They take the darkest hues – trauma, rejection, violence – and sensationalize them, as a narcissistic attempt to add color into their own lives. Next, they play with lighter hues – benevolence, culture, resilience – to appease their inner white fragility; surely, they cannot be racist if they digest some notions of non-white culture. Rather than find an equilibrium between both, most oversaturate their reality with the lighter hues. They are easier on the eyes. Marginalized identities on the social incline are aware of this, they put on their most glaringly amiable face. It is the kind of empty, fake smile that resembles a snarl if you stare long enough; a smile that raises the question – are they trying to be extra friendly, or are they fearful and signaling the need for rescue? I empathize with them; it is hubris to not acknowledge how everyone in a neoliberal society does whatever it takes for societal mobility within their own confines of morality. Just as we all have our own sense of morality, we all have a variation of this question that we will ask ourselves at one point in our lives: Is what I am doing to secure my place in social ascension worth it?

Drew Davis is a college student majoring in religion at Furman University.