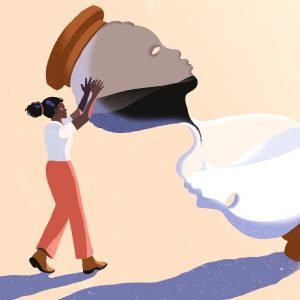 It is true that race and ethnicity are real lived experiences and that differences among and between people are experienced in bodies, histories, politics, and psychologies. It is also true that such differences are connected to practices of discrimination, bias, and oppression (racism). The problem is that many (if not most) people assume they know why and how people differ and that such differences are 1) best represented as “race” or “ethnicity” and that 2) they originate from deep histories of divisions of humanity rooted in biology. But this is wrong.

Race and racism, ethnocentrism and bias, and a multitude of other serious problems face humanity today. There is a quite a lot of talk about these topics recently, including many important critiques of racism, bias, and structures of violence and discrimination. However, these discussions, while well intentioned, often suffer because so many people assume that the underlying differences between groups, be they races or ethnicities, are more rooted in biology, more “natural,” and more absolute than they actually are. So even when many argue for justice, if they still believe that racial and ethnic differences are built into our DNA, despite all good intentions they will not be able to achieve the most beneficial, equitable, and compassionate outcomes. The COVID-19 landscape brings this into horrendous clarity. The dramatic inequality of infection, suffering, and death along racial and economic lines illustrates perfectly how real race and bias are and the reactions by many commentators assuming genetic or other biological predisposition of black and brown bodies to infection illustrate how the erroneous assumptions about a biology of difference are often invoked in support of such outcomes. However, we know, without a doubt, that patterned differences in DNA and biological histories are not the cause of these horrible inequalities in harm due to COVID-19. Black and Brown people in the UK and USA are suffering from SARS-CoV-2 infection inordinately not because of their race or some biology of difference, but rather because of the outcomes and processes of racist systems of health, economics, and infrastructure that permeate societies. In the case of COVID-19, as in so many other cases of harm, race is not the problem, racism is.

So to combat racism, and its horrible outcomes, we must first dispel the myths of a biology of race.

The American Association of Physical Anthropologists is the world’s largest organization of scholars who study human biology, human evolution, and human variation. The following is a section of their most recent statement on race and racism, which is based on thousands of studies across decades into how and why humans vary.

Race does not provide an accurate representation of human biological variation. It was never accurate in the past, and it remains inaccurate when referencing contemporary human populations. Humans are not divided biologically into distinct continental types or racial genetic clusters. Instead, the Western concept of race must be understood as a classification system that emerged from, and in support of, European colonialism, oppression, and discrimination. It thus does not have its roots in biological reality, but in policies of discrimination. Because of that, over the last five centuries, race has become a social reality that structures societies and how we experience the world. In this regard, race is real, as is racism, and both have real biological consequences.

Humans share the vast majority (99.9%) of our DNA in common. Individuals nevertheless exhibit substantial genetic and phenotypic variability. Genome/environment interactions, local and regional biological changes through time, and genetic exchange among populations have produced the biological diversity we see in humans today. Notably, variants are not distributed across our species in a manner that maps clearly onto socially-recognized racial groups. This is true even for aspects of human variation that we frequently emphasize in discussions of race, such as facial features, skin color and hair type. No group of people is, or ever has been, biologically homogeneous or “pure.” Furthermore, human populations are not — and never have been — biologically discrete, truly isolated, or fixed.

While race does not accurately represent the patterns of human biological diversity, an abundance of scientific research demonstrates that racism, prejudice against someone because of their race and a belief in the inherent superiority and inferiority of different racial groups, affects our biology, health, and well-being. This means that race, while not a scientifically accurate biological concept, can have important biological consequences because of the effects of racism. The belief in races as a natural aspect of human biology and the institutional and structural inequities (racism) that have emerged in tandem with such beliefs in European colonial contexts are among the most damaging elements in human societies.

Contemporary understanding of genomics, evolutionary theory, and human evolution disprove racist and racialized arguments and assertions. A deep and holistic understanding of how biological processes function, combined with an accurate description of how human DNA sequence variation is distributed across our species, in concert with the deep knowledge of human evolutionary histories refutes racist assertions about human variation and capacities. Data from genomics and human evolution in the context of contemporary evolutionary theory falsify racialized assertions about a causal role of “genes” in complex human social outcomes and refute assertions of continental or Black/White/Asian groupings as reflecting biologically meaningful, or evolutionarily derived, distributions of human genetic variation. Simultaneously, an accurate engagement with contemporary biology rejects simplistic scenarios offered by racist scholars hoping to reduce (and justify) complex social, economic, and political histories of oppression and discrimination into deterministic, and fixed, outcomes of natural processes. In short, race is real, but it does not come from biology. However, racism does have biological (health) effects.

So, why then do we believe so deeply that the divisions of humans into races and ethnicities is “natural” and biological? Humans are biased in how we interpret information. Our physiological abilities (hearing, sight, olfaction, etc.) vary across people, but it’s our cognitive interpretations of these senses that act as the biasing filter. We develop our cognitive filter in the process of learning how to be a member of a society, and it affects our whole lives. Social scientists call this enculturation and development. And it creates implicit biases.

Implicit biases are part of human implicit social cognition – those thoughts and feelings that are outside of conscious awareness and control. What we think of as “normal,” what we consider intuitive knowledge and common sense, rarely emerges from some inner truth-telling core. More likely we’re drawing from our personal life experiences, the social milieu we grow up in, and the way in which these contexts interact with, shape, and influence us.

Race, and racism, is part of the environment, history, language, psychology, and politics in most societies. Humans see and learn that differences are there, and what those differences mean in a particular social and historical context. Thus, we see the world in that vein. But we don’t have to. If we understand why and how humans vary, and what it means and does not mean, then we are in a better place to ask and answer questions about racism and bias. Removing “race as biology” as a core explanation for differential outcomes in social, economic and health challenges is critical to being able to tackle the even more complex tangle of the social, psychological, and political reasons for why we “see” such differences as so deeply ingrained. For example, starting with the knowledge that “race as biology” is not a possible explanation for differential outcomes, we can more effectively ask: Why do Black and Brown peoples suffer disproportionately in the COVID-19 crisis in the UK and USA? Why do ethnic minorities suffer higher levels of homicide, unemployment, and overcrowding compared to Whites in the UK? The answers we will encounter are not tied to some inherent nature of “race” or “ethnicity,” but rather to the patterns and processes of racism and bias. Cultures of discrimination and oppression, and deep histories of the belief that some humans are so deeply biologically different from others that they are worth less, are part of both colonial histories and contemporary realities. These cultural assumptions and explanations need to be constantly and loudly revealed as the falsehoods that they are in order to effectively remediate the damage done by racism and discrimination.

Knowledge is power. If we know (as we do) that innate biologies, deep linages of purity and distinction, are not the explanation of differences between South Asians, Northern Europeans, West Africans, and indigenous Americans (for example), then we are left looking to the social, historical, economic, and political to explain why the inequalities that we see and feel all around us manifest themselves in visceral, lived outcomes. As noted above, humans vary biologically (a lot), but those variations are not what we think they are, and those variations do not create race or ethnicity.  Racism, bias, and oppression give us negative outcomes of all sorts. But racism and bias are neither inevitable nor fixed; inequality is not a given. Things can change. Racism is the problem. A problem we can combat though education, reflection, conversation, and action.

Agustín Fuentes is a Professor of Anthropology at Princeton University. His current explorations include the roles of creativity and belief in human evolution, multispecies anthropology, and the structures of race and racism. Fuentes’ books include “Race, Monogamy, and other lies they told you: busting myths about human nature” (U of California), “Conversations on Human Nature(s)” (Routledge), “The Creative Spark: how imagination made humans exceptional” (Dutton), and “Why We Believe: evolution and the human way of being” (Yale).