When I was born, I brought the family together.
A grandmother and her husband, who had disowned
My mother, who had taken up and married
An alcoholic father, who had left another family behind and would be left behind in turn.

I was cut from a hostile organic womb and encased within a hostile artificial one.

A slate of innocence from which acts of subversive resistance would later sprout
As hair darkened, eyes dulled, matter remoulded, reconfigurations unfold.

The first child, the first grandchild
New life, hope, reconciliation; I brought family together again in hospital corridors for a brief time
Years later, I would tear it apart; by being nothing more and nothing less than me.

Echoes of memories scream to me as loudly as I screamed my way into and through this world
“I wish you had died when you tried to kill yourself”
“Is transitioning more important or would you rather keep a roof over your head?”
Glasses dislodged from my face whilst redness erupts
Demands for my lips, my hands, my hips
Gasping for breath as I lay in puddles of sick
Too big, too loud, too present, too absent, too masculine, too feminine.
Too much, for you.

Halt, for I am becoming.

On the 18th December 2020, I journeyed across an eerily quiet London for a tattoo appointment at Velvet Underground Tattoo, London’s first studio comprised of all female tattoo artists. Though the piece I was going to get had been brewing for almost 10 years, the timing for it had never been right due to ongoing unstable housing, finances, and other personal circumstances. As I lay on the chair that afternoon staring up at the ceiling with the sound of constant buzzing and loud rock music filling my ears, an industrial fan blowing on me kept my body from overheating; I knew that the timing could not be more perfect. On the evening that I sat down to write this, those same eerily empty streets of London were filled with the grief and rage of women collectively mourning the murder of Sarah Everard at the hands of a male police officer as she walked home alone. I knew that tonight would be the right time to share these words with you.

Just a few months prior to my tattoo appointment, I had a sudden and traumatic end to my relationship of five years and relationship with the other partner in our triad. In the space of a couple of days, I found myself going from two relationships, stable housing, and finances into a complete mental health crisis. I had to find a new house to move into, that was both trans-friendly and dog-friendly, in the middle of a pandemic. I had to divert the last of my money and savings into paying rent and crowdfund additional money to help me move. I was struggling to adapt to a new life without my partners, one of whom was my caregiver, at a time when I couldn’t physically see my friends. I was working hard to maintain my wellbeing through therapy, a 12-step programme, and virtual support from close friends. And I was taking my first tentative steps towards healing from over a two decades of emotional, physical, and sexual violence.

The circumstances of Covid-19 and the ending of these relationships had meant that I could withdraw from touch entirely, something that I had never been able to do. I had spent my life being subjected to touch by others who felt entitled to my body in one way or another, who transgressed my bodily boundaries to make their mark on me. Friends, family, partners, strangers, colleagues, employers, medical professionals, institutions, the government. Sometimes it was as seemingly innocuous as a group of well-intentioned friends piling on me for a hug, a friendly handshake from a colleague, a routine medical examination at the doctors. Other times it was more deliberately invasive, more actively dominating: the stinging slap of an angry parent; the pressured expectation of reciprocation from interested parties; the quiet, creeping hands of a partner letting themselves in. Whether well-intentioned or not, it felt like everyone wanted a piece of me and a ‘no’ was never heard.

The decision to get a tattoo at that exact moment in December therefore felt immensely powerful and healing.

Tattoos are often described as subversive; they can be seen as disruptive, insurgent, rebellious. Many of us have heard stories or experienced first-hand the judgement from others over tattoos. The comments of regret, lack of morality, disrespect, and unprofessionalism. The disapproving looks and the hands which grab our bodies without permission to satisfy their own curiosity. Being tattooed in an all-female studio felt like a defiant act of subversion in a male world that tried to control and lay claim to my body without my consent. As I lay back on the chair, gritting my teeth through the pain as the design that I had co-created with a talented artist was being permanently etched into my skin, I felt her gloved hands brushing over my skin and wanted to cry. Not because it hurt, but because it didn’t.

During the tattooing process, my artist kept suggesting that I keep myself occupied by watching something on my phone or reading a book. Despite the session being four hours long, I resisted these suggestions, instead choosing to sit with the feelings that flowed through me and watch as the intricately sprawling lines inked their way through my skin. The tattoo itself is a custom piece of a black yew tree surrounded by falling golden lights and, currently, stands incomplete at the top of my first tattoo, a messily done quote from The Perks of Being a Wallflower by Stephan Chbosky (1999). Although I had first envisioned a tree making its home here almost 10 years’ ago, it wasn’t until a few months before December 2020 when the final idea solidified in my mind. My idea for the tree combined the yew tree in the illustrated version of A Monster Calls written by Patrick Ness and illustrated by Jim Kay (2012), and the golden nebula surrounding the Tree of Life in Darren Aronofsky’s The Fountain (2006). 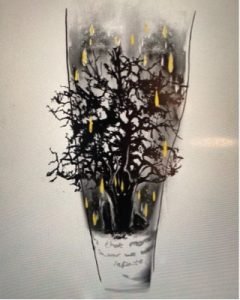 Aesthetically speaking the trees in both A Monster Calls and The Fountain are incredibly striking and become even more so in the tattoo design created by artist Vivi Ink. In A Monster Calls Jim Kay’s stunning black and white style lends a devastatingly haunting nature to the yew tree which stands vigil at the end of the young protagonist Conor’s garden and comes a-walking as the monster to guide Conor through the impending death of his mum. Though of a much different style, the Tree of Life in The Fountain is equally iconic: a grand, twisted, white tree encased within a transparent biosphere, surrounded by golden light as it, and the film’s protagonist “Tom”, travel through the nebula on their way to reach a dying star which Tom hopes will restore his dying wife. The trees in both stories represent the main character’s struggles with the death of a loved one, in these instances a mother and a wife slowly dying from cancer, and deal with themes of grief, anger, loss, acceptance, healing, hope, and resurrection; of coming back to life. Though my life has been hard and, at times, almost consumed me in its suffocating darkness, I am continually reborn and enveloped within collective love and light. Although the process of healing from loss and trauma is painful and seemingly never ending, like the process of being tattooed I knew that I would survive and be left with something utterly beautiful at the end.

A few days after the first session, a few days into my skin healing from its own kind of trauma, I revealed what the session had meant to me via text. The text read:

“Thank you so much for being so caring and gentle with me. I wanted to say before but felt a bit awkward, I separated from an abusive relationship 5 months ago and hadn’t allowed anyone to touch me since then (also bc of covid) so having this session was a really huge deal for me. Thanks so much for making this such a positive experience. CRYING OVER HOW GOOD IT LOOKS and can’t wait to get it finished in the new year.”

Though it was only a short message, it had been hard to write and even harder to send. It was one of my first disclosures outside of my close friendship group and support networks. This message, the act of being tattooed by a female artist, and the tattoo itself would become hugely profound moments for me in my journey of healing from trauma and reclaiming bodily autonomy. Though I didn’t hold the needle, the process from start to finish was full of choices I could make for myself. The decision to get a tattoo that would live on my skin for my entire life, the decision to trust my fleshy canvas to someone else who would take things at my own pace and in a way that was right for me.

I opened this article talking about the importance of time not only in getting this tattoo but also in writing this piece. Both have been incredibly cathartic experiences which have helped me to heal from various traumas and given me the strength to speak up about them. As my time with this article draws to a close, it seems strangely fitting that tattoo shops in London will be reopening in just a few days and I will be returning to The Velvet Underground to get my tattoo completed. This reopening doesn’t just come at the end of this article, but almost exactly at the 1-year anniversary of my birthday and the beginning of the end of my previous relationship. When I return to the chair for the final session of this tattoo, it will be a time of many endings – of hosting an incomplete tattoo, (hopefully) of the lockdown here in London, of this article, of previous relationships – but it is also a time of many new beginnings. My tattoo is healing, and so am I.

I allowed someone who wasn’t a doctor or a massage therapist or a tattoo artist to touch me
No, not just allowed
I invited; I welcomed them

I invited them in.

This time, though my skin would

It would be entirely: as requested, in ways expected,
my body: wholly respected. 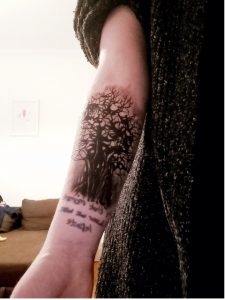 Chbosky, Stephen. 1999. Perks of Being a Wallflower. Simon & Schuster.

Avery Delany is a PhD student in the Department of Anthropology at Goldsmiths University. Their thesis focuses on co-constructions of human/non-humanness and imaginaries of the future in single-player, science fiction video games. They are a co-director for the London Science Fiction Research Community, member of the Beyond gender collective, and on the editorial board for Decol Anth @ Gold.