21 March is Human Rights Day in South Africa. All over the country, different events took place discussing Women Rights, Children, LGBTQI as well as ‘the past’. What has been achieved and what should still be done?

24 years after the end of Apartheid, South Africa has come a long way. And even if it seems part of the past, it’s hurtful to walk around the Constitution Hill and the Apartheid Museum. And as an African, you cannot ignore the pain and all violations people faced denied of their liberty and dignity.

Apartheid was specific to South Africa, however, in a global way, Africa suffered from colonization. The principles and the consequences of those two are quite similar. Today, with the release of “Black Panther”, a lot of people talked about “what if colonization hadn’t happen?” During a screening of the movie, in Cape Town, when Shuri called the white man « Colonizer », the whole audience laughed. This laugh says a lot.

Beyond the pain and sometimes the anger, we should remember that Africa is much more than those images usually used to depict the continent show: uncivilized, wild, poor. Western people came to Africa and to other parts of the world, with that attitude, that complex of superiority, and thought that simply because of the color of their skin, they should be respected; but they could not respect others, even those who welcomed them in their land.

One principle of Human Rights is Dignity, and colonization denied it to people, based on their race. As Nelson Mandela mentioned about their conditions at prison, they were treated like animals. Another principle is Universality. But universality doesn’t mean conformity. And then there is one last point that they seem to have forgotten during the 19th century: RESPECT. Respect other’s choice. Respect the life of all human beings. Respect Diversity.

When white people came to Africa, they imposed their view, their way of life, etc. Colonization is not only economic as mentioned by the Oxford dictionary: “The action or process of settling among and establishing control over the indigenous people of an area”, it also affects peoples’ culture. 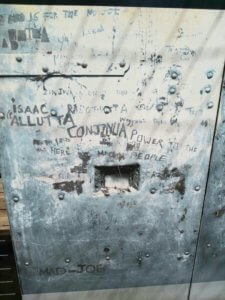 One topic, which created confusion and has been used as a tool to colonize African countries, is religion. In the 18th century, when the Englishmen arrived in Madagascar, they sent missionaries to build schools. And they used those schools to preach their religion. Even though the King of Merina, Radama I, agreed on the school’s benefits, he never embraced Christianity, as mentioned in “Raombana, l’historien” (Simon Ayache, 1976).

Malagasy had their own traditions and beliefs. They already believed in one god, named “Zanahary”. They didn’t have constructed temples since they prayed to this divinity through natural resources such as stones and trees, and they were superstitious. With the arrival of missionaries, Malagasy could make the choice to follow or not the English church. And then came colonization, and Christianity became an “obligation”. To be civilized, Malagasy had to change their religion. Religion became a criteria of development. Traditional practices were prohibited and the African cultural diversity was denied. So Malagasy started to avoid those practices and follow “white” religion but not with total conviction. All this created confusion within the Malagasy society of the 19th century. “He calls himself a Christian, sincerely … but he refuses to be stuck in a dogma, and more in the rites of a mass; he rejects even certain aspects of Christian morality. In truth, he does not deny all the customs of his ancestors; he believes in Jesus Christ, but he conceives divinity as deist[1]”.

There is an important side effect to this as well: undermining traditional beliefs and values creates an identity loss. How could you grow up being proud of your identity when your roots are depicted as inferior and primitive? How could you be comfortable when you don’t really know what you should believe in and which path you should follow? In Madagascar, some people continue to both pray to Jesus Christ and ask Zanahary’s blessing before their wedding ceremony.

Article 18 of the UDHR says: “Everyone has the right to freedom of thought, conscience and religion; this includes freedom to change his religion or belief.” The word “Freedom” is decisive. It is a choice that should be done with total conscious and not because of any threat of repression.

Back to “Black Panther” and its women army. The whole world discovers these amazons, which were inspired by the Women Soldiers of Dahomey. In the 18th and the 19th centuries, this army contributed to the military power of the Kingdom of Dahomey (Benin). Different legends talk about them, the amazon, including the theory that they were against men power. But according to Cheick Anta Diop, the Women Soldiers of Dahomey did not have this “Amazon” vision: “Men hatred was not part of them. They have the conscience of soldiers struggling for the liberation of their country.” In the movie, you can find this spirit. They were loyal to the King, whether it was T’Challa or Killmonger. They were there to protect and defend Wakanda.

Talking about women, in the past, they were the pillar of society. As mentioned by Cheick Anta Diop in his book “L’unité Culturelle de l’Afrique noire”: “It shows from this presentation that the matriarchal system is general in Africa, either in Antiquity or today, and this cultural aspect does not come from an ignorance of the father’s role in the conception of the child.”

He also gives more details about it: “Matriarchy is not the absolute and cynical triumph of woman over man; it is a harmonious dualism, an association agreed by both sexes to build a better sedentary society where each one feel fulfilled by participating in activity according to their physiological nature. A matriarchal system, is not imposed to man by circumstances beyond his control, it is agreed and even defended by him.”

Unfortunately, this concept and the glorious place of women seems a utopia today. The collaboration and complementarity described by Cheick Anta Diop seems ignored by the young generation. And in the 21st century, in Africa, women’s lives are undermined and women themselves are still struggling with their rights in some countries due to this new patriarchal view. This change in view was, once again, due to external factors. “With Islamisation, which mean under the influence of an external factor, and not by internal evolution, most of the populations in the Middle Ages, who were matrilineal became patrilineal, at least in appearance[2].”

Before, not all African societies were matriarchal and difference was respected. With time, after the Arab invasion and colonization, patriarchal societies became common practice across the whole continent. Once again, the disrespect for other’s values and practices destroyed the African system and its cultural diversity.

Today, only few people are aware of those facts. In Africa, oral tradition is predominant. History has passed through generations by storytelling. Unfortunately, it is not a sustainable way. Only written words remain, and most of the ancient books were written by Westerners, giving biased points of view. For that reason, Raombana, secretary of the Merina monarchy, decided to write down his own perspective of history: “For instance, from the Malagasy point of view, the huge work of the missionaries during the first half of the 18th century, has less impact than mentioned by European authors[3].”

The importance of History and of all different points of view should be respected. We cannot talk about Human Rights without thinking of Respect. And Respect guarantees diversity.

Ahmedur Rashid Chowdhury, known as Tutul, is a publisher, writer, and editor from Bangladesh.