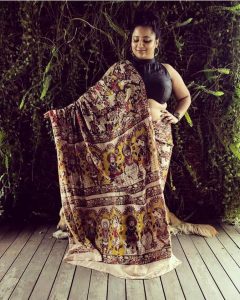 My paternal grandmother, my Dadi, Ruby used to paint saris. She would buy yards of beautiful, hand woven-cotton, pencil a design at the border, and get to work painting the cloth using stiff, acrylic paint. It wasn’t easy locating proper fabric paint in commercial stores in Dhaka, Bangladesh at the time – still isn’t all that easy now – but she made do with what she had. This is the unbreakable Bengali spirit: to make something beautiful with whatever you have at hand. I would watch as she painted these colourful patterns with her long, slender fingers. Sometimes she’d let me help, but I was never good at painting inside the lines, so I definitely wasn’t a favourite helper for my perfectionist grandmother. These finished saris would then be given as gifts to family members. Long after she left us, we cherish these saris that her hands lovingly painted, and I cherish the memory of spending time with the beloved Dadi I miss terribly.

From the silver screens of Bollywood, red-carpet affairs, and high-fashion runways to city streets, rural farmlands, and even at the beach in Bangladesh’s Cox’s Bazaar, saris can be seen everywhere. It is the common thread that binds generations of South Asians such as our conservative grandmothers and us modern millennials in the diaspora, firmly grasping onto threads of our tradition in a western world.

The history of the sari can be traced back to records from the Indus Valley Civilization period (2500 – 1700 B.C.E) with mentions of it in the Vedas – one of the oldest forms of literature – making this garment one of the earliest known forms of clothing worn. The Rig Veda, a book of hymns dating back to 3000 B.C.E, has some of the first mentions of the sari (in chapter 10 of the hymn named “Devi Sukta,” which is the assertion that the feminine is the supreme principle behind all the cosmos). Furthermore, similar draped garments also appear in Indian sculptures dating back from the first to sixth centuries C.E.

In ancient Indian and Buddhist texts appears the Sanskrit word ‘Sati’ meaning ‘strip of cloth.’ It is a garment believed to have evolved from the ‘Sattika’ – a Sanskrit word meaning women’s attire. A Sattika was a three-piece ensemble consisting of the Antriya, a lower garment, the Uttariya, a veil worn over the shoulder and the head, and the Stanapatta, a chest band. The one-piece sari worn today is the modern innovation combining the multiple garments of its predecessor and shows the ability of this traditional garb to withstand the test of time.

The sari evolved drastically during the 19th and 20th Century when India, including the Greater Bengal, was under British rule and Victorian modesty rules saw the rise in popularity of blouses and petticoats being added to the garment. The story goes that Jnanadanandini Debi, the wife of Satyendranath Tagore (brother of the famous Bengali poet Rabindranath Tagore), was denied entry to British Raj clubs because she wore only a sari over her bare breasts.   As a result, she was encouraged by her husband to adopt western ideas. She then went on to popularize the use of blouses, jackets, chemises, and petticoats under a sari, which brought about the modern styles of today.

Throughout history, the sari has developed from being just a garment worn for comfort and modesty to being a symbol of South Asian culture and identity as well as an ambassador of traditional South Asian craftsmanship and design.

This sari not only connects us to our roots; it also creates a connection between the weaver and the wearer. Donning a sari could be seen as a collaborative performance with the weaver creating the garment, and the wearer draping and assembling it. There are believed to be over a hundred traditional ways to drape a sari, which the wearer can be inspired by, making the drape itself a form of self-expression.

Traditionally, the sari itself should never be cut or stitched; it is supposed to come off the loom ready to be worn and to represent purity and unity. Further, the intricate motifs and designs of a sari can themselves be interpreted as forms of fine art with the local lore, influences, and culture of each of its regions woven into the delicate fabric.

From the Kanchipuram region of Tamil Nadu comes the famous Kanjeevaram sari woven with heavy mulberry silk and precious gold and silver threads, known as zari. The borders of a Kanjeevaram sari are inspired by the beautiful temples of South India, and the designs within the sari are inspired by the scriptures and images within. Even the abundant natural beauty of South Indian flora and fauna finds its way into the weaves of the sari. The Kanjeevaram is reserved for special occasions such as weddings so the wearer can be enveloped with temples and auspicious religious influences during their special day.

Then you have the Jamdani of Dhaka, a sari once woven with the finest Muslin threads grown by the Shitalakha river before the British empire cruelly destroyed the Muslin trade in Bengal. Thankfully, Jamdani saris are still produced and widely favoured, and research and effort are being put into reviving the quality of muslin as it was once known to be woven. The exquisite geometric floral patterns of a Jamdani are best viewed as a collaboration of Mughal era Muslim art influence in Bengal amalgamated with its rich and diverse ecological beauty. These handwoven designs means that it takes a weaver months of painstaking work to create one garment; the more intricate the weave, the more time it will take to finish a sari. Such is the reason Jamdanis were once only available to the aristocracy and loved by the grand Mughals – especially Emperor Jahangir who was a notable fan of this cloth. 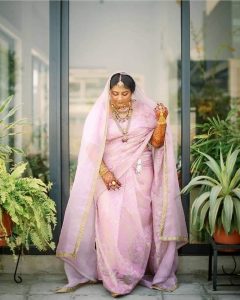 Another example of sari as a form of public art is the Madhubani sari of Bihar, originating in the Mithila region. These paintings are mostly done by women using any number of tools they have available to them such as twigs, matchsticks, bamboo brushes, or even just their fingers. Inspired by folk art, these saris have intricate geometric borders, and in the main body of the garment there is a story depicted, which is usually inspired by religious tales or an auspicious day honouring a particular deity.

Embedded in the heart of Odisha’s culture is the poem Gitagobinda by poet Jayadeva, which is the inspiration behind the Khandua – a sari woven or dyed with verses of the poem. According to legend, Jayadeva wanted to offer his poem to the deity Jagannath, and so he had it woven into fabric and presented to the God so it can be worn close to the body. Even now, the Khandua weavers must maintain purity by following strict vegetarian diets and certain ritual practises.

Along the banks of the river Ganges in the ancient city of Varanasi is created perhaps one of the finest silk saris in the world: the iconic Banarasee. Handwoven silk shot through with gold and silver zari motifs inspired by mangoes, betel leaves, jasmines, birds, and even people, these jewel-toned saris are an integral part of a South Asian bride’s trousseau.

Even the waters of rivers flowing through villages and regions influence sari designs and techniques such as the beautiful Maheswari silk sari, which is inspired by the golden sunlight glittering on the Narmada river, or the Lahariya striped saris from the Thar desert of Rajasthan. Legend says the Lahariya sari was meant to invite rain and create hope for an abundance of water in the dry desert regions.

The sari is meant to be a staple garment worn for any activity from working the fields to attending special events. You can even see the underpaid women working in construction in Bangladesh, donning them on the job sites. The versatility of the garment is what has kept it popular amongst the generations of South Asians. Not only can it be yards of unstitched blank canvas for the individual to display their creativity – like my Dadi and her paints – but it can also be bought to showcase the talents of the weavers and draped in over a hundred ways. This diversity makes the sari a garment that can be worn for many occasions – from elegant evening wear to a more relaxed and informal outfit – giving us a chance to turn our bodies into works of art in everyday situations.

Each country of the South Asian subcontinent – India, Bangladesh, Nepal, Sri Lanka, Pakistan – also has their own unique sari style, weave, and texture that exemplifies the diversity of this vast region and shows the heterogeneity of our cultures. The Jamdani of Dhaka, the Benarasi of Uttar Pradesh, the silks of Bihar and Karnataka, and the Ikkad and Khandua from Odisha, to name a few: the sari weaves our people together long after colonisation tore us apart, transcending class, religion, and socio-political divisions. 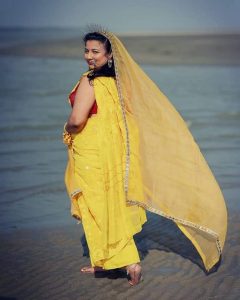 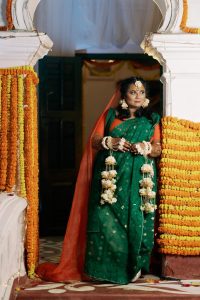 Musarrat Rahman is a Bangladeshi multidisciplinary creative based in London. From Dhaka, Bangladesh, she is constantly inspired by the chaos, colours, and unique style of urban cities. She is passionate about working with traditional craftsmen and sustainable textiles to highlight the raw talent in Bangladeshi artisans interpreted in a modern context and marrying the best of traditional craftsmanship with innovative technologies.