“Language is power, and I see this as a change in the positive direction.”

It is late spring in Nepal’s capital Kathmandu—the skies are overcast, unusual for that time of the year. A thick grey haze envelops the city. The wind is warm, the heat is dry. April is the start of the tourist season in Nepal—the cafes in Yala Laaykoo, also known as the Patan Durbar Square, one of the three medieval palace squares in the Nepa Valley (Kathmandu), are packed with tourists. This world heritage site is what Rukshana Kapali, 21, calls home. 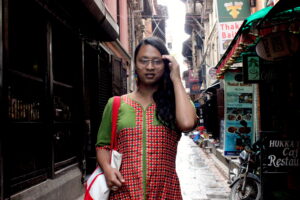 Rukshana is tall and wears her long hair down. As she walks the narrow gallis of Yala, she stops to greet her neighbours, and the local shopkeepers and continues to walk briskly, and with confidence. “This is my safety, this is my home, I can walk these streets on a blindfold and can still get to where I want to,” she says with a laugh as she finds a café in the square. We climb the narrow dark stairs until it opens up to the seating area—a room with big windows. The view is breath-taking—we can see the entire expanse of the 17th-century Malla palace. The Shikhara architecture of the Krishna Dega (Krishna Temple) infused with the pagoda style of the Malla palaces.

“This square has seen a lot its lifetime,” says Rukshana. Outside the wide windows, the remnants of the 2015 earthquakes that devastated Nepal are living proof of that fact. As we settle down this mid-afternoon, the mason women continue to lay bricks as a part of earthquake restoration work, temple bells ring from Krishna Dega, and the shopkeepers close for their afternoon kip. We settle down by the square Rukshana’s ancestors called home and she talks about her fight for inclusion and identity.

Rukshana came out as a trans woman to friends and family when she was 15-years old, but could not do the same officially. When she turned 16, it was time to apply for the citizenship card. Nepal’s 2006 Citizenship Act entitles Nepalis who are 16-years old to apply for a citizenship card. This citizenship certification is the fundamental legal document, which forms the basis for other identification papers. Without citizenship documents Nepalis cannot apply for voter registration, passport, driving license, register birth, open bank accounts or even purchase a mobile SIM card.

“Nepal’s law is rigid when it comes to what someone’s name can be on the citizenship paper,” she says. When a child is born in Nepal, their birth is registered at the local government office. The details from the birth registration are used during school admissions, and in government-administered exams at grades 8, 10 and 12. For the citizenship application, the state requires the applicant to submit these papers where all the details match. “I started the process with a fearful heart,” says Rukshana, “The law is not clear on this issue, so I was able to place the name that I wanted ‘Rukshana Kapali’ but had to choose the gender marker ‘O’ (Other).

In Nepal’s Supreme Court 2007 decision, Pant v. Nepal, the court ordered the government to legally recognize a ‘third gender’ category, review laws that discriminate against LGBTI people and form a committee to study the legal recognition of the same-sex relationship. In 2010, Nepal’s Election Commission added a third gender option to voter registration/cards. Immigration forms changed—the option ‘O’ (Other) was added to ‘M’ (Male) and ‘F’ (Female). A year later, Nepal included the ‘third gender’ option on the census. In 2015, the country also started issuing passports with the three gender markers.

After high-school Rukshana applied to study linguistics, but she could not register. “In Nepal’s academic institutions, the secondary level national examination certification, known as the School Leaving Certificate (SLC), is extremely important,” says Rukshana. At Nepal’s Tribhuvan University the officials told her she could not officially apply to study because her SLC name, gender marker, and appearance is different from the name, gender, and appearance on her citizenship documents. In April 2019, when we met, Rukshana was in the middle of a long struggle with the University to get herself registered in their undergraduate linguistics program. “They would not accept my registration because I am a trans person,” she says.

“What kind of a system is this? They are denying me my basic right to education,” says Rukshana. But she did not give up. Rukshana went to her local ward office and got a letter of recommendation that states the person on the SLC certificate is the same as the one on the citizenship documents. “This is how the current legal provision works for every Nepali citizen who has a different name in different documents.” Despite the necessary paperwork, the university continues to refuse to register her. “I went to the registrar who denied my proof and application and said that they don’t have a provision to admit people with the ‘O’ gender marker,” says Rukshana. “The irony that one wing of the government issues this documentation, while the other rejects it so violently, essentially denying me the fundamental right to education enshrined in the constitution of Nepal, is not lost to me,” says Rukshana.

While recognition of the third gender and the gender marker ‘O’ was celebrated as a victory for the ‘gender and sexual minorities’ 13 years ago, it has now become a crutch to those like Rukshana. A comprehensive conversation of gender identity beyond the traditional notions of a ‘third gender’ is missing from the current discourse in the country. Nepal’s Ministry of Home Affairs defines the gender marker ‘O’ essentially as everyone who belongs in the LGBTI community. “It is horrendous, the Home Ministry has lumped sexual orientation, gender identity, and sex characteristics (SOGIESEC) [sic] together, whereas they are three different things,” says Rukshana.

At present, a trans person in Nepal is legally compelled to be listed as ‘O’ or ‘third gender’. “I had always wanted to mark ‘F’ on my papers, not ‘O’,” says Rukshana. There is a notion in Nepal that the third gender is an ingrained part of Nepali culture—a part of ancient Hindu legal text called the Manusmriti, that recognizes the ‘third nature’. Rukshana rejects such claims, “That is just a way to make the queer people sound exotic—the term ‘third gender’ is a neologism that has, somehow, gained wide acceptance since the early 2000s in the queer discourse.” According to her, the patriarchal Nepali society can only think in cisnormative binary. “It is either the ‘M’, or the ‘F’, and whatever else the society thinks doesn’t fit is the ‘third gender’—this is extremely dangerous as it erases the identity of so many,” says Rukshana.

Since Nepal passed a new constitution in 2015, lawmakers have been discussing an amendment to the citizenship act. Already controversial due to regressive laws regarding women’s rights to pass citizenship to their children, the bill also has discriminatory gender provisions that not only limit gender markers to ‘M’, ‘F’ and ‘O’ but also consider requiring proof of sex reassignment surgery for those who want to take the ‘O’ marker. Human rights activists, including Rukshana, have called for the condemnation of this new provision and argue that seeking evidence of gender is invasive and against the right of an individual to self-determination.

As a queer rights activist, Rukshana has found it challenging to change the discourse around gender recognition in Nepal. “The ‘third gender’ category and the ‘O’ gender marker was achieved after such a big fight, and that has made it sacred,” says Rukshana, “Any good movement evolves, but critical discussion and challenge of the old-school ideas of SOGIESEC [sic] is not taken as constructive criticism but as a personal affront.”

In 2018 Rukshana came together with two other like-minded activists and formed the Queer Youth Group and the Queer Rights Collective in an attempt to introduce progressive critical discourse on gender, sexuality and queer people and to put intersectionality at the core of the queer movement. In 2019 the group organized its first pride parade in Kathmandu in June. “There have been many LGBTI marches in the past, particularly one that is successfully organized every year in the autumn, but we wanted to pay homage to the struggle of the movement, and mark the pride month.” In their first pride parade, the organizers emphasized intersectionality of supporting queer people who are Dalit, Madhesi, ethnic minority, indigenous, and people with disability. This year the parade moved online due to the COVID-19 pandemic with virtual sessions and on social media networks.

On 31 March to mark the International Transgender Day of Visibility, the Queer Youth Group released Transgender Demand Sheet asking the government and legal bodies to address gender recognition of binary trans persons. The document says that there should be provisions for transmen to be able to check off ‘M’, and trans women to be able to check off ‘F’. It asks for the amendment of documents of trans people that has sex and name assigned at birth with their lived gender/gender identity and their preferred name. The document condemns misgendering and demands provisions to address people with preferred pronouns and terms. They demand policies so transgender women are seen under the umbrella or women and transgender men under the umbrella of men. They question the need to disclose gender data in government documents. “We reject the ‘O’ option on gender identity, instead advocate for the ‘M’ ‘F’ and ‘X’ markers,” says Rukshana, ‘We can further add a ‘T’ (Trans) marker in the context of Nepal. However, she is concerned that the mere introduction of the ‘X’ and ‘T’ markers, without proper laws that secure rights, could further lead to exclusion and discrimination.

Rukshana’s activism and interest in issues of identity and inclusion recently took her to York University’s Centre for Applied Human Rights in the United Kingdom, where she spent four months as a fellow. While at York, Rukshana has had a new awakening about the path her future will take. Apart from being a queer rights activist, Rukshana is also vocal about indigenous rights. “With a little distance, I was able to figure out that everything is related to law, and I have now decided to pursue law studies,” she says. She hopes that law schools will have more liberal and open policies towards trans people.

Over the last few years, through her interaction with bureaucrats and government officials, Rukshana has seen a few positive changes. “At least they have stopped using the word third gender while referring to my case when they reply to my letters where I identify myself as a trans woman,” says Rukshana adding, “Language is power, and I see this as a change in the positive direction.”

As we wind our conversation down and walk out of the café the haze has lifted, but the dry April air, mixed with dust hits us. Kathmandu spring wind brings dust that can be blinding, but Rukshana flicks her hair and walks almost unperturbed. She mentions all the hate and trolls she meets online only in passing. “They are like dust, they come and go,” she says with her trademark Rukshana laugh. She is more excited about what awaits her and quickly lists all the future projects she is looking forward to, “All these culminate into one clear goal and that is to change the status quo.”

Mallika Aryal is a Nepali freelance journalist based in Oslo, Norway. She writes, edits and produces pieces and multimedia stories on identity, human rights, and social justice. She is available on Twitter and Instagram as: @mikaness