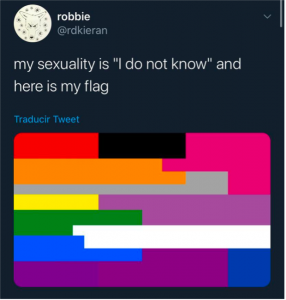 A google search with the words “types of pride flags” will offer hundreds of articles by newspapers, journals, and blogs often titled along the lines of “12 different pride flags and their meanings” or “9 of the most iconic and inclusive pride flags explained” or “All 20+ pride flags explained!” These pride flags have origins from well-loved politicians to Tumblr artists. The internet is a space where individuals can design their own flags or redesign existing ones to fit their preferences. There is a wealth of experimentation and art on social media and discussion platforms that deserves acknowledgement as expressions of identity.

I have met individuals across the spectrum of gender and sexual identity, and within the LGBTQIA+ community, there seems to exist a secondary spectrum of label importance. There are those who devote themselves to finding and creating words to describe themselves, and there are those who prefer not to label themselves. One New Zealand study discussed the willingness to identify as a “gay man” amongst different age groups and ethnicities, finding that many of them prefer not to use those labels such as “gay” or “homosexual (“‘Aren’t Labels for Pickle Jars, Not People?’”).”

In contrast, a study on LGBTQIA+ youth showed the surveyed group is more willing to settle into identity-defining labels. While there are those who still prefer not to put words to their gender or sexual identity, there are plenty who identify as “trans” or “bisexual” or “nonbinary” (Carolyn M. Porta et al., “Perceptions of Sexual Orientation and Gender Identity Minority Adolescents about Labels,”). Some do not use labels because they feel like they are still discovering who they are, or they do not resonate with any of the options they have found thus far. Some of the participants in this study use the word “queer” as an umbrella term to mean a variety of different identities (Porta et al. 9).

With younger generations more willing to change and challenge labels, identifiers continue to change. Although the authors of that youth study (published in 2020) describe the labels of “pansexual, queer, non-binary (Porta et al. 3)” as “non-traditional,” both “traditional” and “non-traditional” gender and sexual identities are being reevaluated in significant ways. Through forums, blogs, and other discussion platforms, the younger generation has demanded a safe space to experiment with new identities, including new ideas about sexual norms and gender expressions. The result has been hundreds of new flags, many for “non-traditional” genders or sexualities, and many others to reimagine the colors or meanings of “traditional” pride flags. Colorful flags in social media posts are an easy attention-grabber to invite sexuality- and gender-questioning audiences to listen to new ideas, which has caused a shift in the understanding of gender and sexuality in the younger generation, myself included, to one of openness and acceptance.

Finding what flag(s) an individual belongs under can be just as challenging a task as understanding one’s own sexuality. I prefer the terms “gay” and “asexual” and use she/her pronouns. I usually prefer “gay” as supposed to “lesbian” because I would rather use gender-neutral language when referring to myself. I use “asexual” to mean that I do not experience sexual attraction to any gender, but I do not have such a solid label for how I experience romantic attraction. There are several flags I could choose that would represent different communities I identify with, including (but not limited to) the Rainbow flag, the Progressive flag, the Lesbian flag, the Asexual flag, or any redesigns or alternatives of these flags. With so many options, how can I decide which one(s), if any, represent me?

The original pride flag was designed by Gilbert Baker in 1977, a friend of Harvey Milk, the first openly gay public official in California. Until that point the generally accepted symbol of Pride was the Pink Triangle, which gay and lesbian individuals had reclaimed from its use by Nazis. Controversy over the origins of this symbol stirred Baker to design the rainbow flag: “I thought a gay nation should have a flag too, to proclaim its own idea of power” (Baker 36).

Arguably the second most recognizable flag, the Transgender Pride flag, was designed and debuted by Monica Helms in 1999. Helms, a Navy veteran, was urged by Michael Page, the designer of the Bisexual Pride flag, to create the flag (Beemyn). This flag adopts pink and blue, the traditional colors ascribed to babies at birth according to their sex, with a white strip in the middle that signifies intersex, nonbinary identity, and transitioning. 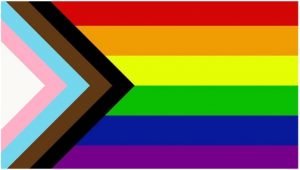 Alternatives to the commonly accepted flags exist and are met with mixed reactions. Probably the most notable of these alternatives is the Inclusive Progress Flag designed by Daniel Quasar. It uses the colors from the Philadelphia Flag that incorporated brown and black stripes to acknowledge Persons of Color and individuals with AIDS. The most notable addition is the inclusion of Transgender identity in the flag. Met with overwhelming positivity, the Progress Flag has been recognized as a necessary step towards inclusion in the LGBTQIA+ community. Academic institutions and activists both are striving to make this flag the norm in order to recognize all who are part of the LGBTQIA+ community as well as acknowledge those who have fought for equal rights.

Not all flag alternatives are met with equal enthusiasm. The Polyamorous flag was designed in 1995 by Jim Evans to propose

the use of the pi symbol to identify other polyamorous individuals. In recent years, several groups have expressed their dislike of the flag, including a Reddit discussion with over 160,000 subscribers. The overwhelming majority agreed that the flag needed an update, and many alternatives were spawned. 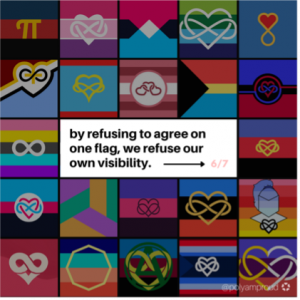 Polyamproud is an organization that decided that there are too many redesigns, and that there should be a singular consensus on the Polyamorous flag. They propose a committee dedicated to deciding on a singular inclusive flag for the Polyamorous community. While this would establish a single banner to unify a large group of people, it could erase the individuality and expression added by the nuances of each different flag.

Polyamorous flag discourse is unique in that few, if any, other groups seem to take issue with the prevalence of flag alternatives. The Inclusive Pride flag, while being recognized as a step toward much-needed diversity and inclusion within LGBTQIA+, is not the only acceptable Pride flag. In my experience, the original Pride flag is still the most used and is considered just as valid. Polyamproud’s argument about the lack of a singular Polyamorous flag creates division where none need exist: one flag is not more valid than another. The organization wants a rallying flag like the Pride flag but fails to recognize that the Polyamorous flag might actually be a descriptive flag whose purpose is to use visual cues to explain the identity of an individual. 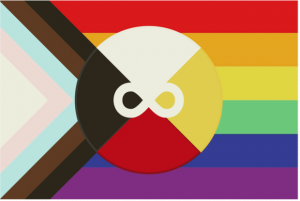 There are groups and individuals on social media who make these sorts of descriptive flags for specific groups or people. Many of these flags are attempts to bring together multiple identities into a single flag. For example, Tumblr user @cedar-maw combined flags specifically for “Indiqueer/Two-Spirit [individuals].” While specifically “For Natives only,” this flag ties together Indigenous identities of being Two-Spirited (a Native gender identity apart from the binary male and female), being Queer (part of the LGBTQIA+ community), and having Native Pride (a person from an indigenous community in North America). The Métis Infinity symbol, in addition, can add the label of mixed heritage (specifically Native and European descent). This flag, unlike traditional pride flags, is meant for a specific group to find identity rather than a larger group to fit under an umbrella term.

A subsection of gender expression discussions includes individuals who claim colors and designs to represent their own unique gender. While these flags can be a colorful representation of one person’s gender identity or expression and can convey their accompanying neopronouns (an individual’s preferred pronouns apart from the grammatically acceptable she/her, they/them, xe/xer, etc.), many of these flags stem from a collection of interests. They are hyper-specific designs that 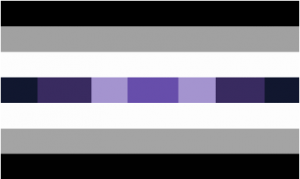 link one or more identities with a customized pride flag. Tumblr user @themogaidragon is one account that designs pride flags at the request of other users. One of their anonymous requests is for a “libracaelgender” flag, which the designer explains encompasses two things: “Libragender is a gender that is mostly agender, but has a partial connection to another gender. Libragender people tend to feel between 1-49% of a connection to another gender. Caelgender: a gender that is aesthetically centered on space-related things; a gender that is aesthetically associated with space/the cosmos.” This flag is the fusing of two other “neo-genders” that focus both on gender identity and gender expression. The individual that requested this flag might feel that they are agender (without a specific gender identity) some of the time and another gender other times. They may also express their gender by having a general outer space aesthetic. Like many others, this flag contains multiple identities of an individual or small group of people.

There is a key difference between these new individualized pride flags and the original Gay/Lesbian/Trans/etc. flags: their purpose. While the Gay Pride flag first flew as a rallying banner for any individual that we would, today, consider LGBTQIA+, these new flags are meant to be used as visual and symbolic descriptors of a single person, uniting them under LGBTQIA+ but separating their identity from the rest of this quickly growing umbrella term. A recent Gallup survey found that one in six adults in Generation Z (ages 18-23 as of 2021, according to the survey) identifies as LGBT. In a culture that values individuality, it should be unsurprising that the spectrum of Western gender and sexuality identity could become so individualized.

The prevalence of so many pride flags may be indicative of an age of hyper-identity where a “coat-of-arms” is an artistic rendering that corresponds not to a shared family but of a personalized sexual/gender identity or expression. Access to art and digital artist tools could allow anyone to design a flag that they feel represents their identity within the LGBTQIA+ community. As a member of the LGBTQIA+ community, it is my job to support individual identity however one sees fit to identify and express themselves. This age of self-discovery is made possible by internet platforms where anyone can add any idea. Regardless of labels, we share the ownership of a flag that describes an individual in all their preferred identities. I advocate for the further research of these identities so that non-minority orientations and identities can understand and accept the creativity and individuality that these flags have provided us.

“9 Of the Most Iconic and Inclusive Pride Flags Explained.” Accessed January 11, 2022. www.archipanic.com/pride-flags-graphic-design/.

“The Polyamory Flag Is a Grim, Confusing Failure. Let’s Do Better.” Polyamory in the News. Accessed January 11, 2022. polyinthemedia.blogspot.com/2019/10/a-new-polyam-flag-that-fits.html.

Lauren (Lorynne) Alexander is an undergraduate Asian Studies and Anthropology major with a minor in Linguistics at Furman University. She plans to continue her linguistic studies as far as they can take her. While her study of interest is Proto-Japanese, she enjoys a wide variety of topics. When not trying to convince her professors to let her write papers on the Mughal Empire, she can be found with large fantasy novels or surfing social media platforms for new meme trends.