The concept of body politics has been traditionally and culturally practiced in our society through ages. The concept suggests how the outer appearance of an individual is policed by the ones in power based on the societal standards of what is considered acceptable. Many factors figure into the idea of the ideal body. The classification of bodies is not new. Society ranks individuals based on their type of bodies, and this ranking affects their chance of getting promoted or hired, having romantic partners, or receiving proper medical treatments. The cultural context of this classification system can always be traced back to racism, slavery, and Eurocentric beauty standards.

When discussing the politics of bodies, fat shaming is a prevalent topic. Fat shaming refers to a specific type of discrimination faced by those who do not fit society’s standard of an ideal body and are larger in appearance than the conventional type of bodies. Fat shaming has been practiced globally for decades. Despite being such a widely known universal issue, however, it rarely gets talked about.

There is a common misconception that shaming people for their appearance or appetite will somehow motivate them to lose weight. However, that belief has been rejected by doctors and professionals using multiple forms of evidence over the years. Studies show that fat shaming leads to people to feel terrible about themselves, which induces extreme stress and eventually may cause them to overeat as a coping mechanism. Especially in the age of social media, the discussion of health and obesity typically turns into harassment of fat people, which can be simply ruled as cyberbullying. At the end of the day, fat shaming is a manner of bullying and harassment.

The effect and psychology of fat shaming goes deeper than being harassed online and overeating. Growing up as a person who is considered ‘fat’ in society can exacerbate the way individuals view themselves. Confidence is key when it comes to presenting ourselves in front of society, and ‘looking good’ is just a mindset that can be achieved by feeling content with the way we appear. However, the confidence of people with plus size bodies and how they view themselves is affected majorly by society. Nowadays, a lot of fat people are seen owning and accepting their bodies, using it to make a statement, and looking good in their own style. Unfortunately, it has not always been like that. In contrast to a person with a conventional body type, plus size people struggle a lot more to gain self-confidence and presenting themselves the way they would actually like to. The fashion world and media both play vital roles when discussing different types of bodies and how they are perceived in society.

If one observes plus size characters in media, one can easily trace a pattern on how they usually dress. The clothing of plus size characters is always more modest and conservative than their counterparts, and frankly shapeless. It can almost be interpreted as if the creators want to hide their bodies with as much fabric as they can. Let’s look at an example to understand the argument better. 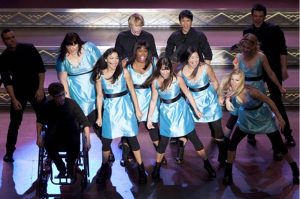 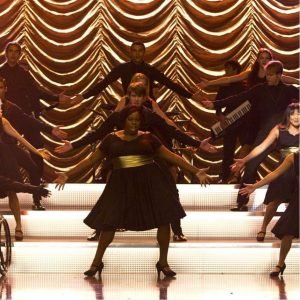 Above are two screencaps from the popular TV series known as ‘Glee’. It is clear that in both images, all the girls are wearing uniforms to synchronize their dance performance. Despite the uniform being sleeveless, the plus size characters can be seen wearing longer sleeves, which makes their outfit more conservative than their counterparts. It should be taken in consideration that sometimes it’s not only the costume designer who makes this decision. A lot of times, fat people may feel uncomfortable in revealing clothes and ask their clothes to be altered. However, despite that, it still doesn’t negate the validity of the argument. Media has been dressing plus size people in clothes that do not fit their body shape for years. Most times these clothes are designed to hide the curves and fat of their body. But why? Is it because they are afraid to sexualize them or even portray them as attractive?  By dressing them only in unflattering clothes, the creators are immediately making plus size characters look unattractive when paired with conventionally attractive characters wearing fashionable and appealing clothes. Media does not want the audience to perceive fat people as a point of attraction, which is just a subtler form of fat shaming.

Media is not the only one to blame for this. Even though the media helps promote the idea that plus size people should hide their bodies and only dress conservatively without following trends or styles, the fashion industry is cooperating by bringing the idea to life. Clothing for plus size people has advanced significantly over the years, but at what cost? A lot of brands can be seen taking pride in being inclusive, having options for people with larger bodies to browse. Nevertheless, it has become quite obvious that the brands are inclusive in name only. The products they produce for fat people often lack the quality and appeal that can be found in the sizes made for thinner bodies. Here is one example: 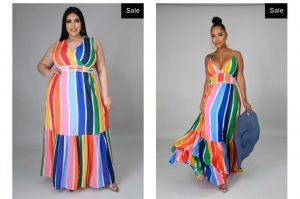 The brand is marketing these two dresses as the same dress in different sizes. However, it is transparent that the left dress does not share a lot of the details and effort put in the right one. The left dress made for plus size people lacks the initial bodice, neckline, straps, and overall presentation of the right one. It can also be observed how the right image has been exhibited with more photogenic features (e.g. the flare, the model’s distance from the camera, etc.) than the left one. The two dresses are not similar.  They may share the same fabric, but they have been altered based on the type of body it will be put on. The plus size version follows the stereotypical theme of a simpler, shapeless, and conservative style.

In the very beginning of this article, I mentioned how the ‘conventional body type’ can be traced back to the Eurocentric beauty standard of our society. It should be clarified that fat people exist throughout races, ethnicities, and cultures. In addition, it should be taken into consideration what actually defines as the best type of body in society. The contemporary  standard for women would be thin waist, thin legs, thin arms, flat back etc. Features also known as ‘model like’. The model-like image usually reaches for an androgynous appearance of a tall and thin figure with flat chest. However, some of these characteristics directly contradict features very commonly found with women of color.

There are lots of layers to this. Nowadays, a lot of the mainly ethnic features which were considered unattractive are seen as more desirable because of social media. Sadly instead of letting women of color get the recognition and be loved for their bodies, their white counterparts imitate those features and alter it to fit the Eurocentric standard better. One of the prime examples would be the Kardashian family, who altered their bodies to imitate natural features of Black women with the help of plastic surgery. As we all know, a body is not just skin and flesh but also our representation in society. Therefore, when white people like Kardashians are seen with those features, they get labelled as attractive. At the same time, the same features are looked down upon when seen on non-whites.

Historically, fat people have been vilified from children’s stories to modern movies. The stigmatization and shaming people’s bodies has been normalized. Non-fat people are taught to believe that discrimination and prejudice are to be expected when one is fat. Society treats fat people as inferior, and they regularly consume stereotypes about fat people in the form of movies, tv shows, books, and music. As a result, many people struggle to accept their bodies and are scared of being or getting fat, but it is not their fault that they have failed to love their bodies. It is our society and culture that has failed them. It is not easy to love and appreciate one’s body in a society where your body is vilified. The key to making a safer place for fat people is to create an accepting and appreciative community. A place where all bodies are valued and respected.