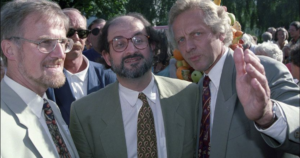 “The Threat of Self-censorship in Publishing” is the title of the speech that William Nygaard, former Norwegian publisher of Salman Rushdie and president of Norwegian PEN, delivered on the screen at the last World Congress for Publishers, February 2018. Nygaard’s broken leg stopped him from being present in person, much to the relief of the International Publishers Association, and the Indian Publishing Association who organized the event. Given Nygaard’s past engagement with Rushdie, the hosts were more preoccupied with the safety of other participants in the congress than they were about the attacks on free speech. The irony, however, was not lost as Nygaard, a publisher, who has never before given up his commitment to free speech, was forced to invent the convenient excuse of a broken leg — in other words, exercise self-censorship — to enable the hosts to organize an event on self-censorship in publishing.

Today’s subject: The threat of self-censorship in publishing calls for a discussion of a fundamental question: are we as publishers, still capable, as expressed in the IPA charter, of promoting and defending freedom to publish, of respecting the principle of copyright, and promoting and defending literacy and reading? Or are we increasingly confronted by the power of extremes, where the demands of pragmatism challenge our basic ideals? This happens when profit becomes the unique aim of the publishing venture existing on a purely commercial basis. Or, when we publishers function as obedient underlings for a political regime or powerful multinational owners. In these cases self-censorship and the chilling effects are inevitable, and our business itself becomes a threat to our ideals.

If, on the other hand, we, as publishers, wish to defend democratic values based on human rights and to stand as defenders of true freedom of expression, self-censorship represents a major threat to our profession, if it is allowed to flourish.

What do we mean by self-censorship? To put it simply: Self-censorship occurs when we censor ourselves or our profession in order to avoid conflict or in fear of personal consequences. Is this really a problem in the publishing world of today? Absolutely.  I think all of us in this room, may cause self-censorship in our respective publishing houses, and more so than our editorial departments. That is why it is a fundamental task for this congress to strengthen our awareness of this phenomenon. An increased understanding of what is at stake can and will make it possible to work against self-censorship, to banish it, and turn it into a taboo for every publishing house subscribing to the fundamental ideals of publishing.

How does self-censorship arise?

The fields of conflict are manifold. Religious and cultural diversity sharpen latent differences. Superficial political correctness may make us too cautious. Economic risk confronts us with dilemmas. And changes caused by new structures of leadership in publishing houses strengthen the threat of self-censorship. It is not just fear of the pressure from outside, a Rushdie fatwa, or a Charlie Hebdo that can function as triggers. The way we work as publishers is just as important.

In other words: The threat of self-censorship in publishing manifests itself on two levels:

In the following, I shall focus mainly on the first of these two elements. How do today’s owners, boards and managements confront these challenges? What changes in publishing structures and recruitment increase the danger of self-censorship? Are we in a situation where self-censorship has become the elephant in the room of today’s publishing structures, the taboo that is never mentioned?

For instance: How many in the present audience are involved in the current process of evaluating manuscripts? How many of you meet with writers regularly? How many exercises a direct editorial responsibility? Of course several of you still do. All the same, I maintain that we have seen considerable change in the professional background of the delegates of the IPA over the last thirty years, mirroring changes in leadership and responsibilities.

In this period publishing houses have grown, as a result of national and international mergers. Leadership based on the so-called Publisher model, where the head of the company is responsible, not only for the bottom line but also for editorial strategy has been abandoned to a large extent. The global liberalist wave of the late eighties caused an intensified focus on size. The chase for quick profit pushed more long-term literary goals aside. A culture of greed developed that also hit the media and the world of publishing. The first big mergers came already in the seventies, strongly motivated by the possibilities of new media technology, and the new multimedia groups were promised a golden future.

After this period of more or less successful mergers, one essential question remains: What happened to the independence of editorial decisions and strategies, a «sacred» principle that is based on absolute non-intervention in editorial matters from board and owners? As publishers with a more traditional literary background were replaced by leaders with experience from finance, the distance between editors and top management increased. Pressure for increased profitability led to more power for economic considerations and more pressure from marketing departments, weakening the influence of professional editorial competence.

Short term thinking replaced the will and courage to make room for an editorial policy with long term prospects. Mentalities changed, opening up for self-censorship and an overly cautious editorial approach, based on secure, more commercial thinking. The work on an active backlist was significantly reduced. New methods also lead to an increasing homogeneity in the lists of publishers that used to make their mark in publishing because of their innovative and diverse literary fiction and non-fiction, but now were reduced to mere imprints. The search for new literary fiction suffered, particularly in the American and British markets, making it very hard for colleagues from the rest of the world to find new significant literary voices to introduce to their own reading public.  The appearance of small publishing houses have to a certain extent remedied this situation, but far too often they are swallowed up by the big corporations, with depressing consequences.

Publishing houses concerned because of the development of rights’ sales, particularly in the Anglo-Saxon countries, realized that they had to explore and secure new avenues for maintaining their own rights and those of the writers. The writers and their organizations demanded it, and the pressure caused by an increasing number of big competitors made it necessary.

In Norway the publishers’ and writers’ organizations negotiated a  ground-breaking standard agreement in 1990. This agreement secured a standard royalty scale for the authors. But a crucial element in our context was the establishment of the right of the publisher not only to the primary publishing rights but also to sub-rights and foreign rights, implying of course a follow-up duty. This was considered a victory for the role of classic publishing in an epoch of drastic changes.

One sector that has thrived in the wake of the obvious vacuum created by the standardization of corporate publishing, is that of the literary agent. The literary agent of today has taken on many of the essential tasks that fell by the wayside as publishers moved on towards global mergers.

Today’s agents come up with ideas, they recruit writers, are dedicated readers of manuscripts, and demand that rights both for backlist and new titles are taken care of in the author’s best interest, on a literary and professional as well as on an economic level. But on the other hand, their activity has meant increased economic pressure on publishing houses, which have to spend heavily on buying rights instead of handling and developing them themselves. It has also affected the author’s profits.

How do today’s editors feel about their role? What happened to «hands-on publishing» carried out by dedicated publishers and editors, anchored in a firm belief in the importance of long term strategy, taking care of their authors and enabling them to flourish, building a strong national literary tradition, and also in due course bringing about financial success?

What many publishers have refused to acknowledge in the thirty years that are now behind us, is the fact that for the publisher the ideal purpose of taking on our share of responsibility for the development of our respective societies, and guaranteeing freedom of expression, is the very key to profit, if measured properly. This remains a paradox in today’s liberalist publishing industry.

Luckily there are brilliant examples of the opposite in today’s world, where publishing groups are run in complete accordance with our ideal purpose on all levels. And the paradox is that this long-term focus on quality, based on a confident interaction with writers and society, will guarantee a profit in the long run. Self-censorship, as an undermining threat to honest quality publishing, is kept at bay. And the publisher’s role as guardian of freedom of expression is secured.

As I stated in my opening remarks, self-censorship is based on fear and leads to the chilling effect; fear perhaps of economic risks, fear of reprisal, such as the threat of losing your job, of being demoted, or being passed over for promotion. Self-censorship may be triggered by fear of standing out, of leaving the safety of group consensus, of not being politically correct. This is definitely a dilemma in the Nordic affluent societies. Fear may be triggered by the rules of law, concerning defamation, or blasphemy (the law against this has been abolished in Norway), or by hate and racism.  Despite all this, what keeps a publisher going is the firm belief that the ideal and creative dimension of publishing outweighs personal risks.

Bur fear may also spring from other threats. In authoritarian regimes,  the pressures of political power and public persecution of a publisher remains a frightening dimension. It is not a representative factor in our discourse, because it’s a very extraordinary character surpasses our context. All the same – we are witness to extreme bravery from publishers who endure enormous pressure, from the extremist regime in Turkey for instance, and in many other countries where freedom of expression is perceived as a threat. As president of Norwegian Pen, I have personally witnessed the pressure that Turkish publishers and journalists have to stand up to. In such countries, the situation is so extreme that my earlier warnings in this speech about forms of leadership do not apply. Their struggle is personal and existential to a degree that goes way beyond the working terms we know from democracies. This is the case for every regime on the list of nations that suppress freedom of the press and freedom of expression.  We all know the World Press Freedom Index,  where Turkey, Iran, Saudi-Arabia, and China are all near the bottom in this ranking list covering 180 countries.

What we wish for are publishers who can remain steady, come hell or high water, committed to the protection of the entire literary landscape, non-fiction, children’s books, and educational literature, and standing up for a truly controversial versatility.

What we wish for – in spite of marketing-based commercialism and global publishing groups – are publishing houses that truly understand the essence of editorial obligation in our day and age, that commit to it with the deepest respect for human dignity, and that is able to create a solid framework of respect for freedom of expression and the fight against self-censorship. At the end of the day, it all comes down to leadership and purpose in all kinds of publishing houses, both big and small. It is possible to keep self-censorship in check, and turn fear into courage and commitment to quality.”