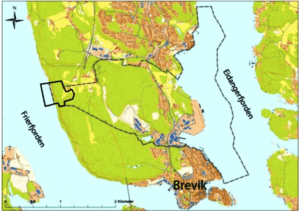 When Norwegian employees started their summer holiday in Norway some months ago, the Minister of Climate and Environment, Mr. Ola Elvestuen, announced that his Department had given the green light for the company NOAH (Norsk Avfallshåndtering AS) to start an impact assessment on waste landfill in the small town of Brevik.

NOAH wants to use the mines in Brevik, where the cement factory Norcem Heidelberg Cement is established today, to build up a landfill of hazardous waste. There are about 250 km empty mines under the town of Brevik. The chalk taken out of the mines, used in the cement factory today, is not enough for the future. Therefore some years ago, Norcem started to buy chalk from Verdal in Trøndelag and ship it to Brevik.

The empty mines in Brevik probably smell like gold for the director Gjelsten in NOAH, since his business in Holmestrand has soon come to an end. NOAH has their main industry in Holmestrand today. Langøya in Holmestrand is a small island with chalk mines beneath. NOAH has filled up this island and its mines with hazardous waste since 1993. From their website: «NOAHsprocess neutralizes acids with ash and other basic waste. Through a chemical process, a waste gypsum is formed which does not pose a risk to the environment.»

NOAH has also «taken care of» hazardous waste from the industry Kronos Titan in Fredrikstad for some years now. Kronos Titan used to pollute the river Glomma with dilute sulfuric acid.Today 200,000 tons of thin acid is transported by barges for treatment and disposal at NOAH’s plants in Langøya. In 2022 the Langøya landfill will be full.  NOAH is a private company that profits in this business of hazardous waste.

«Worldwide, the United Nations Environmental Programme (UNEP) estimated that more than 400 million tons of hazardous wastes are produced universally each year, mostly by industrialized countries (Schmit, 1999). About 1 percent of this is shipped across international boundaries, with the majority of the transfers occurring between countries in the Organization for the Economic Cooperation and Development(OECD)» (en.wikipedia.org/wiki/Hazardous_waste, 09.09.18)

The area around Brevik, Grenland, has already been exposed to considerable amount of pollution since the 1960’s. Grenland is the largest industrial area in Norway. Norwegian industry must change into a greener variant with renewable energy. We also know that people’s everyday life behaviour must change if we are to reach the goal in the Paris-agreement, signed on 12 December 2015.The agreement has three main objectives (Paris Agreement, Article 2):

But if the pollution is already there, and the hazardous waste is already produced, isn’t it a good idea to store the hazardous waste «safe» in the mines under the town of Brevik? We must remember that The Climate and Environment Department, the Government and the Parliament did not make a National plan for how Norway will handle hazardous waste. They did not make a National plan for reducing hazardous waste from the industry, and they did not invest enough financially in the development of carbon capture. This private non-governmental company NOAH wants to start a landfill of hazardous waste in Brevik, and it seems like the Government, without any National plan, will give the entire responsibility to this company. NOAH wants to profit on importing hazardous waste, especially fly ash and sulfuric acid from Sweden, Germany, and other countries estimated to 800,000 tons per year. Something is not sound in this political process. Who will take the responsibility if a huge catastrophe occurs?

Multiconsult, the company with the responsibility for the impact assessment, concludes on September 5 this year that it will be safe to store hazardous waste in Brevik. But the inhabitants in Brevik do not want this landfill of hazardous waste under their small town. The politicians in Porsgrunn’s city council already voted against this industry. How can the advisors in Multiconsult be sure that the chalk mines will not leek in the future? Apparently the impact assessment skipped this chapter. What will happen in the future?

To sum up very shortly what happened, and the list is not complete:

I believe that no one wants the earth to drown in pollution. We experience the negative consequences of climate change all over the world today such as typhoons, tsunamis, storms, rain bombs, forests burning down, fields that dry out, subsea ice melting, release of methane, and so on. Many researchers believe that a safe level of CO2 in the atmosphere is about 350 ppm. In 2017, the level was about 408 ppm (Gore 2017: 39). There are several issues to address if we are to save our lives and reduce pollution on our planet. We are all in a hurry, but we cannot forget the democratic processes while working with these issues, and a private company should not be given the responsibility in this case! As the radical environmental activist Derric Jensen says: “Capitalism creates an elite of a few super-rich, while ever larger masses of people are impoverished. We must take the situation seriously, unite old movements, make new movements and device new strategies to counter the destruction of our world and rising social inequality with decisive resistance.”

People love their hometown, the nature (what remains of it), and the area around where they live, and they don`t want to take another risk. They said no. The inhabitants have used all democratic processes available to them and continue to do so. What remains is the method of non-violent civil disobedience

Voices of resistance, thought to exist in the wild & other essays, Derrick Jensen, 2018

Vivi-Ann Svensen Rotmo  is from Brevik, Telemark. She`s living in Verdal, Trøndelag and work as a librarian and a coordinator for ICORN artists in Levanger.