A person I was connected to online for a joint project suggested that we meet in person after the project was over.

“I read about your story as an exiled writer. I thought it was cool and was curious to meet you,” he confessed, shortly after we met.

That is exactly what I used to think before I experienced exile firsthand. 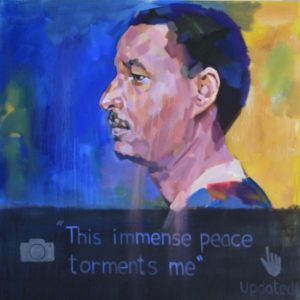 I have lived more than eight years in the U.S.A. as a legal alien; a term that is a constant reminder that I do not yet belong here. Despite my status as a permanent resident, granted asylum to stay indefinitely, I still do not feel grounded. Aside from books, I have been reluctant to buy fixed possessions that I cannot take with me if I move. I have been conditioned to feel as if I am staying at a guest house; ready to pack and leave anytime. When and where? I have no idea.

“A woman of our group says: My village is my bundle on my back,” the poet Mahmoud Darwish writes in “Athens Airport,” a sentiment that resonated with me even before I left my home country, Eritrea.

The usual feeling of displacement has its roots in Eritrea. Like all my Eritrean contemporaries, I have never been allowed to settle. Calls to action have been ever-present: summer campaigns, labor camps, military drills, work transfers, etc. The unpredictable calls and instantly hatched programs have conditioned us not to make any plans of our own.

I never felt rooted to one place and left Eritrea without developing allegiance to any specific neighborhood or city. Even when I try to sound nostalgic or attempt to reminisce, my mind becomes empty. All I am left with is the names of the places and a handful of friends who I know are no longer there. Sometimes I ask myself, what exactly do I miss? I struggle to articulate my thoughts. The knowledge that I can’t return – whether I want to or not – makes me feel as if I am missing something big. I’m incapable of redeeming my loss.

The more I think about the details of “home,” the more I realize it has been reduced to a mirage. Many of my closest friends have fled the country; six of my nine siblings are in exile. The places I had dreamed of revisiting are no longer the same. The same is true for the physical reality of many things I knew before I left Eritrea.

Whenever I leave the U.S.A, which I have done seven times in the last three years, I experience an unusual feeling of comfort upon arriving at my destination. I have been conditioned to adapt quickly, which is possibly a survival mechanism that I developed over time. In my travels, I have difficulty maintaining a clear mental picture of where I came from and where I am heading. I often lose both a sense of home and a sense center during my travels. Although my years in the U.S.A have influenced me more than I recognize, I’m not fully convinced that America is my home beyond the obvious legal and physical realities.

In the summer of 2017, I traveled to Leipzig, Germany to visit a friend. At the Johann Sebastian Bachchurch-museum, a couple and I swapped the favor of taking photos. They told me they came from Australia. “And where are you from?”

“I live in the U.S.A.,” I answered quickly without thinking. I did not elaborate.

My former friends would attest that I was very social, immediately initiating conversations with strangers. That’s no longer the case. Unless unavoidable, my strategy has become staying silent and avoiding random conversations. This strategy became my default after I learned that most conversations would eventually detour into question and answer sessions about my home country. It became nearly impossible to talk for very long without mentioning politics (When did you last visit? How are family and friends at home? Do you call them often?). To avoid this uncomfortable thread of conversation, I began avoiding casual talks with strangers. As for the early days in my studies when I would discuss my country as an example, this changed, too. There’d be times when I would discuss my personal experiences at an event or class, but after seeing and hearing me talk on these occasions, people would approach me and pepper me with endless questions and interrogations.

With the language and cultural shifts came a change in character as well. Although I am not totally oblivious to the developments around me, small talk with strangers began draining me. Then came the reactions to my unmistakable accent, leading to the unwelcome “where is that accent from?” My jokes and casual conversations repeatedly got misconstrued to such an extent that I finally concluded that I’d be better off keeping them to myself.

Gradually, I became more self-absorbed and aloof. I would comfortably go to bars and cafes by myself, often just carrying a book. Long walks have been a second convenient way to spend my time.

While my physical world was slowly shrinking, it simultaneously expanded through modern communication tools. I transitioned from physical to virtual communications. This has escalated so much that I sometimes ask myself if I have completely transformed into a virtual being.

Not surprisingly, exile and writing opened a new sphere for me, just as it did for many of my colleagues who did not choose to remain silent. I was able to connect with a network of writers, journalists and artists who had fled from tyranny. With them, I compare notes on the types and levels of repression each of us has experienced.

Exile also opened many opportunities for me and created an environment where I can reinvent myself. I have established a solid network that in normal circumstances wouldn’t have been possible. Being in the contact zone of the least accessible country in the world has enabled me to appear on various international platforms and outlets. This has helped me shake off some guilty feelings as if I had collaborated to endanger my colleagues who are rotting in Eritrean prisons. In today’s Eritrea, being left “free” when colleagues are taken into custody is considered a kind of complicity and would prompt suspicion among friends.

Whilst in Eritrea, I eagerly awaited the lifting of pervasive censorship so I could produce without restraint and publish my work that had been unable to see the light of day. Yet, after I left the country and the shackles of censorship fell away, I did not know what to do with my writing.

A lengthening gap in space and time can inspire writers to observe and reflect on their societies from far. Despite this potential benefit, I faced intense writer’s block. Without inspiration for creative writing, I shifted to news media. I concluded that literature was a dispensable luxury in the face of a more urgent desire to tell others about the plight of my muzzled compatriots.

Unable to produce new work, I lacked the drive to publish my earlier drafts. I wanted to reassure myself that they still resonate and read as they did when I composed them in Eritrea. It took me about eight years to publish a collection of my short stories, although almost all were written back in Eritrea and did not even edit them.

I have yet to accept exile as a final destiny, but I do not envision returning to my home country. I have been striving to find the balance between the two. Subconsciously, I believe I have a better home somewhere else – certainly not Eritrea, which turned into an unhomely home, nor the USA, my sanctuary.

With the passage of time, I am aware that I have lost a sense of the reality in my home country. My attempts to reconnect have repeatedly failed. My contacts who either remain inside the country or have left recently would mock me for sounding like a casual observer. This is despite my considering myself up to date with developments there. As time goes by, not surprisingly, my perception of the country is drifting away from the reality of its society. My obsessive and hopeless dreams of returning, however, won’t fade.

Abraham T. Zere is a US-based Eritrean exiled writer/journalist whose work has been published in The Guardian, The Independent, Al Jazeera English, Dissent Magazine, Index on Censorship Magazine, and African is A Country, among others. He tweets: @abraham_zere